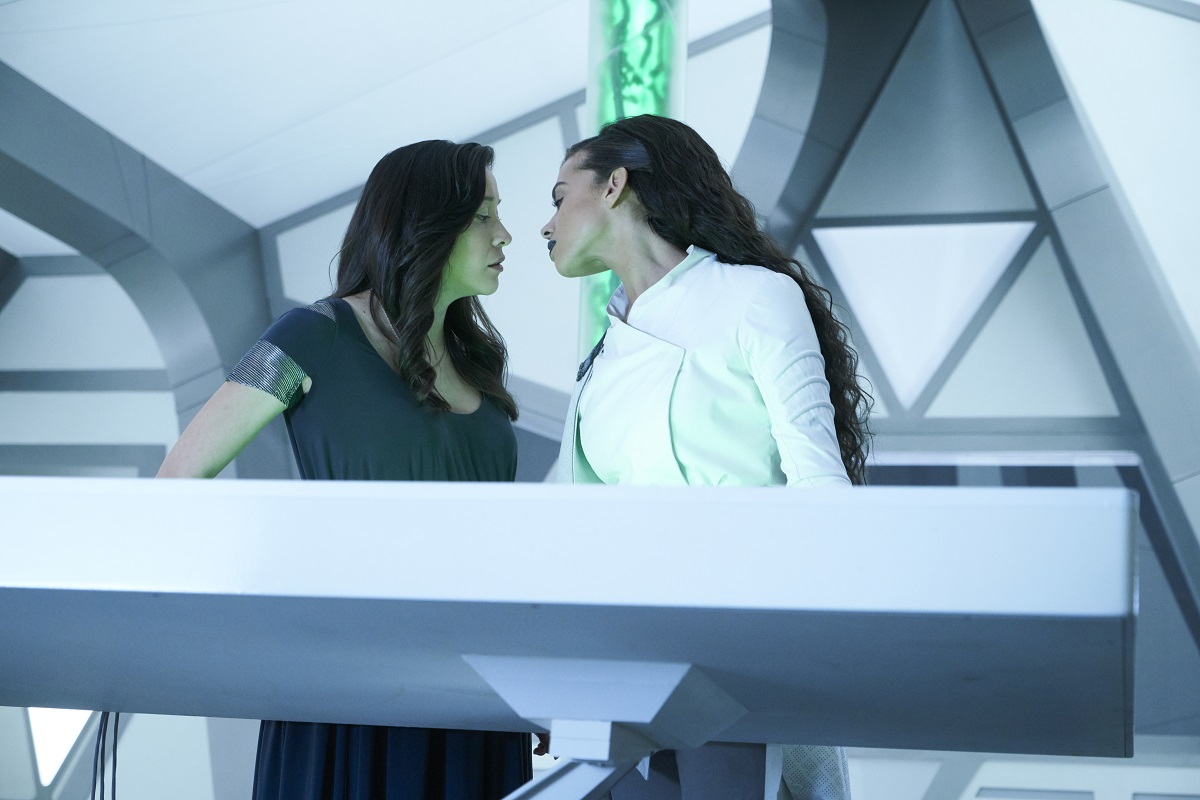 This week on Killjoys, Dutch decides to take the war straight to the Hullen by cleaning house at home. While she’s leading that front, Turin and Fancy try to get intel out of a captured Hullen, and Aneela and Delle Sayah continue their dance. Expect much ass-kicking, quipping, and general awesomeness.

The episode offers a bonus round of fantastic Canadian TV casting, too, with Continuum‘s Erik Knudsen back as McAvoy alongside Luc Trottier as Benji, plus Corner Gas‘s Tara Spencer-Nairn, Rookie Blue‘s Noam Jenkins, and Orphan Black‘s Gord Rand. And even better, the episode is the series debut of writer Shernold Edwards, who gave us so many great Haven moments.

We get to see Dutch revert to basics when the initial plan to divide and conquer the Hullen inside the RAC goes astray and she has a very important conversation with Banyon in the process. The Jaqobis boys have to deal with a Hullen henchman (Jenkins) who wants to do his own dividing and conquering, and Turin and Fancy’s team-up hits its own snag when the captive Hullen (Spencer-Nairn) plants seeds of doubt about Fancy’s alliances.

Up on the SS Batshit Crazy, Delle Sayah is still figuring out where she falls in Aneela’s hierarchy, as Aneela finds her curiosity piqued by D’avin’s drive by last week. There’s so much good stuff coming for the ladies in the next two episodes, and today I chatted with Mayko Nguyen about getting to play Delle Sayah for three seasons. I’ll have the full interview after next week’s episode airs on the East Coast, but here’s what she had to say about Delle Sayah’s motivations and coming back this season with such a juicy arc.

Like most of us at home, Nguyen was pretty sure Johnny had finished off Delle Sayah in last season’s finale, so she was surprised and excited to find out Delle Sayah had indeed survived. “I had no idea [how long the role would last]. That first year, I knew as going to have a couple of episodes. Even last year, I didn’t know that I wasn’t dead,” she says.

“I didn’t find out I was coming back until closer to when they were shooting Season 3. I assumed I was dead like everyone else. I had no idea the role was that much bigger this year. They’ve brought back other characters, so I thought, ‘They can’t bring me back. That’s too much.'”

Delle Sayah was the first one to experience Aneela’s insanity and wrap her head around that fact that although she is a physical ringer for Dutch, that’s where the similarities end. Nguyen has done a masterful job playing that balance of terror and admiration. “I think the fact that she looks exactly like Dutch is not lost on her and she’s trying to figure out what that’s about. And the way Hannah plays her, she is such an enigma,” she says.

“I think she’s caught up in who this person us. Delle Sayah is incredibly, always opportunistic. If she sniffs power anywhere, she knows to align herself with that. I think she’s fascinated but simultaneously always aware of where she can fit into the scheme of things. I think, if anything, Delle Sayah is just really impressed [with Aneela]. As badass as Delle Sayah is, she could never do some of the things Aneela does.”

“Is she a bit scared? Yes, but part of that is she doesn’t really know where her place is or what her part is in all this, but Aneela is so volatile, so Delle Sayah is always aware it’s a delicate balance. I think she’s all for whatever Aneela is doing as long as she’s secure that she’s beside Aneela when she’s doing it. She knows that dynamic can switch very quickly and she’s riding that balance.”

“You don’t get to see [Delle Sayah’s] vulnerability very much. With Dutch it doesn’t come out very much, she doesn’t need it to come out. Aneela opens that up for her. I find doing stuff with Aneela is nice because there’s more to play, and more to delve into for Delle Sayah’s character with Aneela.”

We’ll see more of that over the course of the season, and I’ll have the rest of my interview with Nguyen next week. Killjoys airs Fridays at 8/7c on Syfy in the US and Space in Canada. Come live Tweet and start tagging those Tweets with #RenewKilljoys! Here’s a sneak peek of “Attack the Rack.”

The Cast of Dark Matter Talks S3, Going to Earth, Who's the Bigger Bad

Thom Allison Talks About Killjoys "The Lion, The Witch, and The Warlord" [Exclusive]