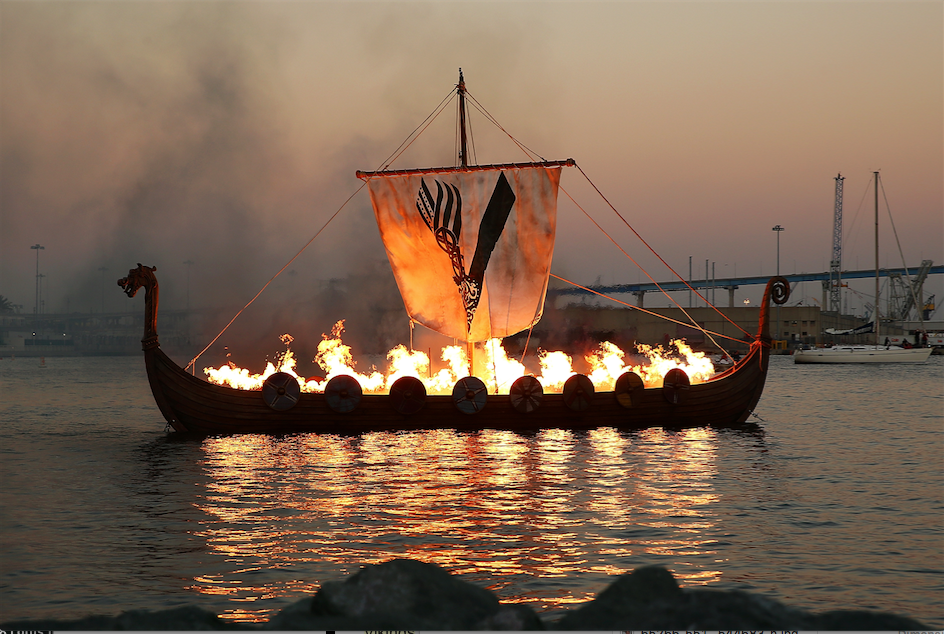 The death of Ragnar during season four ofÂ Vikings wasn’t unexpected but it was a deeply emotional loss, which is a testament to how attached viewers are to the character.

At this year’s Comic-Con, HISTORY decided to help the grieving process along by providing a proper Vikings funeral fit for the King.

On Friday, July 21, fans gathered for a procession that started in San Diego’s Gaslamp Quarter and led into a waterfront ceremony where there was a floating 45-foot replica Viking long-ship complete with pyrotechnic display.

Helping remember Ragnar and other characters lost along the way, were some of the Vikings actors including Katheryn Winnick (Lagertha), Gustaf Skarsgard (Floki), Alexander Ludwig (Bjorn), Alex HÃ¸gh Andersen (Ivar the Boneless) as well as the show’s creator/writer Michael Hirst.

More Photos from the big event:

While Travis Fimmel wasn’t present at the funeral, he did do his part to help fans still mourning his character. He showed up at Friday’s Vikings panel…in a kangaroo suit.

The Ragnar-less era of Vikings has already begun. It is set to continue this fall. Here’s what to expect from the show when new episodes return:

Season five begins with Ivar the Boneless asserting his leadership over the Great Heathen Army, while Lagertha reigns as Queen of Kattegat. Ivarâ€™s murder of his brother Sigurd sets the stage for vicious battles to come as Ragnarâ€™s sons plot their next moves after avenging their fatherâ€™s death. Bjorn follows his destiny into the Mediterranean Sea and Floki who is suffering from the loss of his wife Helga, takes to the seas submitting himself to the will of the Gods. This season is full of startling alliances and unbelievable betrayals as the Vikings fight to rule the world.

The fifth season of Vikings premieres on Wednesday, November 29 at 9/8c on HISTORY.

The Eight Most Brutal Moments from the UnREAL Season Finale, “Future”

Moment of Goodness: Johnny Is Back, Justified â€œGood Intentionsâ€