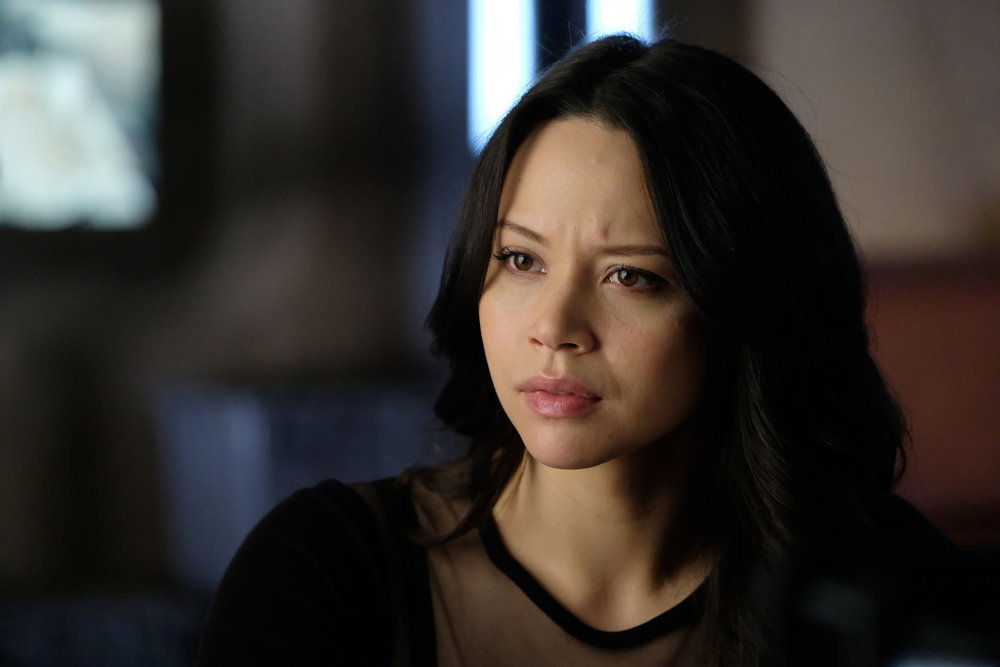 One thing that’s true about Syfy’s Dark Matter is that this show likes to mess with our minds in the most interesting and exciting ways. Last week’s episode featured our Raza Crew versus their alt reality versions. It was double cross after double cross. Battle after battle. At times I didn’t know who was who, you just had to buckle in and sit back for the balls-to-the-wall roller coaster ride. There was even a meeting of the machine minds when Android and Alt!Android took it upon themselves to negotiate and settle things and release captives in what was a wonderfully calm and rational scene.

The real Raza Crew prevailed but you cannot relax for one second on this show. Sure Three was able to visit Sarah in that heavenly plant-filled virtual world she’s created for them. In the last few minutes so much more happened.The Alternates are on the loose. They won’t be laying back in defeat for long. Alt!Two’s strategy was to meet with Commander Nieman presumably to enact revenge on the Raza.

Adrian and Solara made the decision to leave the ship. I, for one, don’t know why they would put space between them and the legends of the Raza. Sure there’s danger at every turn when you’re in their vicinity but those badasses take care of s–t every single time. I’m real sad those two got off the ship. I loved loved loved the addition of Mishka Thebaud and Ayisha Issa to the show and I hope Adrian and Solara make their way back into the action in the future.

And, oh yeah. Two decided Five needed a little quality time with Six because she’s been missing him so much. Unfortunately, the colony that he was on? Destroyed. Bodies everywhere. That’s where we pick up with tonight’s episode.

I’m not going to tease much about “Wish You Could Believe.” Once again, the writers/producers put together a tense, exciting, mess-with-your mind hour of TV. And just like most of the other episodes this season, it’s relentless with the twists. Relentless.

The Official Syfy Synopsis for “Wish You Could Believe”

An injured crew member is haunted by the life they left behind, unaware of the dangers lurking in the present.

Date My Dad Preview: "Moving On'