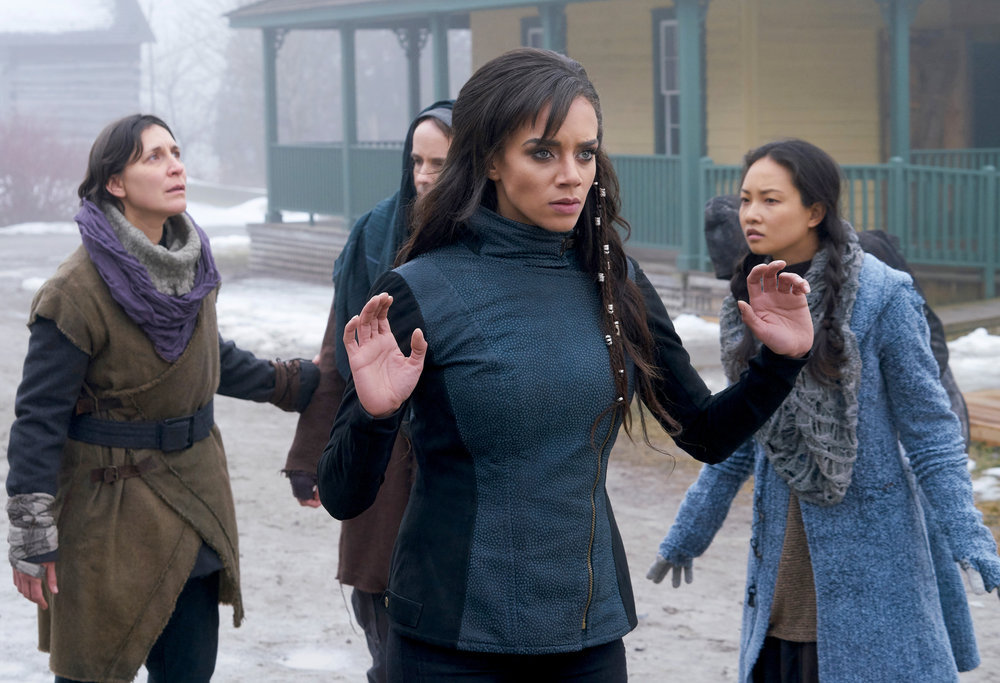 New nerd Zeph finds out there is no learning curveÂ on the next new Killjoys, when the team takes one of the Hullen shipsÂ for a test drive.

That lack of a curve also extends to on-the-job training that amounts to “don’t get dead,” “don’t get anyone else dead, either,” and “there is no I in team.”Â While Zeph is wrapping her considerable brain around that, John is figuring out how to balance coming home with resuming his Killjoy standing (which involves meeting Banyan)Â andÂ getting sucked into a mentor role for Zeph (more on that in my exclusive Aaron Ashmore interviewÂ here).

Dutch and D’avinÂ need him to sort all that out fairly quickly when they find themselvesÂ in a deserted village that would seem to have ties to the Hullen, although the how and the what of that are still a bit cloudy, and the town isn’t as empty as it first seems.Â They also find out a little more about what KhlyenÂ was doing.

Look for Eyewitness‘s Aidan Devine as one of the townspeople who’s particularly disappointed to hearÂ Khlyen isÂ dead and Degrassi: Next Class‘s Sara Waisglass as Quin, a young girl who sheds a little light on that scene from the premiere where D’avin opened one of the ships.

Up on the SS Batshit Aneela, Â Delle Sayah is still piecing together in a state of extreme WTF how she landedÂ where she is, and whatÂ her place is. Aneela’s lieutenant, Gander, (The Expanse‘s Ted Atherton) does his level best to make sure she’s not too comfortable.

It’s another very strong episode thatÂ tries toÂ put more ofÂ the Hullen pieces together and solidify the new dynamic of the team, after a few bumps along the way, of course. I pretty much wanted all of the dialogue on t-shirts, too. My favorite? “Don’t get scared. Get nerdy.”

Killjoys airs atÂ 8/7c on Syfy in theÂ US and Space in Canada. Here’s a sneak peek.

Date My Dad Preview: "Moving On'