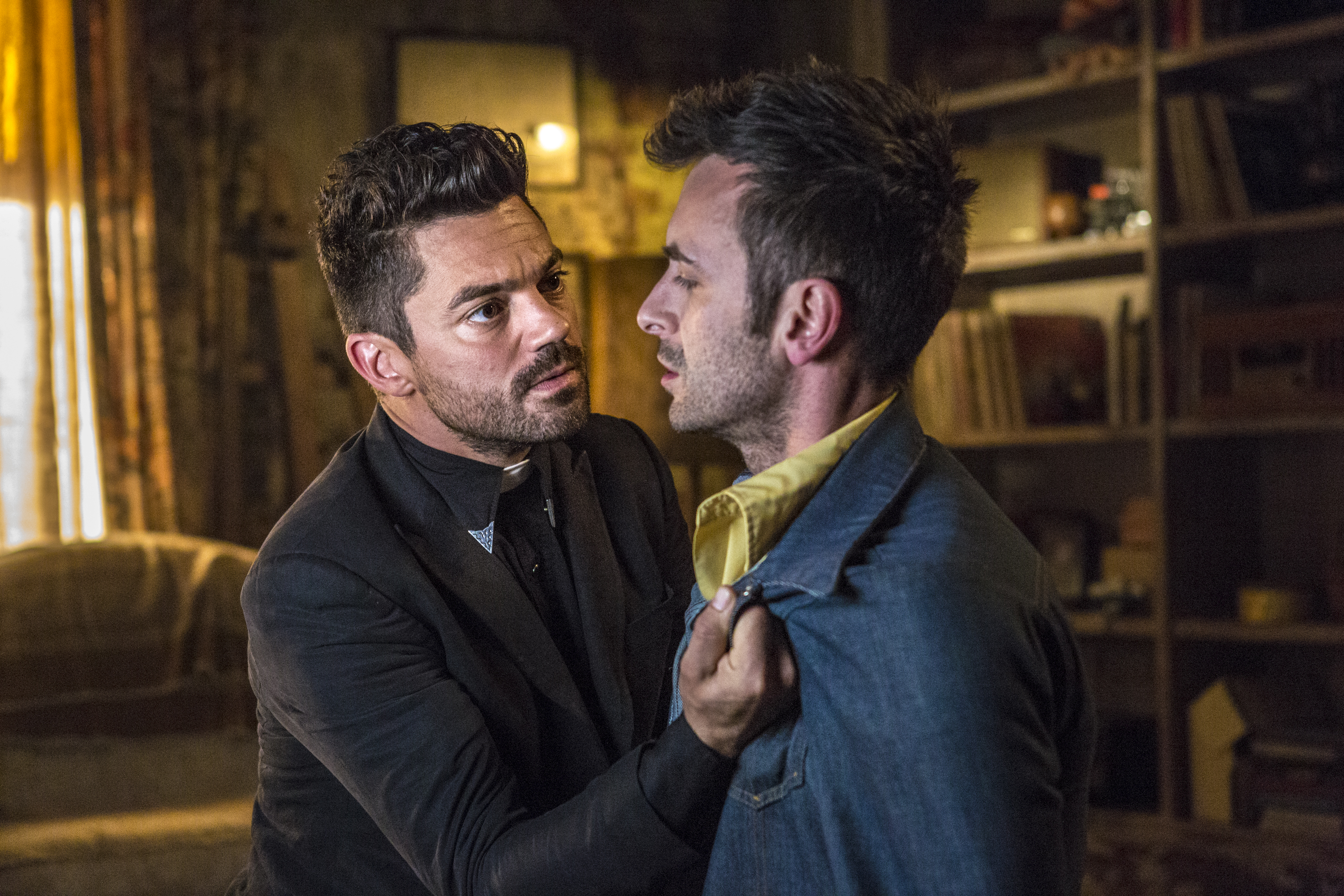 “Viktor” finally brings in the character that has caused Tulip so much angst since we hit the road for New Orleans. While she’s dealing with her past, Jesse and Cassidy are putting the pieces together as they continue to search for God. This episode of Preacher is tension-filled as the show takes its time getting to the big reveals. Here are our three moments of goodness from “Viktor.”

Fake God is a Local Actor

Is there a worse two minutes on TV than poorly done infomercials? They’re on all the time in the middle of the day and in the wee hours of the morning. Preacher managed to capture the essence perfectly with their Katrina infomercial, starring former Malcolm in the Middle actor, Frankie Muniz (who Cass thinks is a “great talent”). While there’s plenty to digest in that scene, Cassidy notices that one of the homeless actors is the same person who appeared after Jesse called Heaven in “Call and Response.”

As luck (or fate?) would have it, he’s managed by a local agent, but that’s where the luck runs out. After hilariously pretending to be representatives of HBO’s Game of Thrones, Cass and Jesse strike out when the agent admits to not having seen Mark Harelik in nearly a year. The trail of breadcrumbs leads them to an audition tape that literally could have been classified as a snuff film because in order to take on the “role of a lifetime,” he had to be dead. (Harelik, by the way, is the real name of the actor who played fake God. After double checking via a Google search, he’s still alive and well, rest assured.)

The journey to reach God is becoming more and more convoluted, and what’s both infuriating and hilarious is that Jesse doesn’t seem to get flustered by anything. In “Damsels,” he learns of a secret religious organization that kills people and wants to start the apocalypse yet barely even blinks. Unkillable marksman from Hell on his trail? No sweat. The laissez faire attitude that Jesse wears is such a wonderful contrast to all the crazy going on around him. Yet, sometimes his cool exterior really frazzles those around him.

Cassidy’s Not So Subtle Concern for Tulip

Caught in the awkward position of pining over his best friend’s girl, Cassidy knows something is wrong after Tulip doesn’t return from her cigarette run. But instead of being upfront with Jesse, he tries to hint that Jess should reach out and check on Tulip. “You don’t think that’s weird?” he keeps asking Jesse. Whether it’s ego, or just another testament to his normal demeanor, Jesse doesn’t assume anything is wrong. Tulip is a hothead, and Jesse assumes she’s still mad about their phone call the night before.

As the episode progresses, Cassidy becomes increasingly more frantic about Tulip’s unknown whereabouts, and watching Joseph Gilgun go from fake HBO executive to concerned best friend is such a treat. How Jesse can’t see the genuine concern on Cass’s face as he brings up Tulip every chance he gets only adds to the viewer’s agitation. The dramatic irony in “Viktor” is absolutely on point.

Tulip and Viktor – The Big Reveal

First of all, Paul Ben-Victor is perfect casting. Preacher has spent two episodes building up the type of person that has enough gravitas to scare Tulip O’Hare; and he’s got it all. He’s got an unassuming stature, he’s a man of few words, there’s little emotion in his tone, and his movements are precisely measured. Of course, all of this comes after he sent a small army of large men to bring in diminutive Tulip. Which tells us that he’s well aware of what she’s capable of despite his show of force.

Without knowing the whole truth, it’s obvious these two have a past that is far more than just casual. The build here is slow. As Viktor gives Tulip some time to walk the grounds and “clear her head,” so too does the audience have time to turn over theories as to how these two are connected. We see Tulip walking through the estate, greeting people by name, she continues to be met with silence and dirty looks, and at one point, is even spat on by Viktor’s young daughter. That seems to be the moment when Tulip stops feeling sorry for herself and decides she’s ready to leave.

Now we get to the action, and what fun it is to see her go from crying and apologizing to beating men twice her size in hand-to-hand combat as she demands to be set free. Despite her efforts, she’s subdued and now has no choice but to answer her husband’s questions as to where she’s been and why she left. Yes, husband. It was less a shock and awe reveal and more a confirmation of suspicions.

Regardless of the how and why, the truth is out and now we wait for the fallout of Jesse finding out as he has Viktor in a headlock to “save” Tulip. After having fought his way through Viktor’s cleaner, using Genesis to get through all the other muscle in the place, I can’t imagine Jesse taking the news well. Not to mention all the use of Genesis has the Saint, once again, hot on their heels as he crosses the Mississippi into New Orleans as the episode ends.

Preacher continues next week with “Dallas,” airing at 9/8c on AMC.