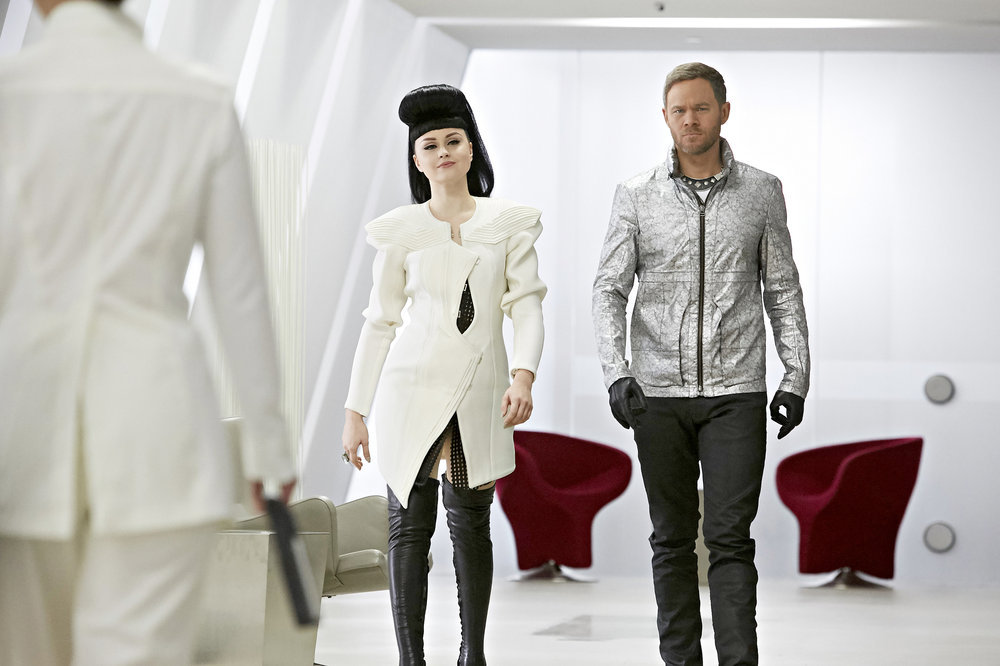 Tomorrow night on Killjoys, Johnny gets himself in way, way, way over his head, Dutch and D’avin audition a few nerds, and we get a VIP first-time meeting.

Nothing in that sentence prepares you for the AWESOMENESS that isÂ Viktoria Modesta going full-on Bond villainess as Niko, a Hackmod with a really, really creepy agenda, or the seriously genius twist that Michelle Lovretta crafted into the episode.

As Johnny Basic and Ollie Ollie Anna (still in love with that)Â keep working on Clara’s disappearance and thwarting Niko’s mwa ha ha-ing, we’re treated to their fun reparteeÂ with a side ofÂ some extra-squishy gore, but since it’s mostly green, where does that land on the gore-meter? Maybe make your viewing food choices wisely?

The trio of nerds that Dutch and D’avin put through their paces at the behest of a still delightfully crusty Turin are played by Continuum alumn Erik Knudsen (also onÂ The Mist this week), Luc Trottier, and spoiler alert if you’re not on social media, new recurring cast member KellyÂ McCormackÂ as Zeph.

I talked to Aaron Ashmore about tonight’s episode and he and Luke Macfarlane about theÂ expanding universe of the show.Â So far, Johnny’s been the only one to dive into the Hackmod world, andÂ Ashmore says it’s been fantastic to add the new faces because they’re fully-realized characters.

“It’s amazing. There’s nothing worse…it doesn’t happen all the time, but [sometimes on a show], the supporting characters and guest actors come in and don’t step up to the plate or the characters aren’t that interesting or engaging, soÂ they feel like their characters areÂ there just for exposition. In our show, I don’t think that’s the case at all,” he shares.

In tomorrow’s episode, Johnny drops deep down intoÂ a Hackmod rabbit hole. “He goes in undercover, and as with many Killjoys missions, things go awry and John ends up in some trouble, but [spoiler alert] he makes it through. I must have pissed the writers off last year at some pointÂ because I get beat up and tortured many, many times in Season 3, so this is the first of many John Jaqobi beatdowns,” he laughs.

“John’s always up for pushing the limits and getting his hands dirty. He doesn’t always do it when he’s with Dutch and D’av because they usually go in and do more of the butt-kicking and actual legwork. I don’t think that John is at all afraid to get his hands dirty, especially when he feels like somebody’s in trouble or something needs to get done.”

“I think he’s been forced into this caretakerÂ position so many times. That’s what he falls back on. That’s what he knows. That’s what he does. I think that’s a huge part of who he is–taking care of other people and doing the right thing, and he’s always had to do that.”

As we saw in last week’s premiere, Dutch and D’avin are now working closely withÂ former foes and now frenemies Fancy and Turin. Macfarlane says that’s been a ball, and there’s some truth in theÂ way Fancy and D’av relate to each other.Â “[Their] dynamic is definitely something that Michelle has in mind. It’s funny, because I adore Sean [Baek]Â and he’s so great,Â but we are justÂ the mostÂ different people, from the way we approach our work to the way we interact with social media,” he says.

“There’s a kernel of truth in, ‘I don’t get you man, but we’re going to work together.’ I don’t want to give too much away, butÂ IÂ ask for Fancy’s help in aÂ very openÂ and earnest way and I come to his defense and it builds to a really lovely reconciliation, I guess you could say. We’ll see how long that lasts.”

While D’av and Fancy find equal footing, things will be bumpier for D’av and Turin. “They come to a pretty serious head. Turin is going down [a dark path] and some of his tactics are, for lack of a better word, a breach of the Geneva Convention and D’avin is a bit of a moral authority and calls him out on that,” he says.

On the lighter side of things, Macfarlane says Patrick Garrow is very accommodating about all the quips about his fabulous hair, including the “Don’t take your haircut out on me”Â line in the opener that I was sure had an outtake of Garrow breaking character. “He’s very professional on set. I honestly don’t know how he handles all the insults about his hair,”Â Macfarlane says. “That’s not the first or last insult [this season].”

Check back in the coming weeks for more from my chats with Ashmore and Macfarlane about Season 3. Killjoys airs Fridays at 10/9c on Syfy in the US and Space in Canada. Here’s a sneak peek of “A Skinner, Darkly.” Pay attention to that title.