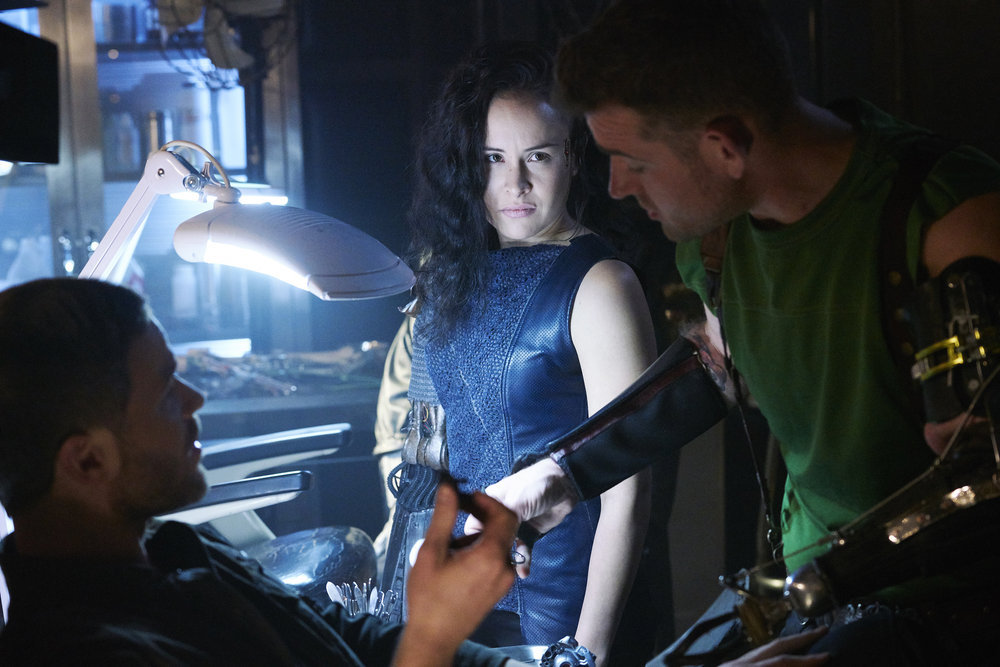 There’s a line in The Cutting Edge, one of my all-time favorite films, where Kate, who’s been assigned yet another partner, in her father’s quest to see her win a Gold medal, tells that partner (Doug) when he calls her out about not being polite, “You’re not going to be here long enough to make it worth the effort.” Because I’m wired weird for points of memory, that line came back to me as I thought about the Season 3 premiere of Killjoys after my second viewing. It was exactly how I did NOT feel about the introduction of several new characters just in the new season’s first hour. I immediately wanted more of them.

First, we met the Hackmods–Clara’s tribe of misfit children who’ve been outfitted, against their wills, with some very killer tech. The one we spent the most time with was Ollie (Tommie-Amber Pirie), who had a meet cute with Johnny over her acquisition of Alice, which she doesn’t remember.

We met Pippin (Second Jen‘s Atticus Mitchell), a black market dealer of anything and everything who was essentially Dutch’s pawn for a bigger prize, but turned out to be useful for the long con. When he worried that Dutch was done with him, she instead invited him in, giving him a purpose for the greater good. Earlier, when they’re arrested, she tries to calm him by telling him that she never gets her people into anything she can’t get them out of. She’s claiming him for the cause.

There’s also a new sheriff in town at the RAC in Banyon Grey (Motive‘s Karen LeBlanc), who’s on a mission to find out why over 400 RAC agents, including one John Jaqobis, have suddenly ghosted. Luckily Turin (and his fabulous, albeit shorter hair) is still working with them, even if it’s off the books.

The fluid way the episode wove in the story of our three core characters, Dutch and the Brothers Jaqobis, and then the extended family they’ve acquired and converted in the first two seasons–Pree, Alvis, and Fancy–there wasn’t a moment that felt forced or too full of people. Instead of worrying about old characters and new jockeying for space, creator Michelle Lovretta simply built a bigger sandbox. All are welcome.

The other marvel there is that we still spent a significant amount of time with our core folks, and there were meaningful conversations among them, and then a bonus one of Johnny Basic (love) confiding in new friend Ollie Ollie Anna (love) that he’s still carrying this fear of being left behind, although this time he is the one who left. When she quietly tells him she hopes he won’t find Clara because she has nobody else, that hits home for him because he purposely left all he knew, but he can talk to her.

That theme of inclusion continues this season. I’ve screened the first four episodes and they expand the roster on both sides of the war with new and old and familiar–not to mention fantastically diverse in every meaning of the word–faces and it’s done so with such organic grace that you’d be hard-pressed to ID the characters who hadn’t been here all along.

TV shows often expand and change due to outside forces imposed upon them and rarely do so in service of the story. World-building that’s driven by the former is usually clunky and obvious. I’ve never felt that way about Killjoys when they expand. I wrote here last season that I’d worried about the separation of our trio and that by season’s end, I’d realized it was fine. There were simply more people at the party.

Killjoys is pretty nimble at setting more places at the table without pushing anyone out of the room. So far, everyone we’ve met (and will meet) this season is there for a reason, and that’s how the show has always rolled. There are no extraneous characters. As we’ve seen in the first two seasons, Killjoys isn’t afraid to kill people. Because it’s sci-fi, we usually question whether they’re really gone. Because it’s Killjoys, it’s a good idea to enjoy them while we have them because we tend to grieve them when they go.

Killjoys airs at 8/7c Fridays on Syfy in the US and Space in Canada. In case you missed it, the season premiere is online now. I can’t wait for y’all to see what’s next! I’ll be back with a preview of “A Skinner, Darkley” later this week. But first, please enjoy Dutch Dutchsplaining things as only she can in “Boondoggie,” and an inside look at Season 3.

The Mist Preview: "Show and Tell"

The Search for God Continues in Preacher "Damsels"