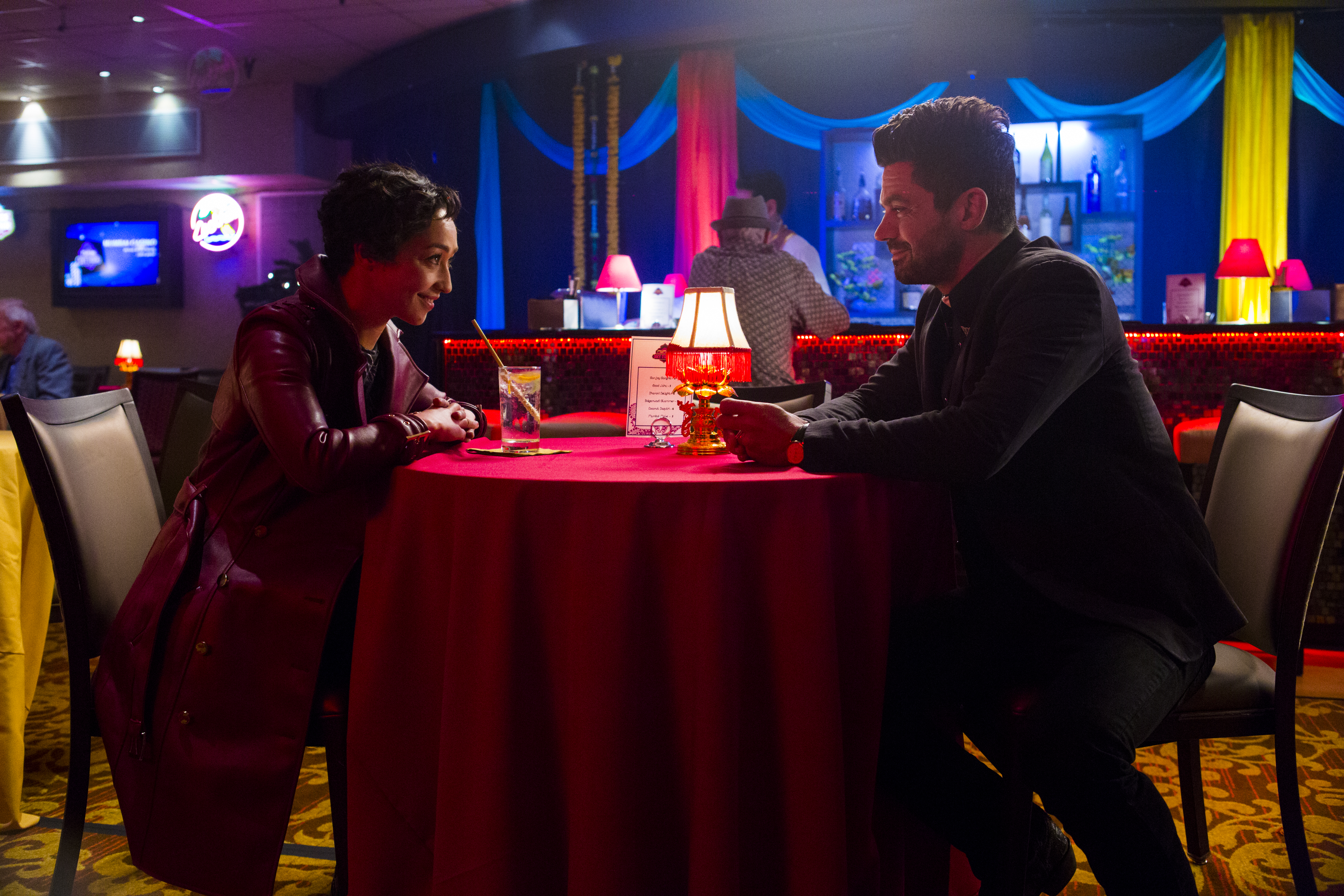 Now that we’re on the road trip to find God, the series has a chance to stick much closer to the comic source material. With the return of an old friend, Jesse and Cassidy think things are looking up. But Tulip’s run of bad luck continues with an altercation with a blast from her past and heavy implications that New Orleans isn’t going to be a cake-walk.

“Mumbai Sky Tower” picks up right where the premiere left off; with the Saint’s bullet headed stragiht for Jesse. Divine intervention, so-to-speak, stops it from reaching its intended target, but the race is on once again to outrun the cowboy. Lucky for Jesse they’re staying at a motel that is hosting a gun convention. Texas is the perfect place to find a gaggle of trigger happy gun enthusiasts who are armed to the teeth and obey his commands.

Straight to the action again as they trio gets away by the thinnest of margins. Cassidy’s Terminator theory isn’t quite as funny to Jesse since they are being hunted by an unkillable thing, but leave it to the vampire to know a guy who knows a guy. When they wind up at a casino, they discover that Fiore is alive and well and has made a name for himself as “The Amazing Ganesh.” A casino in Texas is by far the most absurd thing this series has ever put on screen. The lone star state is a non-gaming state that can’t even buy hard liquor on Sundays.

This entire casino sequence has to be a nod to the comics because after DeBlanc and Fiore were exiled to earth, they got their own casino in Las Vegas and enjoyed all manner of debauchery imaginable. With his best friend dead, Fiore got more than a little pick-me-up from spending just under three hours hanging out with Cassidy.

While Cassidy is working his own route to getting Fiore to help them by calling off the Saint, Tulip and Jesse finally have some time to themselves. Tulip is the only one who seems to feel any sense of now that she knows Annville is gone. Despite her terrible upbringing, her uncle Walter, the town drunk, was the only family she had and losing him makes her feel some type of way. As she and Jesse share a sentimental, post-coital moment, he asks her to marry him.

The quiet moments Tulip and Jesse are sharing inter cut with the frantic and erratic speed ball high that Cassidy and Fiore are riding is like night and day, but somehow very fitting. Cass has been feeling bad about getting Tammy killed (even though he didn’t pull the trigger), he urges Jesse to let him step up here so he can feel like a contributing member of the team. He can read that Fiore is lonely and basically hangs out with him, providing Fiore the opportunity to actually engage in conversation with another person.

There isn’t much story progression with this episode, but this fun and over the top episode are the kind of bread and butter for Preacher. What we do get instead is a sneak peak into Tulip’s past with a man named Gary being violently insistent that she call Victor. Who is Victor? What kind of trouble is waiting for Tulip in New Orleans, of all places? Why does she insist on keeping more secrets from Jesse?

“Don’t forget the music. Whatever it is, no matter the question. Music is your answer. …in the end, you gotta remember the music,” says the depressed lounged singer to Jesse over drinks. Bitter at the success of Fiore’s talent-less act, he acknowledges that violence sells, but music moves, inspires, motivates… If God is a jazz man, New Orleans is as good a place as any to search. Laissez le bon temps rouler!

Preacher returns with “Damsels” next Monday, July 3rd, at 9/8c on AMC.

Back in Action with Preacher "On The Road"

Once Upon a Time “Lily”