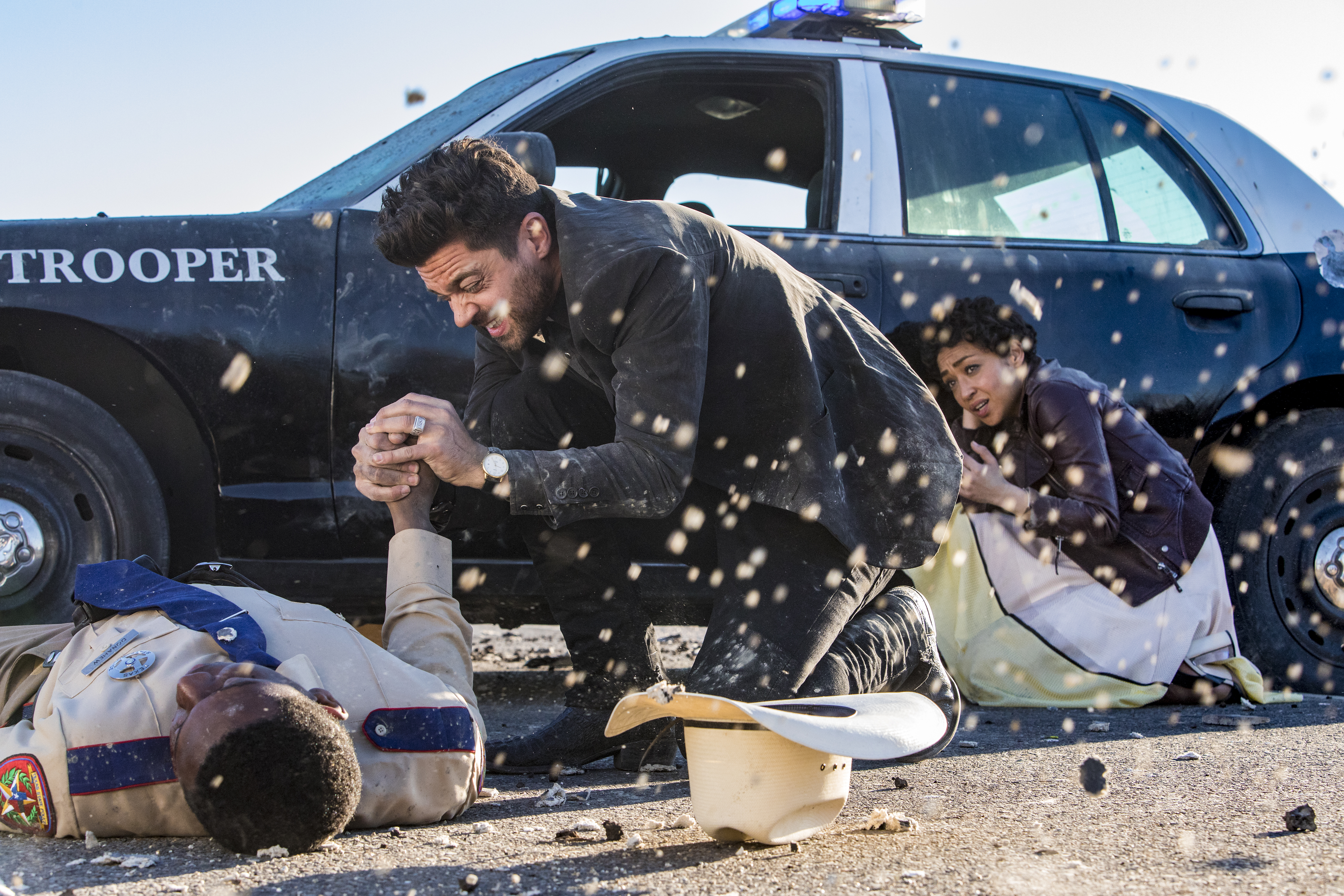 Annville is still a smoking pile of rubble when Preacher‘s second season kicks off. It’s safe to assume that “On The Road” picks up just a few hours after the season 1 finale, given that Tulip and Cassidy are wearing the same clothes from the diner when they agreed to take this road trip with Jesse. Even though this trio had nothing to do with the methane explosion that leveled a whole town, bad luck follows them just as closely as the Saint of Killers.

We begin with a lively discussion about circumcision and specialized face creams, but when the inadvertent sing-a-long starts, fans know they’re in for a treat. Cassidy’s got deep and passionate opinions about pop culture (don’t get him started on The Big Lebowski), and when the first few bars of “Come On, Eileen” by Dexys Midnight Runners begins, the audience knows they’re in for a treat.

After refusing to stop for the State Troopers, a high speed chase ensues and comes to an abrupt end when Tulip’s ’72 Chevelle runs out of gas. Aside from Cassidy’s umbrella antics (which are still funny and evolving from season 1’s giant hat and poncho), they’re all surprisingly calm for having been yanked from the vehicle by several Texas State Troopers. Once Jesse tires of following orders, he uses Genesis to their advantage. He finds much of what he says to be funny, but Tulip does not like it when he uses the power.

Her distaste of the ability is a running theme through the first episode, so much so that Jesse consults with her (almost) every time he plans to use it. The gesture shows that while Jesse may be leading the road trip, Tulip is group’s conscious (for better or worse). Preacher spent the first season playing up Tulip’s dominance in what was for the longest a one-sided relationship. However, season 2 begins with them as a couple who make collective decisions, and wow are they dysfunctional.

Viewers got a glimpse of this last season with the whole Carlos story line, but now that they have truly reconnected, they are something else entirely. Unfortunately, Cassidy is still in love with Jesse’s girl, and he’s made it clear he doesn’t like keeping secrets from his best mate. Sure, the two of them raised all kinds of hell together in Annville, but Tulip has known Jesse for decades and she alludes to a darkness that not even viewers have been able to see yet. The unrequited love may prove disastrous as the series progresses, but for now, Cass has agreed to keep his mouth shut about him and Tulip’s one-night stand.

As we make our way through Texas looking for God, Jesse brings them “an old family friend” who happens to be a religious scholar, hoping to glean some insight into their search for God. The first meeting is reminiscent of Odin Quincannon’s speech after one of the Toadvine Whorehouse girl’s was killed running from QM&P men. Tulip is enraged to find a girl locked in a covered cage in Mike’s garage, but the minister is adamant that his deprivation methods work to heal people of their addictions. At first, the encounter seems jarring and out of place, but the more the girl talks, the more it sinks in that he really is trying to help break her of a cell phone addiction. Just par for the course with Preacher, honestly.

The show really set itself apart from the rest of what’s on television and the second season is already stronger and more secure in its established identity. Many of the characters we meet in this premiere episode are throw aways, emphasizing the focus on our three main characters and the immortal killer on their trail. Minimal distractions don’t mean the story is simple, because there are two very distinct plots with the Saint of Killers after Jesse and Jesse et al. looking for God.

Before Mike’s untimely demise, he does give Jesse a lead that takes them a strip club where God was a frequent patron. There is something off about the She She’s Club when they walk in, and it has everything to do with the jazz band on stage that plays live music to accompany pole dancing routines. But don’t let the music fool you, because this is far from an upscale joint. After Jesse tries to be reasonable with the owner, Tammy, he is forced to use Genesis after she is shot (by a stray bullet thanks to Cassidy’s inability to follow rules). Her dying breath tells them that God hadn’t been at the club for the girls, he was there for the music. God left heaven to walk the Earth in search of jazz? At least he’s got good taste in music.

God is a jazz man, the Saint of Killers is unrelenting, and Tulip and Jesse are the most interesting hot mess on TV. The second part of the Preacher season 2 premiere, “Mumbai Sky Tower,” airs tomorrow, Monday, June 26th, at the new time of 9/8c on AMC.

The Blacklist “The Good Samaritan”