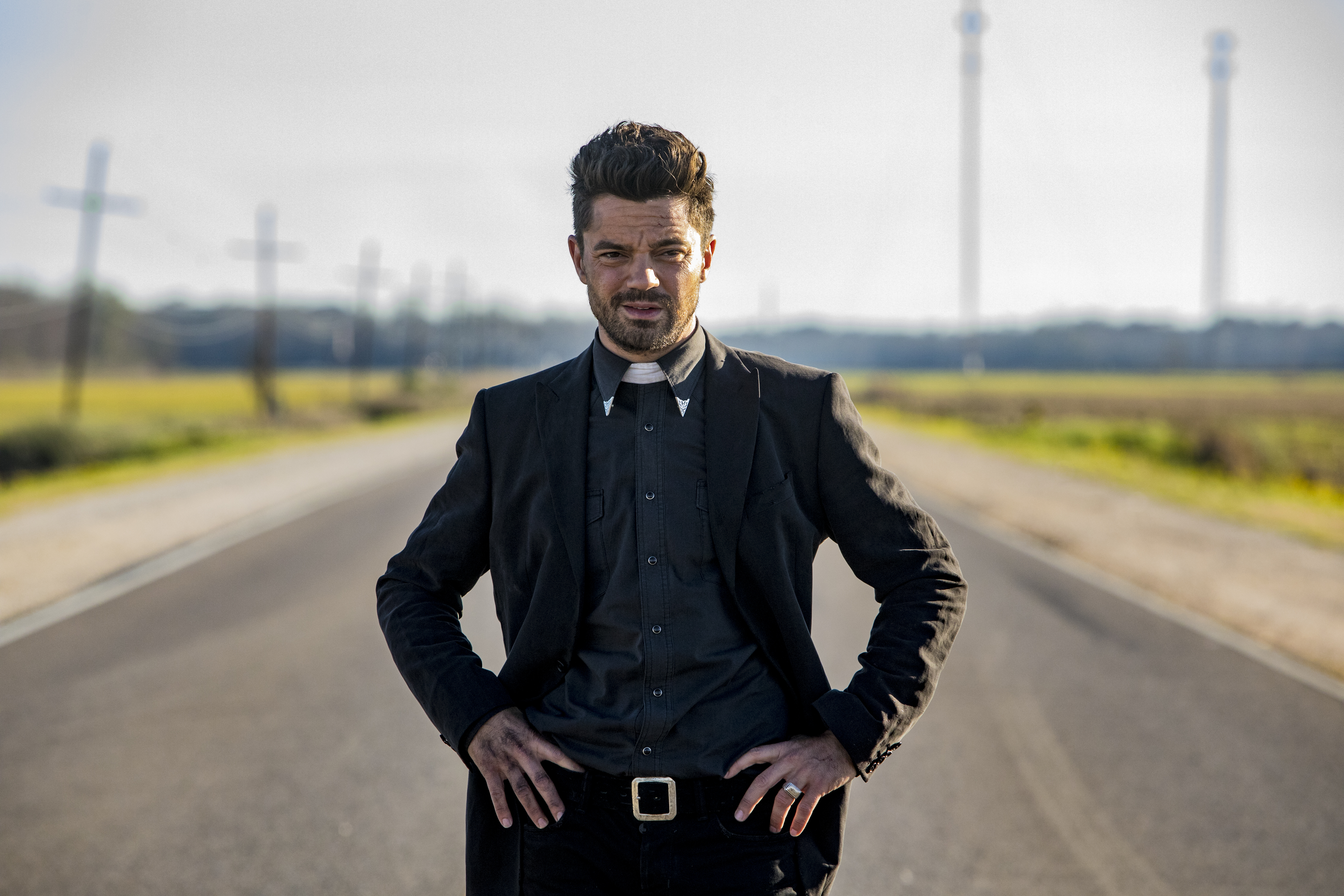 Jesse, Tulip, and Cassidy have committed to finding God no matter what obstacles they encounter along the way. The premiere begins with funny banter and a sing-a-long, but fans don’t have to wait long for sirens, explosions, and the blood and gore we’ve gotten accustomed to with Preacher.

Peppered throughout the first two episodes of the premiere, season 2 makes several attempts to make the audience believe that normalcy can be achieved. Serious conversations between Tulip and Cassidy about their past hook-up (that still has Cass smitten), Tulip and Jesse finding out their hometown has been obliterated, and even Jesse coming to terms that finding God is bigger than his selfish need to ask his questions.

With no ramp up to the action sequences, the season two premiere feels familiar like catching up with an old friend. Shenanigans, dismembered body parts, and Cassidy’s perfect comic relief make for a strong start to the second season. But it’s not all senseless violence (though there is no shortage of it) the trio meet new people along the way that are helping them stay on God’s trail, whether they want to or not.

With the Saint of Killers relentlessly hunting Jesse and Genesis, there’s a growing sense of urgency and unease as the episodes progress. Breaks in the action are short-lived, but a lot of character development is squeezed into those moments of calm. Tulip is very vocal about her dislike of Jesse using Genesis, and she’s quick to tell him so each time he uses the power. She feels his “smokey brain hand power” is not playing fair because he’s using mind control to get what he wants. Only Tulip would prefer a gun fight to Jesse talking their way out of a bad situation.

From the opening sequence to the reveals throughout their travels to find God, it’s apparent that music will play a big role in this season of Preacher. Part one of the premiere sets the stage while the second half (which airs on Monday night in the series’ new time slot) introduces new challenges and the promise of a whole new setting.

Being hunted by the unkillable Saint of Killers is bad enough, but Tulip’s past also catches up to the trio as they try to stay one step ahead of death. It’s easy to forget that not everyone got blown up in a fiery ball of methane in the season 1 finale. But not even a powerful “friend” from the past can help them outrun the Saint. “Mumbai Sky Tower” takes a heartbreaking turn when someone has a hard time reconciling their present with the past.

Yet as secrets from Tulip and Cassidy keep piling up, Jesse’s ego grows more and more determined to find God and confront him about why he abandoned humanity. It feels like things are going to get heavy very quickly in Preacher‘s second season. While New Orleans beams with the promise of answers, it will, inevitably, lead to more drama, getting sidetracked, and maybe even some secrets being brought to light.

If the series sticks closely to comics, fans could be in for vampires, voodoo priestesses, and a lot more stomach churning gore.

Preacher season 2 premieres with “On The Road,” Sunday, June 25th at 10/9c on AMC; followed by the second night of the premiere with “Mumbai Sky Tower” on Preacher‘s new night, Mondays at 9/8c on AMC.