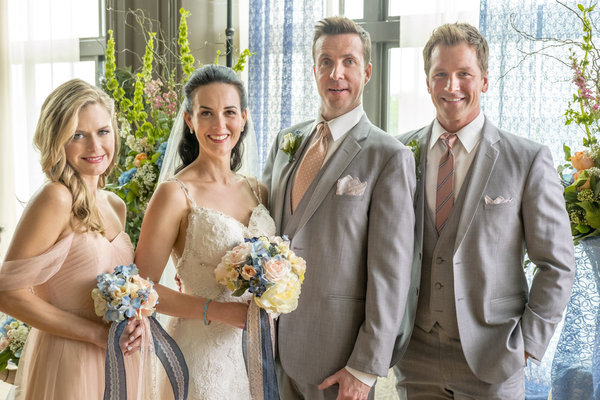 Hallmark Channel closes out its June Weddings Saturday night with My Favorite Wedding, starring network regular Paul Greene (When Calls the Heart) and Maggie Lawson (Psych) in a romance set at a destination wedding.

Lawson plays Tess, a doctor who’s the maid of honor for her BFF’s wedding, which she’s super excited about. Not as exciting is the continuing disappointment that her well-intentioned but clueless boyfriend, Dex (Reign and Cedar Cove‘s Giles Panton), keeps heaping on her. When she ends up flying solo for the wedding, her BFF (Christine Chatelain of The Man in the High Castle) pairs her with the best man, divorce attorney Michael (Greene), who’s usually on the other side of nuptials.

As they’re tasked with various errands to keep the wedding day on track and the bride sane, the duo find equal footing and a fast friendship that makes Tess realize how much she’s settled with Dex and his inability to put her first. Michael also gets bonus points for helping Tess meet a potentially VIP related to her taking the next step in her career.

It’s a fun outing that’s generally pretty happy-go-lucky as everyone lands where they’re supposed to. Lawson and Greene are fun together, and the supporting cast is rounded out with familiar Hallmark faces like Peter Benson (Aurora Teagarden), Gwynyth Walsh (Hailey Dean), Malcolm Stewart (The Art of Us), and Lisa MacFadden (Aurora Teagarden). Mel Damski (Psych and Moonlight in Vermont) directs Keith Calabrese‘s first project for Hallmark.

This is also Lawson’s first Hallmark film, and she has a great time here. I love seeing her do aÂ long-form movie when we’ve mostly seen her in episodic TV. Several years ago, she did a pair of fun films with Victor Webster for Lifetime called Killer Hair and Hostile Makeover, and I so wanted more of those, but I’ll happily take her here. Also, if you missed it, the Psych gang just wrapped a one-off Christmas movie that will air on USA later this year.

Deja Do Over and Over Again, Dark Matter "All the Time in the World"