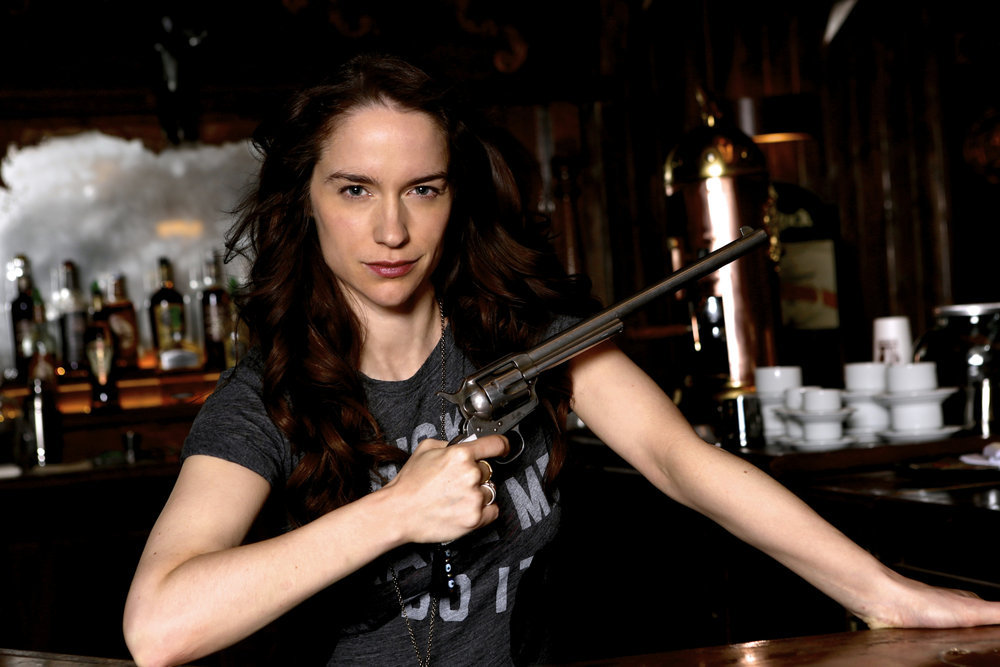 Season 2 started off fiercer than ever. I never expected anything less. I mean, in the first two minutes of “Steel Bars and Stone Walls,” Waverly, Doc and Wynonna slayed an ugly ass demon creature thing and Wynonna served up her very own Bond-esque moment complete with whip of her hair:

And then the show followed up this badassness with a never gets old slo-mo walk. I don’t care how cliche those things are, I fall for them (almost) every time.

Before I get to a preview of episode two, let’s step back and get a status update on all the characters. It’s early in the summer season and I’ve already experienced a few TV heartbreaks, one in particular on Wynonna Earp. Dolls is on the run, everyone. This fact is causing me anxiety. I’ll tell you why in just a bit. Also, things are a bit shaky for #WayHaught, Wynonna isn’t doing so well what with losing Willa and Dolls and worrying about Waverly, which is a constant in her life. Oh and Doc lost his hat. He lost his hat, people. Not cool. You see why I’m experiencing extreme nervousness and anxiety?

Wynonna: Wynonna had a lot to contend with in the season two premiere and it’s safe to say she’s not processing any of it so well. She seemed a bit frenetic, like there was something off. It’s easy to see why knowing what she’s going through.

Like I just said, she has to deal with Willa being gone and her role in her sister’s death. In “Steel Bars,” her main mission was to rescue Dolls. So, naturally, she put everything else to the side. She learned about Dolls’ inhumanness, she met one of his coworkers, Eliza (Lost Girl and Reign‘s Rachel Skarsten). First impressions were brutal as in the two battled it out while Eliza was in her underwear. Eliza won that round plus it seemed like she didn’t realize how much of a big deal Wynonna was.

Thankfully, Eliza turned out to be more ally than rival. And it turned out she knew Wynonna was a big deal from the get go. Operation Rescue Dolls was a success but with a couple asterisks. Eliza was killed and Dolls wasn’t able to return to Purgatory to fight the good fight alongside her. She did take a crushing moment to feel the loss of Willa. But, of course, she’s not going to let anyone know how bad it is for her right now.

Dolls: So I’m not lying when I tell you I need to figure out how to make peace with the fact that Dolls didn’t end up back in Purgatory. It was impossible for him to return, of course. He’s on the run and now Wynonna and the gang are working for Black Badge. So there’s no way Moody and Lucado are going to let bygones be bygones. Dolls is a fugitive. At least we got that last heartbreaking moment between Dolls and Wynonna in Purgatory. His smile (and single perfect tear) to her had goodbye written all over it. Confession: that quick moment made me burst into tears. Yes, I’m still trying to process this change in dynamic. I might need a Wynonna Earp support group to help me out.

Waverly: Wynonna’s sister touched the black goo at the end of last season. And now she’s feeling the effects. She’s got black eyes. She’s way more confident than she’s ever been before. And she’s mysterious as hell. She’s all badass helping take down that weird demon creature. She was integral in helping save Dolls (and got to use a British accent to boot). I’m not sure what’s going on with the black goo of it it all but I’m keeping my eye on her.

On top of that, we know what Bobo told her in the season one finale: that she may not be an Earp. And she made an executive decision when facing Moody and Lucado. Her girlfriend was safe in the car and when they basically blackmailed the gang into signing on to fight revenants and all other creatures that threaten Purgatory, she had a chance to include Haught in the group. Waverly said there was no one else who knew what they knew. That means Haught is officially out of the loop.

Haught: Nicole can tell something is up with Waverly. She’s already noticed her girlfriend tastes different. Oh and make no mistake. Nicole is upset she’s not part of this new mission. Waverly protected her but Haught rather fend off the “demon horrors” that Black Badge has tasked the group with eliminating. At the end of last season she was part of the gang. And now she’s right back out of it again. Poor Haught. And, to be honest, poor Waverly. Because these two are not on the same page and that sucks.

Doc Holliday: Well, Doc lost his hat. There’s that. He showed he knew more about Dolls than Wynonna did when he told her about Dolls un-human condition. He got to bring dynamite to the fight although he didn’t get to use it. Maybe some other time. Also, what did an injured Dolls whisper to Doc? Are we going to find out any time soon? And does it have to do with why he acted a bit distant with Wynonna after she basically invited him in when she was about to take a shower? He turned her down flat. Strange.

In the second episode of season two, the Wynonna/Doc relationship remains off kilter. Waverly and Nicole are on shaky ground as well. Oh and get ready for spider creatures. They are creepy crawly and the Earp ladies must stop them.

Synopsis for “Shed Your Skin”

Three Things to Look Out For:

Wynonna Earp shows and sheds some skin tonight at 10/9c on Syfy and Space Channel.