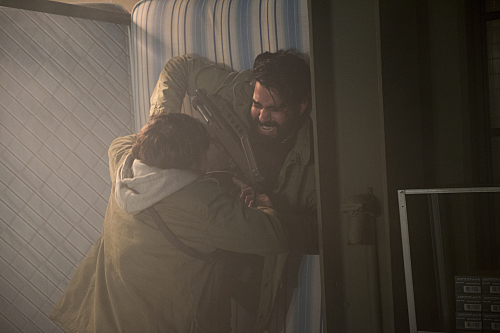 In tonight’s all-new episode of the CW’s iZombie — spoiler alert — Ravi’s okay. At the end of last week’s episode, there was a gun pointed at his head. Harley Johns and his fellow zombie haters/hunters didn’t take too kindly to the medical examiner’s defense of a strung up Don E. Little did they know that a zombie-fied Liv and Blaine were on their way. We’re sure those two were integral in engineering Ravi’s escape. Now whether Don E. was rescued we have no idea.

What we do know is that we have an exclusive clip from tonight’s “Conspiracy Weary” and it’s the reason why we spoiled Ravi’s fate for you guys. The preview features a healthy Ravi safe at home with Major. The two talk about Ravi’s “lie” that he was in London when he was really undercover with the zombie truthers. But much more of their talk is about Major and Shawna, the girl who helped him build that sex fort they dubbed Fort Lust.

Oh and another spoiler alert: this Major/Ravi conversation features a Downton Abbey reference. You’ve been warned.

SEND IN THE CAVALRY â€“ Liv (Rose McIver) and Blaine (David Anders) come to the rescue of one of their own. They consume the brains of a conspiracy theorist and paranoia ensues. Meanwhile, as they continue to search for conspiracy theories that may or may not exist, Liv researches Majorâ€™s (Robert Buckley) new friend. Finally, Ravi (Rahul Kohli) makes a surprising discovery of his own. Malcolm Goodwin and Aly Michalka also star. The episode was written by Bob Dearden and Directed by Mark Piznarski (#311). Original airdate 6/13/2017

Another reason why we’re excited for the episode: more Jason Dohring. Veronica Mars fans have to love Dohring’s presence on the show. It was inevitable right? Not only is this a reunion with his VM creator Rob Thomas. He’s been a go-to guest star on the CW circuit for a while now. His CW credits include Supernatural, Ringer, The Tomorrow People, and most recently, The Originals. This iZombie end-of-season-three stint is what we call a no-brainer. Pun intended.

iZombie “Conspiracy Weary” airs tonight at 9/8c on the CW.

Burn Notice “Damned If You Do” Preview (VIDEO)