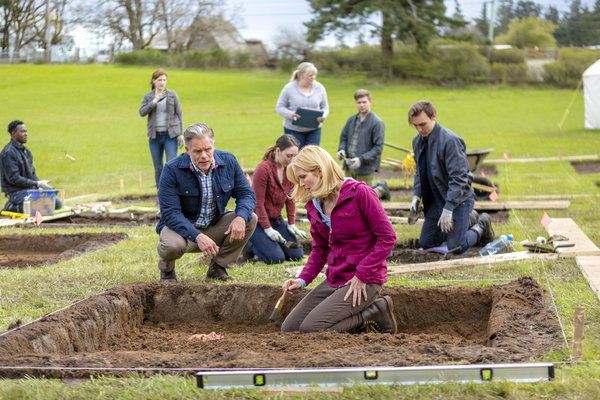 Courtney Thorne-Smith and James Tupper make their first appearance on Hallmark Movies & MysteriesÂ  alongside When Calls the Heart‘s Martin Cummins Sunday night in Site Unseen An Emma Fielding Mystery, the kickoff film in a potential new franchise for the network based on the novels by Dana Cameron.

Thorne-Smith is Emma Fielding, a second-generation archaeologist completing one of her father’s unfinished projects with a group of students when they find a (new) dead body in the mix that throws a wrench in her personal and professional lives and draws the (maybe not entirely unwelcome) attention of an FBI agent (Tupper). The plot thickens as the story evolves from a search for unearthed evidence of a 17th century coastal Maine settlement to a murder mystery with a side of art theft and smuggling thrown in.

Cummins plays Edward, the head of Emma’s department, and the cast is rounded out with Saving Hope‘s Benjamin Ayres as Will, an old classmate of Emma’s, and Adam DiMarco (The Magicians) and Tess Atkins (My Sweet Audrina) as her students. Corner Gas‘s Lorne Cardinal plays Sheriff Stannard. Doug Barr (The North Pole films) directs a script by Suzette Couture (Autumn in the Vineyard).

The film works both as a standalone and a beginning. It’s nice to see Thorne-Smith headlining here, especially when we’re used to seeing her in episodic series, and Emma is a good companion to the other capable, independent accidental sleuths on HMM. It’s good to see Tupper in a lighter role, too, especially after the nail-biting Aftermath (which was one and done for Syfy, ICYMI).

The Leftovers Series Finale "The Book of Nora"

The Leftovers Series Finale Preview: "The Book of Nora"