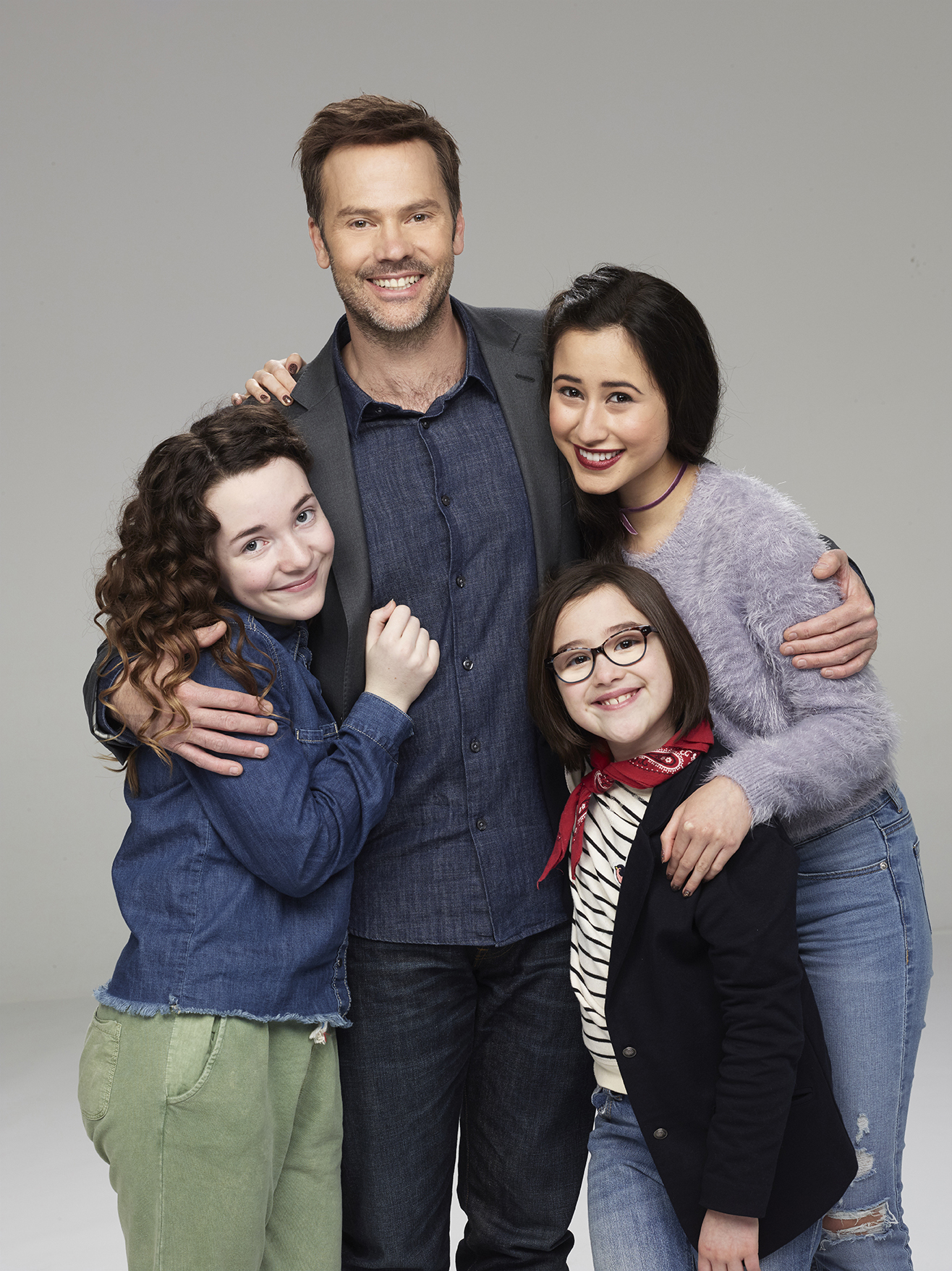 7th Heaven‘s Barry Watson returns to television in another feel-good family series. Date My DadÂ debuts on UP TV, a channel that specializes in, well, uplifting programming.

Watson’s character is a single dadÂ raising three daughters who collectively decide it’s time for their father to start dating again. Whether heÂ concurs is the issue. It’s been three years since his wife died so, naturally, he’s struggling with the concept of moving forward with his life. His first reaction to his daughters’ request is panic, accompanied by a healthy dose of denial, which is then followed up with more panic.

You see, he’s content with holding on to his past just as everyone in his universe wants him to think about his future. Actually, they want him to do more than just think about it. They’ll actively do what they can to help this process along.

Obviously, it won’t be a smooth transition back into the dating world. It also won’t be easy coming to terms with the fact he just turned — gasp — 40. Good thing he has his three daughters, his mother-in-law and his brother and sister-in-law for support. He’s going to need them.

Date My Dad, a 10-episode family dramedy, tells the story of a single dad raising three daughters. Ricky Cooper had the perfect life. A former professional baseball player, he was married to Isabella, the love of his life. Rickyâ€™s world comes crashing down when Isabella passes away leaving him to raise three daughters alone. Date My Dad picks up three years later while Ricky is raising the girls with the help of his live-in mother-in-law, Rosa.

On his 40th birthday, Ricky experiences a different type of crisis when Rosa unexpectedly announces that she is moving. He becomes panic-stricken knowing he will have to tackle everything from make-up to boys to driving…on his own.

His daughters â€“ Mirabel (15), Elisa (12) and Gigi (8) â€“ have also been busy. They have taken matters into their own hands by making it their mission to get their dad back in the game…the dating game, that is. Ricky is in for a roller coaster ride as he is pushed into the dating world for the first time in twenty years while also being the best dad he can be to his girls.

Barry WatsonÂ (Ricky Cooper). In addition to 7th Heaven, Watson has starred in What About Brian and Samantha Who? His other TVÂ credits include Masters of Sex, Hart of Dixie and Gossip Girl.

Zenia Marshall (Mirabel Cooper). The 17 year oldÂ is an accomplished dancer and once toured in her mother’s Tina Turner Tribute act. MarshallÂ appeared in the HallmarkÂ Channel TV movie Summer of Dreams alongside Debbie Gibson.

Lilah Fitzgerald (Elisa Cooper). Her small screen credits include The 100, Hellcats, Hallmark’s When Calls the Heart and playing Phoebe’s daughter, Anouk, on Bravo’s Girlfriends’ Guide to Divorce. Supernatural fans may know her as theÂ Preteen Emma in “Slice Girls.” Emma was Dean Winchester’s insta-daughter. The older version tried to kill the hunter.

Audrey Smallman (Gigi Cooper). The 11 year old wasÂ in one of Hallmark Channel’s holiday-themed movies, Family for Christmas, which starred Party of Five‘s Lacey Chabert. She also appeared in an episode of the Netflix sci-fi series, Travelers.

Raquel Welch (Rosa). She’s a Hollywood icon known for her movie career starring in classics like Fantastic Voyage,Â One Million Years B.C.Â and The Three Musketeers. On the small screen, she starred inÂ the PBS series American Family and has guest starred on everything from Seinfeld to Lois and Clark: The New Adventures of Superman to Spin City.

Lochlyn Munro (Bill Cooper). While Munro stars asÂ Ricky’s brother Bill Cooper on Date My Dad, he’s playing a Cooper on another show at the same time. On the CW’s Riverdale, he’s Hal Cooper, Alice’s husband and Betty’s dad. His many otherÂ TV credits include Lucifer, Bones, Castle, Psych, Smallville and Charmed, where he played Jack Sheridan, one of Prue’s love interests. He also pulled double duty since Jack had a twin brother named Jeff.

Karen Holness (Dr. Jackie Cooper). Jackie is Ricky’s sister-in-law. Holness has a list of Hallmark credits on her resume likeÂ Murder She Baked: Just Desserts, Signed, Sealed, Delivered: Higher Ground, A Rose for Christmas, and Every Christmas has a Story. She’s also guest starred on Lucifer, Arrow and Saving Hope.

Cindy Busby (Stephanie). Busby plays Stephanie, one of Ricky’s employees at the health club he owns. Busby’s also a well known actress in the Hallmark universe of movies and TV series. Her credits include: Cedar Cove, a couple of Hailey Dean mystery flicksÂ and Unleashing Mr. Darcy. Plus, she’s appeared onÂ Supernatural, The Secret Circle, The L.A. Complex and The Vampire Diaries.

Guest starring during this first season of Date My Dad are Willie Aames, Robert Wagner, and Natasha Gregson Wagner.

Date My Dad premieres tonight on UP TV with back-to-back episodes starting at 9/8c.

The Leftovers Series Finale Preview: "The Book of Nora"