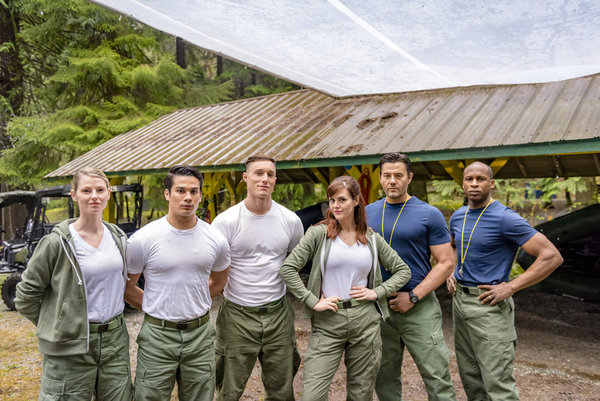 Sara Rue makes her Hallmark Channel debut Saturday night opposite Garage Sale Mystery‘s Steve Bacic in All for Love, a romance that revisits the rom-com/military theme.

Rue plays Jo Parker, a writer who’s built a successful career penning romance novels while maintaining impartial observer status in her personal life. After two less-than-terrific book launches,Â including one that wasÂ called out for factual inaccuracies, her publisher, Diana (Cedar Cove‘s Teryl Rothery) decides to take drastic measures on Jo’s latest project–a romance with a Navy SEAL tangent–by assigning her retired SEAL brother Colin (Bacic) to literally whip Jo into shape and ensure that she gets it right.

This follows on the heels of the standard meet cute/spill a drink on a each other and then goes (sort of) downhill from there, until theyÂ realize that maybe they’ve both become so expert at avoidance that they actually have something in common beyond the book. Jo’s BFF Molly (Jordana Largy from Finding Father Christmas and Death al Dente) also pushes her to face the reality that she’s pouring everything into her books at the expense of living an actual life.

Thankfully,Â Jo and ColinÂ finally recognize that they’re the only thing standing in their way. It’s an enjoyable two hours that meshes some of the same territory of For Love & Honor and A Novel Romance, although you may yell at your TV that a passport is never mentioned at a key point in the film, but that’s a teensy nit.

It’s nice to see Rue, who tends more toward series work on shows like Mom, Impastor, and Bones, to switch it up and do a one-off, and she and Bacic have a good time here. I hope she continues to work for the network now. I still adore This Time Around, a film she and her Popular pal Carly Pope did for ABC Family (what is now Freeform) way back there.

I always enjoy Bacic, and it’s fun toÂ have him do a romantic lead, which he doesn’t get to play often–you can still find him in MOWs as the guy you shouldn’t trust (last weekend on Lifetime, for example, in Seduced by a Stranger, whichÂ repeats Saturday night at 2:05 am/1:05 c). I’m glad to see him get a shot at doing films for Hallmark outside of his role on GSM. He has a really lovely scene with Rothery that makes me want to see them work together again, too.

The cast is rounded out with When We Rise‘s Alika Autran, Drew Tanner (Like Cats & Dogs and the upcoming ABC summer drama Somewhere Between), The Arrangement‘s Reese Alexander, and newcomer Gabe Grzybowski as Jo’s boot camp team.

Lee Friedlander (Sleigh Bells Ring on Hallmark and several Lifetime projects) directs a script she co-wrote with Tracy Andreen (Tulips in Spring and Lifetime’s Spirit of Christmas, which is on Netflix) and newcomer writers (switching gears from acting) Mark Famigetti and (casting director) Michael Testa.

All for Love premieres Saturday at 9/8c on Hallmark Channel. Here’s a sneak peek.

Motive Season Two Finale Preview: “For You I Die” [PHOTOS]