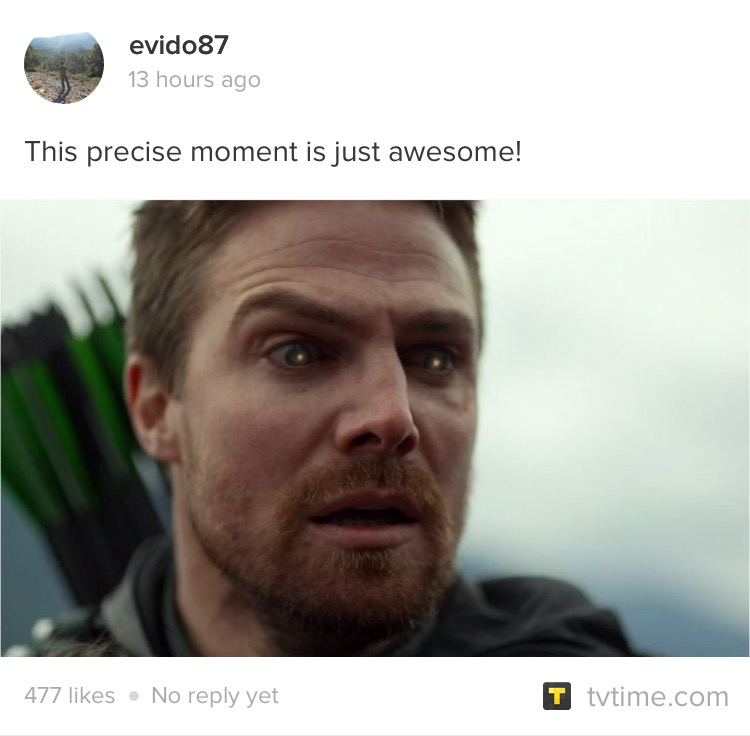 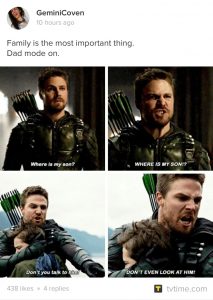 WARNING: Major spoilers for Supergirl, The Flash and Arrow finales

The social video clipping and sharing app formerly known as Whip Clip has relaunched and changed its name to TV Time. It’s now positioning itself as a place where fans can go to share their passion for TV shows using things like memes, GIFs and 15-secondÂ video reactions to what they see play out on the small screen.

For example, earlier this week, the CW’s Supergirl rolled out its season two finale where Kara defeated Mon-El’s villainous mom, Rhea. But as a harsh consequence, she lost her boyfriend when he was forced to leave the earth due to the planet becoming uninhabitable for Daxamites. Also, Alex proposed to Maggie. We have no idea what Maggie said in response. We do know how fans responded however.

Shortly after the finale aired, TV Time released stats regarding the app’s fandom reaction to “Nevertheless, She Persisted”: 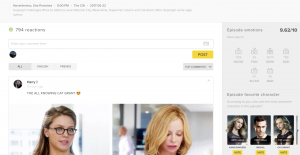 Over on the CW’s The Flash, HR made the ultimate sacrifice in that show’s season ender. Feeling guilty for unwittingly revealing Iris’ location to Savitar, he used the transmogrifier, which allowed him to take Iris’ place so he was the one that Savitar killed. Not Iris. And at the very end of the finale, the speedster-less Speed Force needed someone to take Jay Garrick’s place. Or else the world would be destroyed. Barry Allen took it upon himself to enter the Speed Force leaving his fiancee as well as his friends and family behind. He saw this controversial move as his punishment or way to achieve redemption for Flashpoint. Little did Barry know, he also made the summer hiatus supremely painful for all Flash fans everywhere. 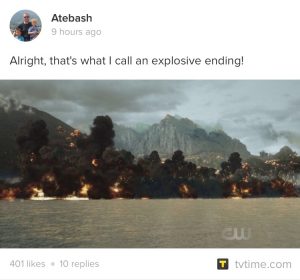 And finally, the fifth seasonÂ for the CW’s Arrow finished strong. TheÂ finale featured a tonÂ of action as Oliver returned to purgatory a.k.a. the island known as Lian Yu. He enlisted Malcolm Merlyn, Nyssa al Ghul and Slade Wilson to help rescue his team/family from Adrian Chase’s clutches. The explosive ending came when Chase, Oliver and Oliver’s son, William, were safe off the island and on a boat. Chase killed himself knowing that his death would set off explosions all over Lian Yu. So basically we don’t know the fate of Oliver’s team which includes Thea, Felicity, Diggle, Curtis and Black Canary. We also don’t know the fate of the mother of his child. Once again, this makes for a hellish hiatus not just for Oliver Queen but for the very vocal Arrow fandom.

According to TV Time, itsÂ new mission is to allow “fans to interact in a spoiler-free environment, get exclusive content and connect directly with stars from their favorite shows like Lori Petty from Orange is the New Black and Alexander Ludwig from Vikings.”

TV Time is available for free on theÂ App StoreÂ and theÂ Playstore.

Dancing with the Stars "Season 24 The Finals"

The Big Bang Theory: 10 Reasons I’m Thankful For This Show