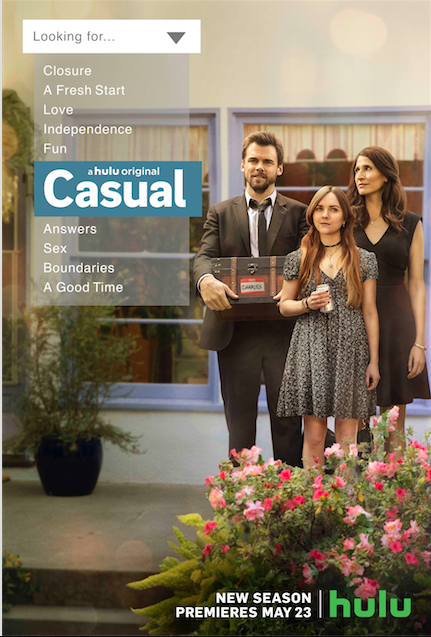 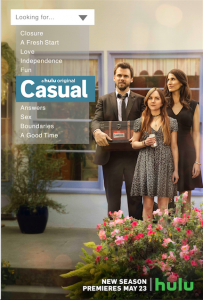 The third season of Hulu’s Casual drops today. This means another round of siblings Valerie and Alex trying to figure out life, their purpose in this world, their dysfunctional relationship and how not to make too much of a mess of things. A mess sometimes can’t be helped, however.

At the start of Casual‘s new season,Â Alex has custody of his father’s ashes (he and Valerie helped him die at the end of season two) and Valerie and Laura have moved into their new place.

The surprising consequences following Charlesâ€™ death and Valerieâ€™s decision to move out propel the trio to rebel, exploring different jobs, partners, and unfulfilled passions. As they adjust to a new normal, can they maintain boundaries or will they revert to the comfort of codependency?

How does the show top sleeping with your brother’s girlfriend? Or hooking up with your ex-husband and then making the decision not to reunite your family?

Well, in the premiere there’s one doozy of a revelation that massively affects Valerie with the added benefit of rocking Alex to his core. Although, since this is Alex, he tries his damnedest not to convey the fact this bit of information is as destructive to his life as it is.Â Trust us when we say this secret that’s outed by the mother they despise will cause the sibling relationship to go all twisty once again and each of themÂ will struggle in their own unique ways.

Meanwhile, Laura’s on a mission to earnÂ some money. Well, if it were up to her, she wouldn’t have to resort to getting a job to make said money. As for Leon, it’s not totally clear what he’s going to be up to this season. But from watching the first three episodes his presence does seem toÂ shake up the brother/sisterÂ dynamic a little.

This season look for guest stars in the form of newbies to the Casual scene Judy Greer, Jamie Chung and Gossip Girl‘s Chace Crawford. As for returning guest stars, they include Happy Endings‘ Eliza Coupe and Revolution‘s Zak Orth.

For the record: we love any show that throws the spotlight on codependent siblings. Supernatural, anyone? Watch Casual on Hulu, it’s one of our favorite comedies.Â The first three episodes of season three were released as a bundle today, with individual installmentsÂ rolling out weekly, on Tuesdays.

Fargo Preview: "The Lord of No Mercy"