Dancing with the Stars “Season 24 Week 8” 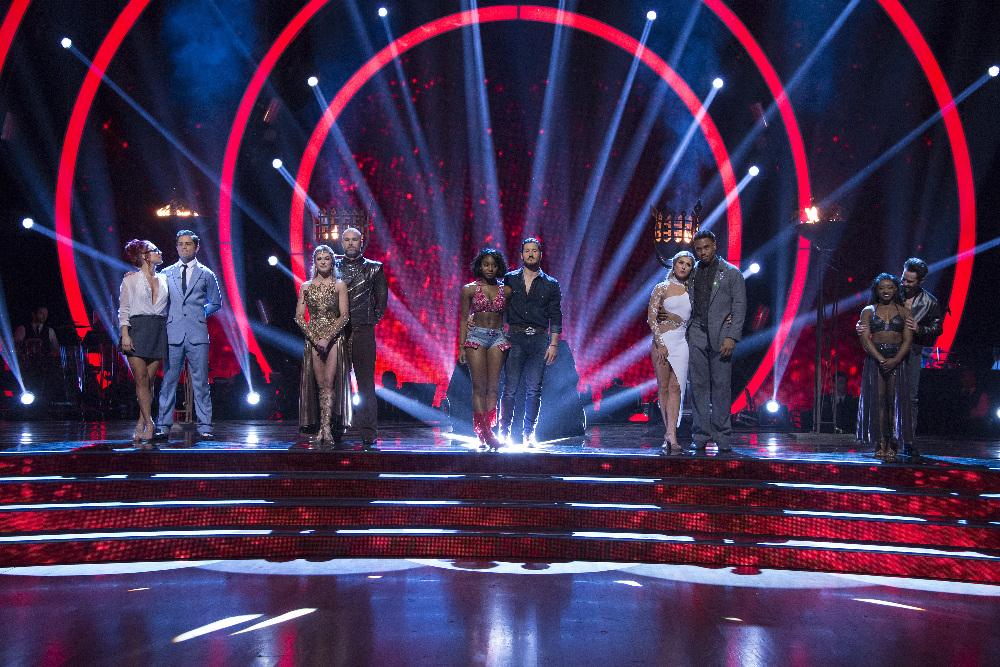 Itâ€™s two full dances this week on ABCâ€™s Dancing with the Stars plus Julianne Hough returned to the judgesâ€™ table.

The pros picked the first style of dance to reflect their partners. Meanwhile, for the second performance, the judges selected the pros that would round out the trio dance. At the end of the show one couple was sent packing, narrowly missing next weekâ€™s Semifinals.

Did the celebs turn it up? Letâ€™s take a look and see how everyone did.

Emma talked about how Rashad is inspiring to everyone. This jive was a fun dance to kick off the evening. And while once again he has the moves, he needs to work on his feet a bit. Otherwise he should make it to the finals. One thing though. At the end of the routine, Rashad pulled off a Derek Hough move. (A jump over the partner and then catching Emma by the head.) Classic.

Val as proud of Normani for all she has experienced and so he chose a song called Freedom. She discussed how she had been bullied on social media. The dance was a beautiful story and expression of art. Normani was memorizing. She was great from the beginning but now she is sensational. The judges agree giving her perfect tens.

I have to say I was not really excited about this dance. Bonner comes across very mechanical. Even his connection with Sharna was off. He got annoyed with Sharna during rehearsals, which really turned me off. Bonner was extremely disappointing this week and the judgesâ€™ scores reflected this disappointment.

Simone is just adorable. Her steps and skills are perfect. The performance could have been extraordinary, but I think she still needs to open up. But she is flawless when it is just on the technical. This is why she is such a great gymnast.

It was a beautiful dance but David seemed a little stiff. The former Chicago Cubs catcher seems like a really great guy and someone to root for, which is why heâ€™s still in this competition. This waltz with Lindsay was probably his best dance of the season and he got very emotional. This guy really represents Major League Baseball.

This Argentine Tango was a pretty sexy and well-executed dance. There was passion. However, Lenâ€™s having a hard time with Rashadâ€™s feet. I think he is being a little too critical. It was hot and on point. Rashad was so close to receiving all tens if it werenâ€™t for Len. But 39 is a great score regardless.

This was a (nearly) perfect dance. Normani has been great from day one, but she is even better eight weeks in. I would be surprised if she didnâ€™t move on to the finals.

I found this dance to be so awkward with Bonner. He got the steps but it wasnâ€™t smooth or polished. I think his attitude wasnâ€™t great either. This just wasnâ€™t his night.

This is a risk that Sasha took because he brought in a pro female dancer. I think that it paid off. I also think that the judges are really hard on Simone. She wasnâ€™t happy with the judges went they told her that she is too perfect. I think she is showing us who she is and the judges need to give her a break.

I really like David but I found this Paso Doble over the top. His technique was a bit of static and rough. David put everything into it and enjoyed himself. Isnâ€™t that all that matters?

Whoâ€™s going to the Semifinals? Weâ€™re about to find out. The First couple safe: Normani & Val. Simone & Sasha were also told they were going through to the next round. Same with David & Lindsay. That means Rashad & Emma and Bonner & Sharna were in jeopardy.

The couple that would be leaving and not moving onto the Semifinals: Bonner & Sharna. Rashad & Emma were safe. I think we can all agree that that was the right decision.

Tom: â€œIt looks like Witney has been in the blue popsicles again.â€
Tom: â€œHavenâ€™t you missed that Julianne for the last two weeks?â€
Tom: â€œAnd by the way, thatâ€™s his pep talk.â€
Tom: â€œSometimes itâ€™s good to be the pole.â€
Tom: â€œIâ€™m going to do the toss up here just to annoy Len!â€
Sharna: â€œThat is a lawsuit waiting to happen.â€
Julianne: â€œI feel like we were watching the security camera footage.â€
Simone: â€œSmiling doesnâ€™t win you gold medals.â€

Next week itâ€™s the Semifinals! Are your favorites in? Remember donâ€™t forget to vote! See you next week.

Dancing with the Stars airs Mondays at 8/7c on ABC..

Binge This: Amazon's I Love Dick

The Devil We Know: Lucifer’s Resurrection on Netflix and What Went Right

Once Upon a Time “A Tale of Two Sisters”