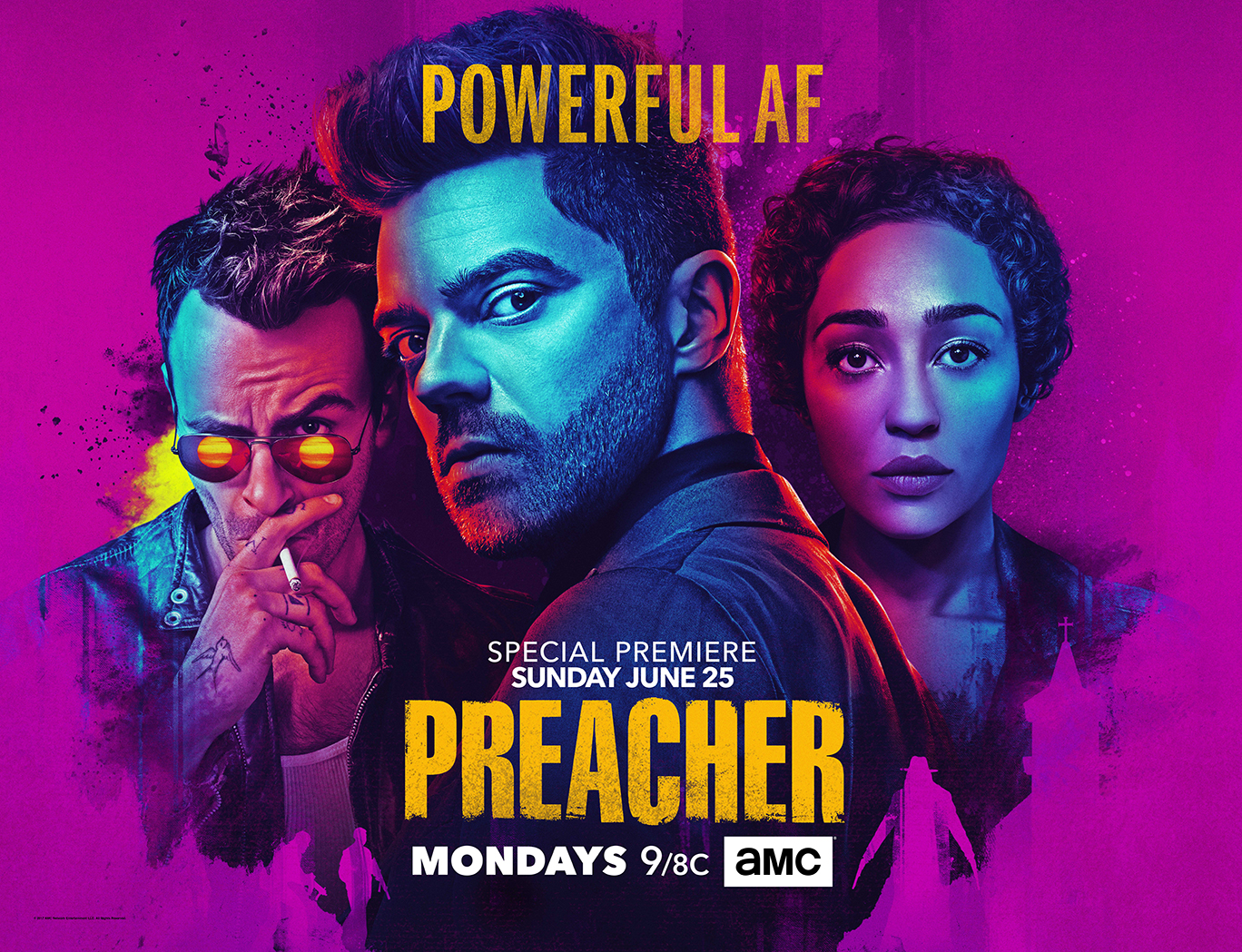 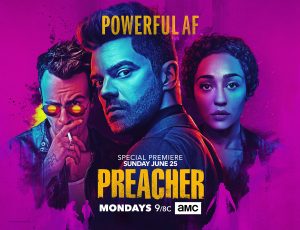 After an explosive first season,Â Preacher‘s dynamic trio of Jesse (Dominic Cooper), Tulip (Ruth Negga), and Cassidy (Joseph Gilgun) will soon be returning to AMC for more sacrilegious good times. Now that the Saint of Killers (Graham McTavish) has been released on Earth and Annville, TX has been decimated, all new adventures await as Jesse and his crew set out in search of God.

The two-night premiere begins Sunday, June 25th, at 10/9c and continues on Monday, June 26th, where Preacher finds its new home in the 9/8c time slot. The new character posters released by AMC are wildly colorful and give the three main characters new taglines. Jesse is “Powerful AF,” Tulip is an “Ass Kicker,” and Cassidy is, literally, a “Blood Sucker.” Here’s the official season 2 synopsis:

Based on the popular cult comic book franchise of the same name, â€œPreacherâ€ is an absurdly twisted and action packed thrill ride. When Jesse Custer, a small-town preacher with a criminal past, realizes God is absent from Heaven, Jesse sets out to find Him. Along for the ride are Tulip, Jesseâ€™s volatile true love, and Cassidy, a 119 year old Irish vampire and Jesseâ€™s best mate.Â Â  The gang ends up in New Orleans, where they must dodge local gangsters, dangerous secret agents in white suits, and the Saint of Killers, an unstoppable killer cowboy from Hell.

With just about all of season 1’s cast blown to smithereens, fans will get a lot of new faces for season 2. Not much is known about exactly who will be popping up, but they are bound to be some interesting characters. Noah Taylor (Peaky Blinders, Game of Thrones), Pip Torrens (Star Wars: The Force Awakens, My Week with Marilyn), Julie Ann Emery (Better Call Saul, Fargo), Malcolm Barrett (Dear White People), Justin Prentice (13 Reasons Why) and Ronald Guttman (Mozart in the Jungle, Mad Men) are all new additions to this over-the-top world.

Will we meet characters from Jesse’s past like like Lorie and Billy Bob Bobbs — the deformed swamp twins? Or perhaps some of Jesse’s relatives like his mother or uncle who is head of the shadowy Grail organization? The synopsis mentions gangsters, so it’s possible we could meet Frankie Toscani, one of Herr Star’s henchmen. If the teaser is any indication, there will be more shenanigans, more guns blazing, some old faces, and that same off-kilter humor that fans of the series enjoy.

Preacher season 2 returns Sunday, June 25th at 10/9c, with the second episode airing in its new timeslot on Monday, June 26th at 9/8c.

Lucifer Gets in Touch with His Feelings in "Deceptive Little Parasite"