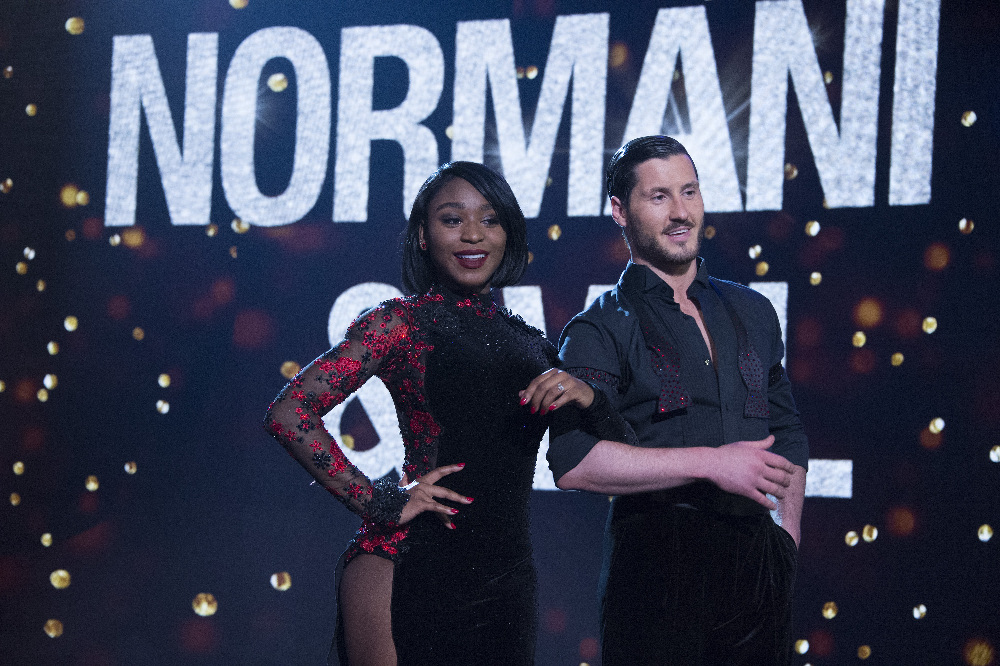 DANCING WITH THE STARS - "Episode 2407" - The seven remaining couples are presented with an all-new challenge, as they dance to celebrate "A Night at the Movies." One couple will receive immunity; the remaining couples will compete in a Dance-Off; and a double elimination will take place at the end of the night, on "Dancing with the Stars," live, MONDAY, MAY 1 (8:00-10:01 p.m. EDT), on The ABC Television Network. (ABC/Eric McCandless) NORMANI KORDEI, VALENTIN CHMERKOVSKIY

Last night on ABCâ€™s Dancing with the Stars, it was a night at the movies and that called for a big opening dance number like the old musicals.

The Big News: a dreaded double elimination loomed overÂ this evening of dance. Whichever couple received the top score after the first round earnedÂ immunity and automatically moved on to next week, however. The rest of the pairs facedÂ the pressure of a dance-off before finding out who was going home.

This Paso Doble was well done. There were moments that Bonner wasnâ€™t strong enough but he has improved every week. Also there could have been more Paso Doble content. The cool thing was for a man that was paralyzed 18 months ago, jumped on a table with no help!

This was a solid dance by Nancy and Artem. For the first time this season, she seemed more relaxed. We have seen Nancy stress herself a lot and she just had fun.

I thought this was such a cute dance. Simone and Sasha are perfectly matched. They both can do gymnastics and fun tricks. At the same time, they have the content and technique down. One thing Simone needs to do is look at Sasha in the eyes and connect even more with him.

Nick had some missteps but he and Peta were connected. He did sell it. His improvement in his technique is clear and he puts his all into everything.

I want to say this was an excellent dance but there was something missing. Carrie Ann said for him to watch his posture. The story was excellent but there was a bit of a miss for me and Iâ€™m in agreement with Carrie Ann. The difference was probably his stance. It was too much of a distraction from the Paso Doble.

It looked like David had a blast. He had some moves but some of the salsa was a little awkward. I think Mandy has some great suggestions for David. He needs to find the power that he has when he is throwing a baseball. It was fun. He did hit every movement.

Even after being injured during the week, you would have never known by the way Normani danced. This Argentine Tango was perfection. It was sensual, sexy and had a lot of content. I agreed with Len, this was the best dance of the night. The perfect score was the only way to go.

Since Normani and Val earned the highest score in the first round they did not have to compete in the dance-off.

There were three dances the couples had to prepare: Cha Cha, Rumba and Jive. America would also be one of the judges. The winner from each dance-off would get two extra points.

Here’s how each dance-off played out.

We already knew Normani & Val were safe because of immunity.

The next couple safe: Simone and Sasha. Then Bonner and Sharna were told they were coming back next week, leaving David and Lindsay, Nancy and Artem, and Nick and Peta all in jeopardy. From this trio, the couple that was safe: David and Lindsay.

That meant Nancy Kerrigan and former Bachelor Nick Viall were eliminated. I honestly thought David would be one of the celebs going home but those Cubs fans are keeping him in this competition.

Tom: â€œKudos to the crew that set up an entire saloon in under 90 seconds and no doubt will be shutting one down later tonight.â€
Tom: â€œI just crept out 700 people.â€
Tom: â€œNancyâ€™s right, every week I get to transform into a guy in a dark suit.â€
Tom: â€œYouâ€™ll get yours.â€
Erin: â€œThat could get weird out there.â€
Carrie Ann: â€œGrumpy! He called me wicked!â€
Tom: â€œA lot of pelvis fans in this crowd.â€

Next week there will be two full dances, including a new spin on the Triple dance. Canâ€™t imagine what that means! Donâ€™t forget to vote! See you on Monday.

Fargo Preview: "The Law of Non-Contradiction"

Lucifer's Back In Town and It's Sweet As "Candy Morningstar"

The Following Conversation: A Brutal Truth Leads to Release in “Forgive”