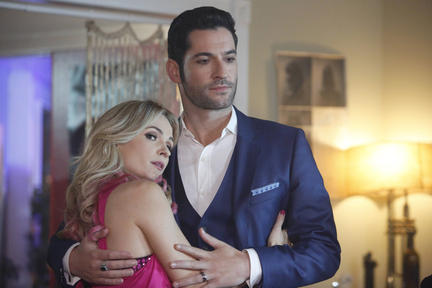 When last we saw our favourite fallen angel, he had literally gone to Hell and back (with some help from Mama Charlotte) to save Chloe’s life… then promptly skipped town altogether. Finding out his Almighty Father had planted Chloe in his path (with a little help from brother Amenadiel) had apparently sent him running off for some Lucy Time. During that time away, we see that he purchases something very expensive and very shady in a briefcase very reminiscent of Pulp Fiction.

It may have been three long months waiting for us but it was only two long weeks for all the folks in Lucifer-land. The return episode opens with Charlotte venting at a hot-to-trot Lux customer who is eventually weirded out enough by her mother-son talk to disengage and leave. Maze wanders by to rub in the fact that Lucifer is out there hating his mother just as much as his dad.

Detectives Decker and Espinoza are on the scene of a recent murder (with a weirdly prominent CW Supergirl billboard directly above), discussing Lucifer’s continued absence. Chloe doesn’t want to obsess about it anymore although Ella continues to bemoan the lack of Lucifer hugs in her life while examining the victim, the lead guitar player for up-and-coming band, Heavy Woolies.

Back at the station, Lucifer makes his grand re-appearance. Chloe’s reactions quickly spiral from relief, through anger, and smack into disbelief when he is joined by a bubbly blonde coated in pink glitter introduced as Mrs. Candy Morningstar (Lindsey Gort, Impastor).

From the moment Lucifer reappears, the murder plotline of the episode feels extremely secondary. Sure, it’s kinda funny to watch Chloe bond with the victim’s ex-wife (Felisha Tyrell, Teen Wolf) over the shared experience of being the responsible half of a partnership. And I’ll never complain about getting to see Jonathan Togo (C.S.I. Miami) back on my screen, even if he is just playing a band-loving, mediation lawyer Candy nicknames “Mannequin Hair”.

But really, whether it was the drummer, the bassist, or the ex-wife who offed the guitarist, the case was trivial to the episode and only a carrier mechanism for the core dynamics at play.

The spotlight is really focused on Lucifer and Chloe. Specifically on how Lucifer can completely decimate her blossoming affection for him while getting her to allow him back into her life as a friend and partner. It takes an irate Brother Amenadiel confronting him about his callous treatment of Chloe’s feelings to reveal the tender-hearted Devil’s goal: hurt her enough to knock her off the pre-destined love she feels for him, thus freeing her from God’s plan, whatever that is.

Meanwhile, Candy is a bubbly bit of entertainment. Her frothy exterior slips a few times, revealing something far more astute than first appearances would suggest. She spots the mediation lawyer in the crime scene photographs. She even offers some rather spot-on advice during Lucifer’s therapy session.

Mama Charlotte identifies her as possibly “the most formidable opponent” she has ever faced (much to Amenadiel’s thinly veiled amusement) and Candy is the only person really able to make Chloe think about how Lucifer might be dealing with the aftermath of the whole Hell thing.

Candy is eye-catching if nothing else and Maze can’t help but admire the view (which is an adorable scene in and of itself). So finding out that Mrs. Morningstar is as fake as her “expandable” assets is a little disappointing but does satisfy the itchy suspicion that Lucy is back in control of some aspects of this game.

Getting Mama Charlotte to reveal her plan for retaking the Silver City (aka Heaven) using Azrael’s blade is sweet but not NEARLY as amazing as Lucifer rocking out the Bangles’ “Eternal Flame” on stage to win his way back into Chloe’s good graces (and nab the Heavy Woolies’ bassist out of the crowd to boot).

All in all, the show’s returned in fine form with some real showstopper moments. And thank Lucifer’s Dad for that.

Once Upon a Time “The Brothers Jones”