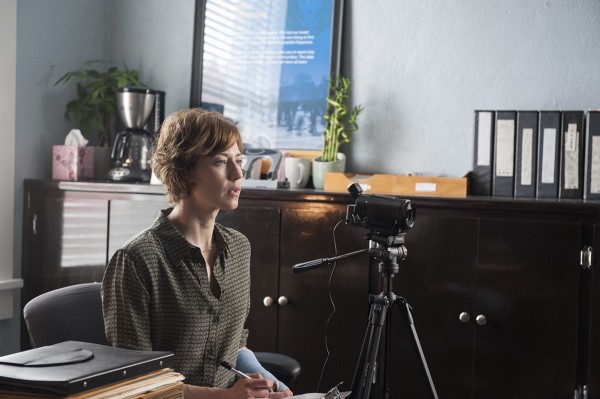 WARNING: Slight spoilers for The Leftovers

Some of The Leftovers‘ most acclaimed episodes are the ones that focus solely on one character. And although itâ€™s not as singular as previous iterations, in episode two of season three, â€œDonâ€™t Be Ridiculous,â€ weâ€™re going to be served up a full hour of Nora Durst as the star of the show.

In this episode, Nora, a fraud investigator with the Department of Departures, is off to St. Louis to look into a scam convincing people that they can see their departed loved ones again.

Nora puts on a brave face, but we know from her previous actions that sheâ€™s not immune to someone preying on her grief. Frankly, she might be the showâ€™s most damaged character, not to mention one of the most important, considering that much of the first season weighed on her ability to be â€œOK.â€ What weâ€™ll have to wait and see is if Nora ends up falling victim to the very scam sheâ€™s investigating. After all, in season oneâ€™s â€œGuest,â€ she did buy into Wayneâ€™s ability to hug the pain away.

It also seems like some of our favorite characters (and some not-so-favorite ones) who werenâ€™t in the season premiere will be making appearances in this episode, so keep your eyes peeled for some familiar faces.

Thereâ€™s also a growing suggestion of a dramatic setting change coming to The Leftovers. Itâ€™s no question Australia is going to be playing a major role in the final episodes of this series. And given our peek at Noraâ€™s future as a woman who goes by Sarah and tends to carrier pigeons in the Australian countryside, thereâ€™s a whole lot that needs to be explained this season, and it very well might begin with â€œDonâ€™t Be Ridiculous.â€

The final season of The Leftovers airs Sunday nights at 9/8c on HBO.