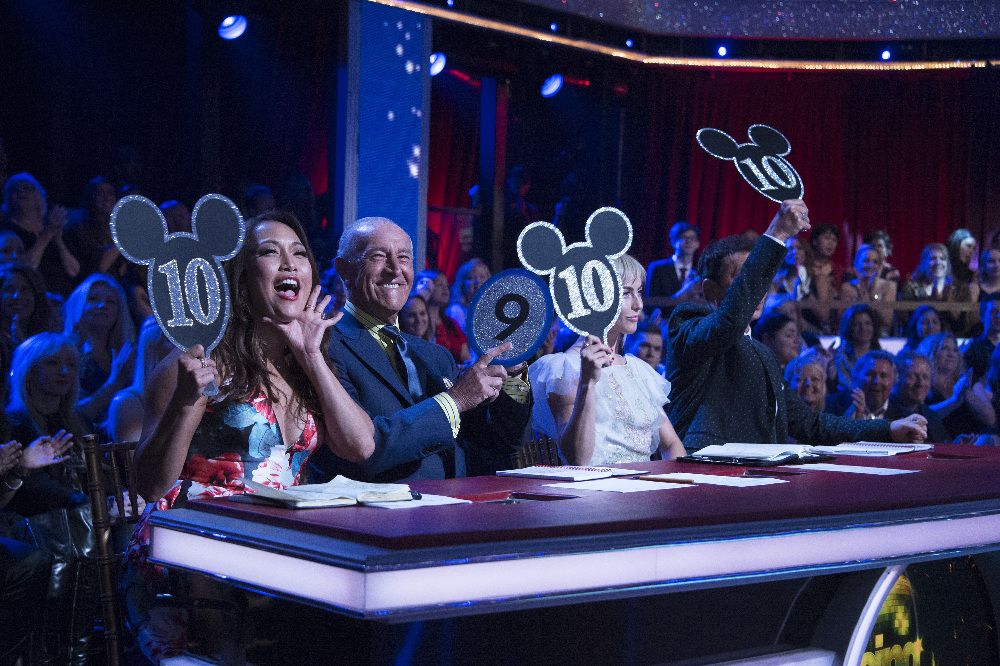 It’s Disney Night on Dancing with the Stars. ABC knows how to make crossover and branding work but can the pros and celebs make this synergy sing? I’m not going to lie. This could be uber cheesy or the best thing ever. Nothing in between. How did the dancers do?

Letâ€™s take a look and see:

There was elegance and class. The song wasnâ€™t the best to dance to but they did a solid job. I agree with Len that Rashad needs to work on his footwork. I donâ€™t think it was his best dance but he sold it. Even though this couple didnâ€™t do as well as last week, Erin Andrews informed them they were safe after receiving their scores.

I think this dance was very cute and clever. This showed a range and vulnerability to Nick that we havenâ€™t seen, including the fact he shaved off his beard. Their jazz number was fun and goofy (get it, goofy!). I’ve said this before but Peta is a great choreographer and knows how to work with her partners and get the best out of them.

Erika JayneÂ definitely showed a side of her that no one has seen. Her waltz with GlebÂ flowed and had great musicality. She left it on the dance floor and redeemed herself from last week’sÂ disappointing performance.

Iâ€™ll say it again: Heather looks like a professional. She embodied the character and got into it. Carrie Ann was underwhelmed because she expected more from Heather. I feel like she is being judged harsher then some of the other contestants because of her background. Oh and good news is that Maks is ready to dance again! Alan did a great job filling in and hopefully he will get to be a pro next season.

I think this was Bonnerâ€™s best dance. He maintained his frame and for someone that was in a horrible accident certain movements are difficult for him. You have to admire how hard he is working. He needs to work on not being as stiff in his movements and connecting to the characters, but over all he is getting better.

After the commercial break more results were shared with the teams. Of course Simone & Sasha were safe. I guess having everyone watch them dance at Wrigley Field last week helped David and Lindsay stay in for at least another week. The big shocker: Normani & Val were told they were in jeopardy. Nancy and Artem were safe from another elimination.

This was one of my favorite dances. And the fact that Donny Osmond, Season 9 champ sang the song was a nice change of pace, was a great-added bonus. Normani and Val’s dance was powerful, passionate and challenging. The content was difficult but she performed it seamlessly.

I think that this was Davidâ€™s best dance. He had fun and you just have to love him. He hit all the steps, and kept up with the pro dancers. Len and Julianne thought that his feet were a little flat, which earned the judges some boos. But these are the things he has to work on. I donâ€™t think he should have gotten any 7s. I thought he could have gotten 8 and 9s.

During rehearsals Nancy struggled since she was out of her comfort zone. I think because she is an Olympic medalist, she has spent all of her life training to be the best. She is her harshest critic and that needs to stop. Because when Nancy got on the dance Â floor she did it with a lot of joy and excellence. I think because she’s a skater it helps her form and technique.

This was an outstanding dance. The flip things that Simone can do are not human. The dance was full of content and Sasha did a great job with the choreography. This tiny person has so much power and can jump higher than anyone. Simone is also hard on herself but Sasha’s a great partner for her and she can really do anything.

The couple leaving the dance floor:Â Erika and Gleb. Iâ€™m a little sad because Erikaâ€™s awesome but someone had to leave.

Tom: â€œI appreciate that on Disney, they look at each other and say do we still boo on Disney night?â€
Maks â€œI am the captain of this ship.â€
Len: â€œNever touch me.â€
Tom: â€œWhen you said 3D, I got some 3D spittle. Thank you so much.â€
Len: â€œDonâ€™t start booing over there.â€
Erin: â€œYouâ€™re Nancy Kerrigan, you know that right?â€

Next week is Battle Boy Bands vs. Girl Groups with team dances. Itâ€™s the halfway point of the competition. Who will be the next couple to leave the ballroom? We shall see. Donâ€™t forget to vote! See you on Monday.

Dancing with the StarsÂ airs Monday nights at 8/7c on ABC.

Rewind and Repeat Moment: Reese tells Carter She Changed Him, Person of Interest “The Crossing”