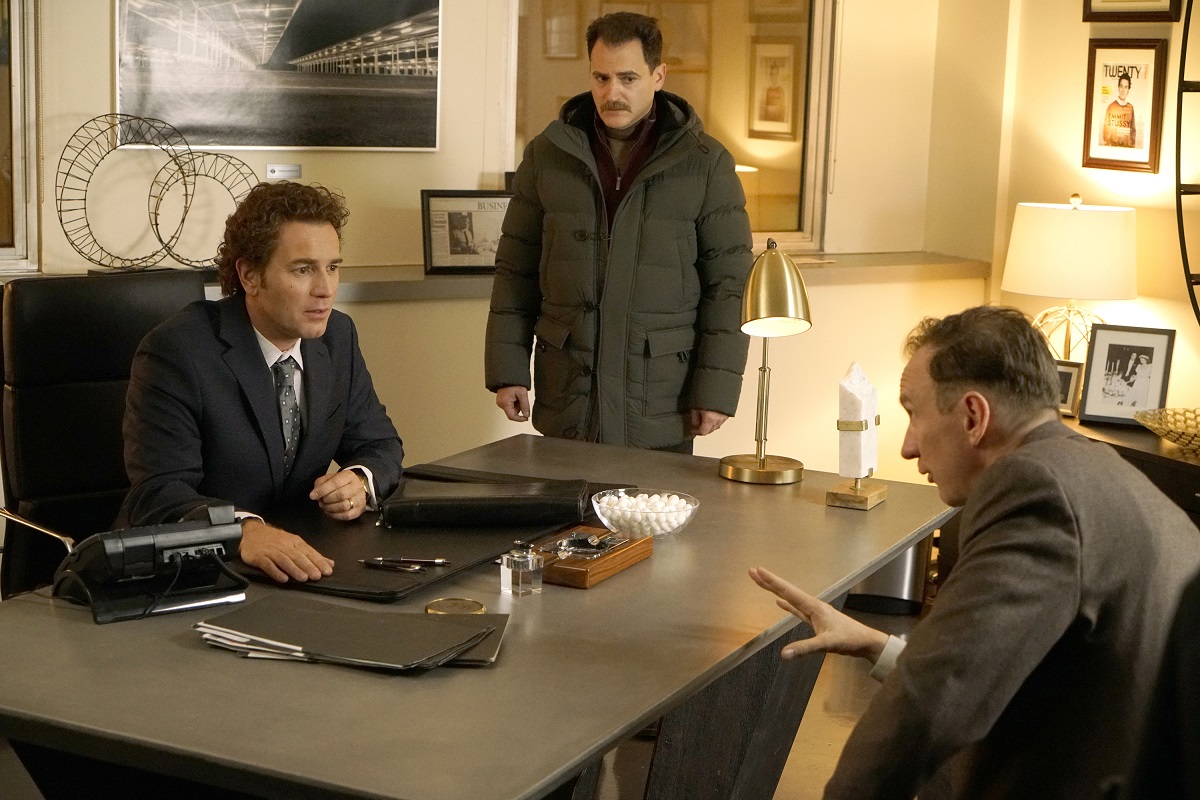 The premiere follows the supremely dumb would-be and wannabe criminals of the white and blue collar variety who just sort of can’t help stepping twice and falling back in it. McGregor plays brothers (but not twins), Emmit and Ray Stussy. Emmit is the super-successful, by appearances anyway, parking lot king in town while Ray is confined to the considerably lesser orbit of a parole officer. There’s animosity between the two because of a vintage stamp collection that Ray deemed his but of which Emmit took custody and only one remains.

When Ray is turned away yet again from getting his stamp back, ostensibly to buy a ring for his girlfriend, Nikki Swango (Mary Elizabeth Winstead, gleefully getting as far away as humanly possibly from Mercy Street‘s MaryÂ as aÂ slightly homicidalÂ problem solver), he sets in motion a plan that upends the life of small town police officer (but not quite sheriff, which is a point of contention), Gloria Burgle (Carrie Coon) and her son, Nathan (Graham Verchere).

Emmit isÂ in some hot water of his ownÂ over a business deal orchestrated by his lawyer Sy (Boardwalk Empire‘s Michael Stuhlbarg). It’s a year past a significant investment that they’re ready to repay when liaison V.M. Varga (David Thewlis, in his first series role in a while) arrives to redefine the terms, and not in their favor.

There’s also a cold open set in East Germany in 1988 that I assume will inform the season in some way, but it’s a lost leader for the first episode as a whole. We’re also told up front that it’s a true story, with names changed but the facts otherwise presented as they happened.

Since I haven’t seen the first two installments, I can’t tell you if there are any wink-nudges back to them. I watched it with no frame of reference to the first two arcs and enjoyed the hell out of it. I could see a lot of the “oh, crap” moments coming and I think that’s part of the fun of watching a show like this–we’re one step ahead of the characters, shouting at the TV to “turn back!” and we know they’re not going to.

Noah Hawley writes and directs the premiere, and similar to his breakout hit, Legion, the tone, style, and music are all over the place and there’s a fair degree of roll-with-itness involved. The frigid, snow-covered Calgary landscapes stand in for Minnesota.

Set in 2010, much more recent than the first two outings, it’s the early days of everybody being glued to their smart phones, and that addiction plays into the first hour, although there is a moment where Emmit actually answers a wired house phone (but has a flat-ish screen TV mounted on the wall above the dining table behind him) so there’s still room for old and new to commingle. Same goes for Ray and Nikki, who could just as easily be sauntering into their bridge tournaments in any of the four decades prior to 2010.

I’m infinitely loyal to McGregor, first because he’s Scottish, and second because I was a nascent flack who worked regional PR for Trainspotting two decades ago. I also was intrigued to see how he’d flatten out his brogue in not one, but two distinct speaking roles where he has to build a character, mannerisms, and voice and remember to bury the lilts.

Tatiana Maslany is the master ofÂ character multiplicity onÂ an exponential scale for Orphan Black, and it’sÂ fun to watchÂ McGregorÂ play two brothers who are each in their own vortexes of desperation, with different means at their disposal to dig themselves out or dig themselves deeper.Â Plus, they just don’t like each other, which makes it highlyÂ amusing to watch McGregor essentially seethe at and plot against himself. So good. So glad they cast him and that he said yes.

I’m looking forward to seeing how all the threads bump up against each other, It most certainly won’t be pretty, but I’m fairlyÂ sure it’ll be awesome to watch.

Fargo airs Wednesdays at 10/9c on FX. The premiere is 90 minutes, so set those DVRs accordingly. Here are a few sneak peeks of the 10-episode third installment.

The Leftovers "The Book of Kevin"

The Leftovers Preview: "The Book of Kevin"