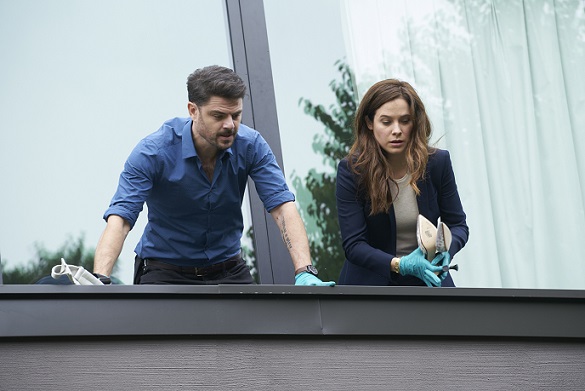 Y’all already know where I stand on my Canadians, and back in January, Canadian network Global TV launched a new six-episode series that thankfully is arriving in the U.S. on Lifetime on April 23rd. Mary Kills People is equal parts drama, suspense, and comedy with a teeny, tiny hint of procedure thrown in. All together, it’s a fantastic headlining return for CarolineÂ Dhavernas, who’s still beloved by many US fans for FOX’s woefully short-lived Wonderfalls, and more recently, her recurring role on Hannibal.

Here, Dhavernas is the titular Mary, a successful Toronto doctor who’s picked up a side hustle doing assisted suicides. While that sentence makes this sound like the mother of all buzzkills in premise, I promise swear it’s anything but, as you’ll see immediately in the terrific cold open that finds Mary and her colleague, Des (Richard Short), confronting an absolute worst-case scenario. The how of it is deliciously poignant dark comedy at its finest.

When she’s not double-booked on the clock and off, Mary balances life at home with her two teenage daughters and pacifies her ex-husband, one of the drivers behind the cash business she’s working under the table. The girls have their own arcs, and Mary’s older daughter’s life smacks right into hers in an unpredictable way that threads through the season.

Des has his own complicated intersections because of Grady (Bitten‘s Greg Bryk, having ALL THE FUN), a local drug dealer who’s integral to his and Mary’s enterprise. Once Mary is on Grady’s radar, things get very complicated indeed, especially regarding what is and isn’t criminal activity and where that line falls.

Ben (Beauty and the Beast‘s Jay Ryan), a new patient who comes to Des and Mary for help via an intricate word-of-mouth referral system, puts a wrinkle in things when he and Mary spark in a not entirely doctor/patient way. Rookie Blue‘s Lyriq Bent plays his friend, Frank, who has his own complex reasons for not warming to Mary.

And that’s all I’m going to tell you, because it’s so much better to watch things fold in on each other and then unravel without knowing what to expect ahead of time. The tone, as I said above, is quite the mix. People are going to die, some by Mary’s hand, some not. There’s so much else going on in the series that there’s something for everyone in this very quick six-episode season.

On that note, I respectfully suggest you avoid searching the social media from the Canadian run and the You Tube fan videos and watch this cold. It’s so worth it.

The show comes to us from Tara Armstrong (ION’s upcoming Canadian import Private Eyes), Tassie Cameron (Rookie Blue and the upcoming Ten Days in the Valley) and Amy Cameron (Heartland).

If you’re new to Richard Short, who’s mostly done theater and film work and was recurring a few years back on 666 Park Avenue, get ready. He and Dhavernas crackle together as two partners with very different lives and takes on what they do, but who are no less bonded to stick together, regardless of the various roadblocks.

Mary Kills People premieres Sunday, April 23rd, at 10/9c on Lifetime. Set those DVRs now, and pad it by an extra minute. Here’s a sneak peek.

The Riverdale EPs and Cast Talk "Chapter 10: The Lost Weekend"