The Psychology of Fashion is Deadly in Bull, “Dressed to Kill” 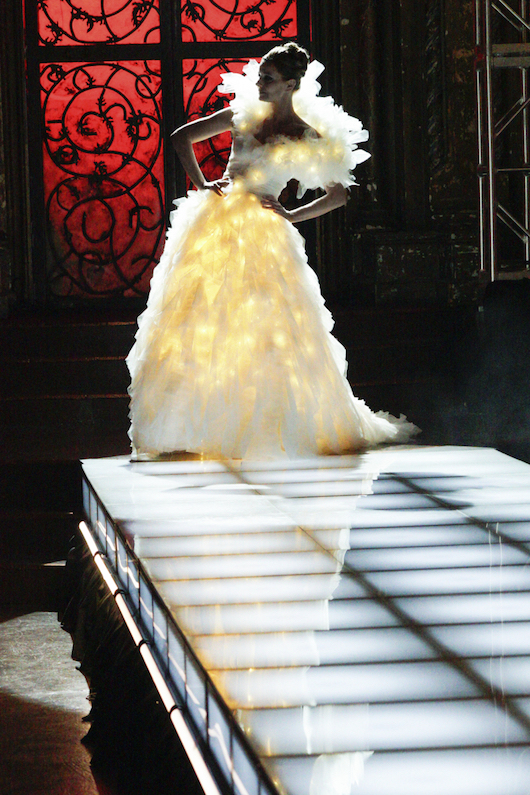 Fashion Week in New York City. No wonder it was almost impossible to look away from the screen tonight. Every move and pose on AND off the catwalk is designed to attract attention and Dr. Bull is in his element from the moment he arrives, reading every nuance of body language being telegraphed.

The scenes on the catwalk are spectacular and visually luxurious, climaxing with Chunk’s friend and mentor, Nella WesterÂ (Paulina Porizkova, America’s Next Top Model), a former model-turned-designer, arriving in the ridiculously amazing finale dress to a standing ovation… before she drops dead in front of everyone.

In some ways, this was a hard episode to watch since it risks what might be the core bromance of the team. As the series has progressed beyond the “case of the week” episodes that introduced the premise and characters, we have been treated to background stories and tidbits for all the T.A.C. team members but so far, we have always had the bedrock of Chunk and Bull’s friendship to depend on.

Meanwhile, Will, certainly doesn’t do himself any favors in the course of the case. He fails to tell the team that he had been asking around for an arsenic supplier, that he sent an email explicitly stating he wanted to kill Nella, and then he breaks into her safe the night after she dies and steals a pair of prototype shoes worth millions. Which he then gives to his fiancee, Kira Petrova (Anna Osceola, Greek) to wear to a Fashion Week party (seriously?).

It’s always fun to see Bull get analyzed and this episode doesn’t disappoint when Chunk and Will take a swipe at his style and apply the psychology of fashion to dissect what his wardrobe says about his personality. Of course, Bull deflects to Cable and Marissa, but Chunk and Will definitely nail a few zingers.

When the team learns about Will’s theft, Chunk calls it quits for the case and it’s a tense time for Bull and Chunk while T.A.C. continues to do their thing, court-wise. They’re up against a rabid little ADA, Neil Pike (Matthew Rauch, Banshee) who seems to have a damning case against Will handed to him but Bull points out that his evidence is all circumstantial so they stack the jury with hard-core pragmatists, unlikely to interpret information creatively.

In the secondary plotline (which, interestingly enough, is NOT focussed on Benny and his off-the-clock antics), Bull’s relationship with Texan spitfire, Diana Lindsay (Jill Flint, “Callisto“) is on a slow long-distance simmer spiced with some naughty texts and phone canoodling. Knowing the good doctor is spending the week surrounded by gorgeous models, Diana makes some insightful comments on the nature of their relationship, never letting him off the hook when he defers more serious relationship business to a later date.

As the team’s investigation into Wester’s murder begins to paint a clearer picture of the truth, the writers do a bang-up job throwing a few red herrings into the mix to keep us guessing. Kira is particularly convincing as a potential suspect. Even Bull feels like throwing her under the bus to keep the jury at bay but Will refuses to sacrifice his relationship that way.

In a parallel scene, Cable manages to counsel Chunk into a reasonable state of mind (in a very Chunk way, I may mention), pointing out that his affection for Nella had a lot to do with his faith in her and that faith in your boss is truly something special. So when Will disappears and Chunk knows where he and Kira probably are, he not only points Bull in the right direction, he drives him there.

When the culprit, Giancarlo, is finally revealed and confronted it is supremely satisfying when he does the does the dumb thing and runs because, as Bull points out, Chunk *was* an All-American football star… and he’s pissed. Watching Chunk take his friend’s murderer down with a flying tackle is the ultimate closure to a case that threatened a (possibly THE) foundational relationship of the show.

With happy endings all around, including a new recently-retired runway model taking over Bull’s assistant position, it was still a pleasant surprise to see Bull take that personal leap and fly to Texas for a breakfast date with the lovely Ms. Lindsay. It feels like there are many changes in the wind for our intrepid heroes. Can’t wait to see what comes next!

Fargo “A Fox, a Rabbit and a Cabbage”