Dancing with the Stars “Season 24 Week 2” 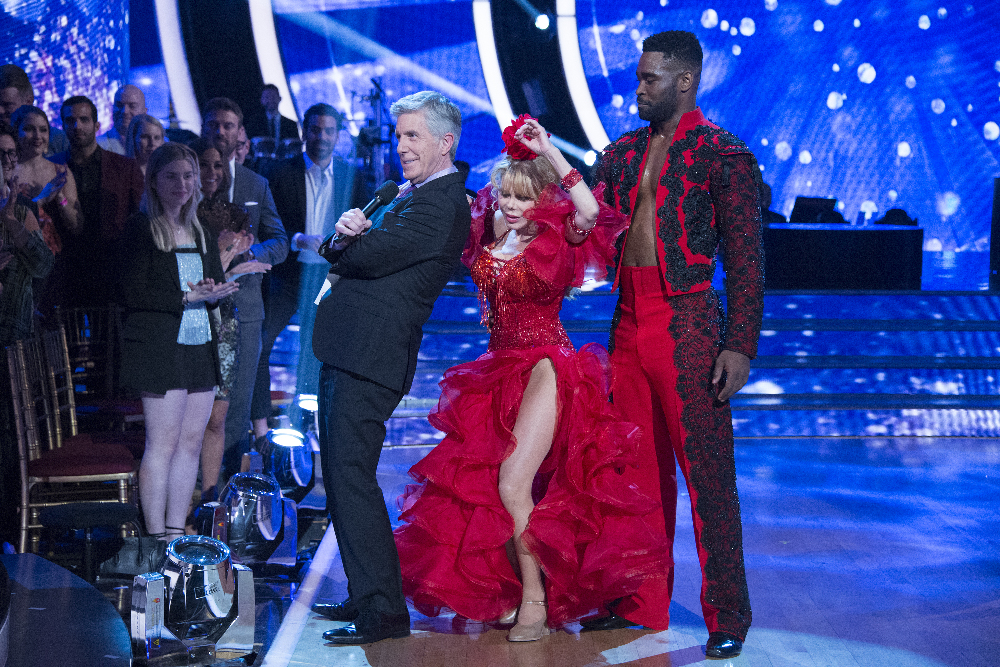 It’s Week 2 of ABC’s Dancing with the Stars, which means the first couple of the season gets eliminated.

Some quick notes: Poor Maks, he was injured during rehearsal, but more about that later. Len was a little grumpier than usual.

Were the dances better or worse this week? Letâ€™s find out:

Nancy Kerrigan seemed to be a bit restrained with her dancing. She has to work on follow through and learn how to trust her partner. Nancy also seems to have a confidence issue. This is a woman who has performed for the whole world so why is this making her feel this way? Len thought she did a nice job and I think that is the best assessment of her Cha Cha.

Last week Erika Jayne was told she was a little bit raunchy. She doesnâ€™t apologize for who she is and has the confidence to perform. She danced a beautiful and sexy Foxtrot.

This is a request for anyone who reads this: Please vote for Charo to at least stay on a few weeks. She’s quite entertaining and you never know what you are going to get. TheÂ Paso Doble was okay but her craziness is what I enjoy. Poor Tom and Keo have to fend off her energy, but itâ€™s so worth it! And she enjoys yelling at Bruno, and told him that his English sucks! Probably one of the funniest moments on DWTS ever!

Nick Viall from The Bachelor is definitely out of his comfort zone. He messed up a bit and didnâ€™t try to hide it. He seemed like he was rushing at times, but otherwise it wasnâ€™t terrible.

In practice during the week Maks did something to his calf so he had to step away from the dance floor. Alan Bersten from the troupe came in and saved the day. Heather was brilliant. She showed what a great dancer she is. Len wasn’t happy because of the little bits of hip-hop they included in the dance. Julianne Hough said she was glad because ballroom is not like hip-hop at all although she thought Heather might have been a bit hesitant in the Jive parts. I didnâ€™t see that, I just saw a professional.

No one can deny that Bonner Bolton and Sharna Burgess have crazy chemistry. They are the Jana Kramer & Gleb Savchenko of this season. Actually, I think they sizzle more! It was an elegant dance. Bonnerâ€™s frame was good and if he continues to improve, he will probably get to the finals! And maybe get himself a girlfriend?

Simone did a lovely job. She had a few slight missteps but the girl can move. Sasha is in heaven because they can do flips, which he seems to love. Her scores were lower than last week but being the competitor she is, she’ll come back stronger.

In the package before they danced, we discovered that Chris had broken his neck several years ago. Because he’s a physical comedian, he canâ€™t really do the sort of things that he’s known for, which is upsetting. So he has some challenges. The judges were nice and it was good that he tried.

As we found out last week, Normani is touring with her group Fifth Harmony. Val and Normani had to travel to Asia and get in practice whenever was necessary. They even flew in to Los Angeles a few hours before airtime.You would not have known it because they were on fire. Normani looked liked she has been practicing for weeks! She’s definitely a contender.

I have mixed emotions with this dance. I thought Rashad showed his vulnerable side and that he’s comfortable with who he is. His hands and feet need work but he made Len smile. He’s another one to watch. I thought he should have gotten 7s, which is why I was on the fence about the execution of this number.

First, Mr. T did much better then last week. This week, he and Kym used the song “Eye of the Tiger” from Rocky III. (If you are asking why, he was in the movie. Ah, the young.) Mr. TÂ had the steps down this time but, of course, there is room for improvement.

All David Ross wanted to do was live his school years, back in the 90s. I donâ€™t think this tactic worked. There wasnâ€™t enough Cha Cha. I agree with Len. He needs to up the ante on his technique and footwork. The positive is he has tons of energy and will hopefully work on the judgesâ€™ comments.

And then it was the elimination portion of the show. There wasnâ€™t a lot of time left so they just announced the two couples in jeopardy: Chris & Witney and Charo & Keo. Everyone else was safe and continuing on to next week.

The first couple going home was Chris & Witney. I think this was obvious but someone had to go.

The first cut was made.Â Who do you think will go next? Also donâ€™t forget to vote. We want to keep Charo in for at least a weeks, right?

Next weekÂ it’ll be Vegas night! Iâ€™m curious to see what that means.

In Bull, We Trust When Playing the "Name Game"