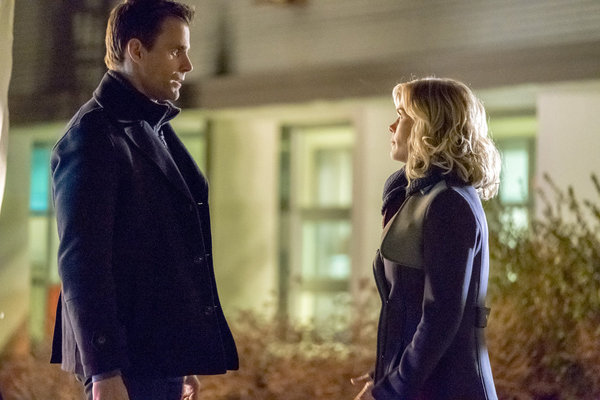 It’s been nine months since we last had a new Murder She Baked. My favorite Hallmark Movies & Mysteries franchise returns this Sunday with the fantastic Just Desserts. It’s set just long enough after A Deadly Recipe that Hannah (Alison Sweeney) and Mike (Cameron Mathison) are finally together (yay!) and Norman (Gabriel Hogan) is still in the picture as a friend to both of them, which I love. I recently chatted with Mathison about the change in dynamic in the new film, coming off award season as an entertainment journalist, and what’s next for him.

This time out, Mathison got a Supervising Producer title on Murder She Baked, and he says it’s a formal recognition for something he’s always done. “I’ve been involved in the same capacity through all the films, reworking the scenes, helping make things work,” he explains. “It’s sort of understood when you do these that you have 15 days and everybody’s helping out. It was nice of them to offer me a producer role to take note of whatever efforts I put in.”

Hannah’s choice of suitors has been a common thread in the previous films, and in the newest outing, she finally has chosen Mike. Mathison explains that was a natural progression that outpaced the books, but the fans were ready for it. “In the series of the books, it lingers for a lot longer. I think because, watching the movies and in today’s world, it was thought maybe it was dragging too much, and Hannah would make a decision one way or another,” he says.

“I think it’s nice that Norman is still very much in her life, and moving on, too. We hit some bumps in the road in this film. You don’t want anything to be too happy or perfect, although Hart to Hart seemed to make that work. My favorite may have been this [film], and Plum Pudding was up there, too.”

We last saw Mathison in December in A Christmas to Remember, a heartfelt companion to his equally lovely The Christmas Ornament, and he enjoyed getting to play another more serious holiday role. “I like the ones with heart. I’m lucky that they bring those to me,” he says. “I loved the script and thought the character was fun and nice, and working with Mira [Sorvino] was a dream, and the kids were great. It all came together very nicely.”

Mathison recently wrapped up a whirlwind entertainment industry award season as part of his day job on Entertainment Tonight, and it was a long haul. “I started with these guys at the Toronto Film Festival in September,” he points out. “That’s when I first met everyone from Lion, La La Land, Moonlight, and Manchester by the Sea. It was such a cool journey to be on.”

He enjoyed working the SAG Awards on the red carpet and backstage doing the interviews, but the Academy Awards were the big deal this year as Mathison was positioned to do interviews at the Governor’s Ball that takes place at the venue immediately afterward.

“That was super exciting. Everyone files out and gets their statue engraved. Usually it’s a nice little ride. It’s not a groundbreaking moment. But this year, it was everything,” he says. “It was the first time to get a reaction to that ending…it was the aftermath that was the biggest deal. I got [everybody] right after it all happened. I got the first interview with Jordan Horowitz [the La La Land producer who announced Moonlight as the actual best picture win] as he came out of the theater.”

Next up, Mathison says he’s “plugging away doing some fun stuff at ET” and developing projects for Hallmark. “There are a couple of things we’re trying to brew and time out with ET. They know that my relationship with Hallmark is very important and they’ve been amazing,” he says. “And Hallmark is very kind and accommodating about my ET schedule. We’re trying to work out cool scripts and good fits. I’ve been very lucky.”

The fifth film in the series, Just Desserts involves a series of accidents (including a fall for Hannah so Sweeney didn’t have to hide her cast and crutch from a ski injury) and then a murder that occur around a televised baking competition. The entire cast returns, along with David Lewis (Birthday Wish and Dirk Gently’s Holistic Detective Agency), and Tammy Gillis (Signed, Sealed, Delivered: The Impossible Dream).

Murder She Baked: Just Desserts premieres Sunday at 9/8c on Hallmark Movies & Mysteries and Mathison will be live Tweeting. The first four films will marathon beforehand beginning at 1 pm/noon c. Here is a sneak peek.

Leave a Reply to Pamela B Cancel reply