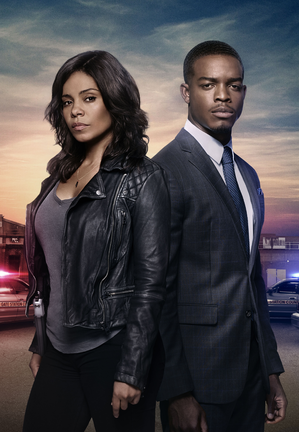 They had me at “Event Series” and Sanaa Lathan to be honest. What I love about an event or anthology series is the laser focus the show brings to a subject or a group of people. I like the deep dive we go on to look at whatever the series wants to examine. In this case, we’ve got a familiar subject — the police shooting and killing an unarmed young man — but the twist is that this time it’s a black officer who takes the life of a white teenager. To add further layers of complication, it’s the only black officer on the force in a Southern town that is pretty racially segregated. The DOJ lawyer, Preston Terry, and his investigator, Ashe Akino, discover another racially charged police shooting in the case of their investigation — this one more familiar in that it’s a white officer who’s killed black teenager. The Governor’s office inserts itself into the mix when things look pretty cut and dried, but as the investigation slowly takes its course we get to see how that branch of government can help or hurt them. And did I mention the Governor will soon be up for re-election? Ultimately, we need to know if this was a clean kill (if there even is such a thing) or if there’s much more beyond the surface.

The EPs and stars set it up:

I had the chance to talk to actor Yohance Myles about the series and why he wanted to do it. He told me one of the reasons he was interested was because of the producers, “Gina [Prince-Bythewood] and her husband [Reggie Rock Bythewood].” He’s a huge fan of Love & Basketball and wanted to be involved with them. Also because he’s ” an African-American father of 5 children, so I think that hit home for me.” A native of Birmingham, Alabama, he thought being involved in this series would lead to a conversation about not only how the black community deals with this situation at home, but ” weâ€™re talking about racial injustices and inequality across the world.”

Weâ€™re introduced to Yohanceâ€™s character, Leon Grant, in Episode 3. I donâ€™t want to give too much away prematurely, so come back in two weeks for part 2 of my interview.

Hell on Wheels Preview: “One Less Mule” [PHOTOS and VIDEO]