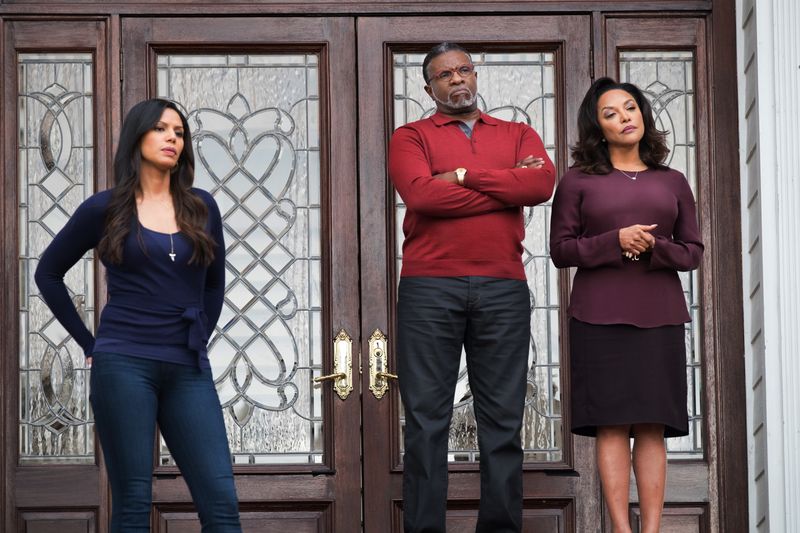 If the season two premiere of OWN’s Greenleaf is any indication, Bishop and his family will need to cling to theirÂ faith to get them through what’s headed their way.

Certain members of the Greenleaf clan are falling apart when new episodes return tomorrow night. On the flip side, others are in a better place, which is huge, considering where they were last season.

Staying strong areÂ some of the show’s rivalries. Gigi and her mother, Lady Mae? Their relationship is as turbulent as ever. Lady Mae and her sister Mavis? What’s a word that’s worse than turbulent? Bishop’s not feeling the love from his son, Jacob, who’s finding life working for his father’s enemy, a lot less complicated. And then there’s Mac. He’s not someone who went away (to jail) quietly. In fact, he’s out. You’ll find out how in the world a man who committed the sins he did is breathing fresh air. It’s an incendiaryÂ secret. Meanwhile, Kevin and Charity’s marriage remains rocky even as she’s ready to give birth.

If the family drama isn’t enough to keep things interesting, the politics at Calvary areÂ no joke either. Some of the deacons on the board are upset. Their ire might mean dire things for the Church, which is in a precarious position already over scandals that have erupted involving the Greenleafs.

Official OWN Synopsis for Greenleaf Season 2

The show really seems to up the drama in this second season, which is something we are beyond ready to see. In the premiere, more secrets are unleashed and at least one of those is saved primarily for the audience. Plus,Â there’s more Oprah Winfrey as Aunt Mavis in the first episode. A lot more.

We’ve only seen the premiere so far, but Gigi’s love interest from last season — the entanglement that was super messy considering he was about to get married — seems to be gone and relegated to the past. Benjamin Patterson’s Noah Kendall doesn’t appear in “A House Divided.”

The season two premiere of Greenleaf debuts tomorrow night at 10/9c on OWN.

The Walking Dead "Bury Me Here"