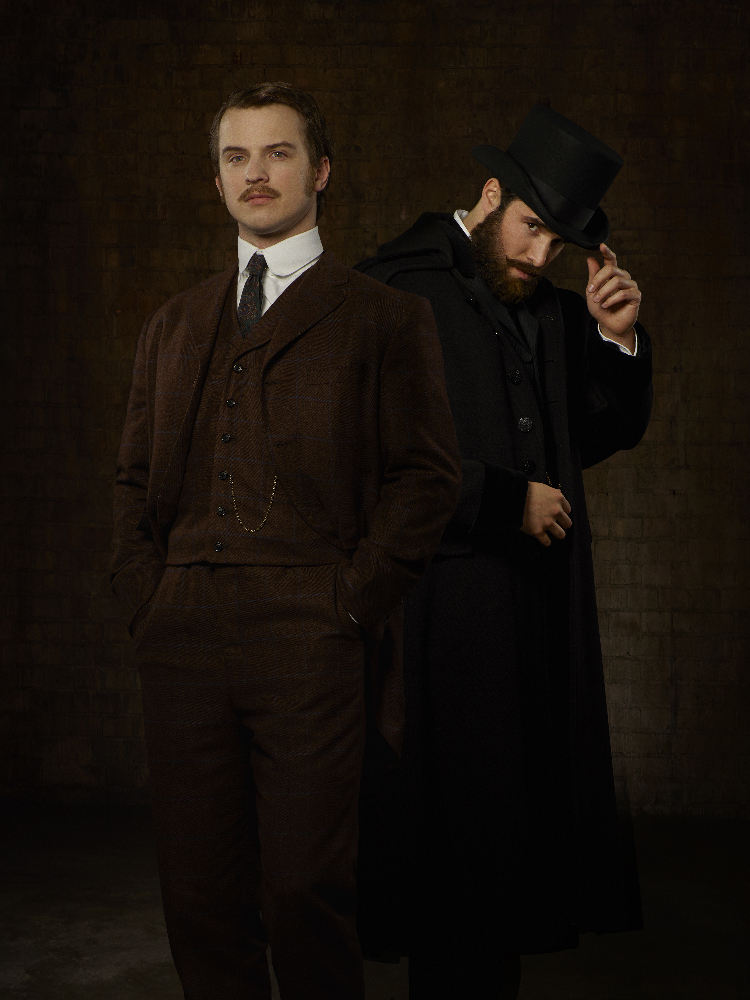 “We all have our time machines, don’t we. Those that take us back are memories…and those that carry us forward, are dreams” – HG Wells

Memories and dreams may be all we have in the real world, but when ABC’s Time After Time lands in your living room Sunday, the fictionalized H.G. Wells will have the potential for so much more — namely a REAL time machine and REAL time travel!

Of course this isn’t the only time travel show on the schedule this season, but that doesn’t make it any less compelling. While shows like Timeless and DC’s Legends of Tomorrow give us characters from the current day and transport them back to meet famous historical figures, Time After Time actually takes characters from the past and bring them to US.

Loosely based on the 1979 film of the same name starring Malcolm McDowell and Mary Steenburgen, the concept is not entirely original, but from what we have seen so far, we can definitely say that their 2017 approach to the fish-out-of-water tale is unique and makes for a good story. Especially when one of those characters is legendary serial killer Jack the Ripper, who just so happens to adjust to modern day incredibly well…maybe even a little TOO well.Â At a recent Q&A, Josh Bowman (John Stevenson aka Jack the Ripper) and creator Kevin Williamson discussed H.G. and John’s adaption issues. H.G. has had a tougher time learning the ways of the modern world.

Josh Bowman: Well, I think we wanted to make him somewhat of a chameleon, someone that’s hard to catch. It’s a cat-and-mouse thriller so we wanted to bring…have Wells jump through more hoops than John would have to just because the villain would have to be a step ahead of the protagonist.

Kevin Williamson: It seemed to easy to take H.G. Wells, who wrote of the future, who predicted the internet basically, to be this guy who goes to the modern and just picks it up. That seems like a character arc.

Both Bowman and his co-star Genesis Rodriguez talked about why this is a project they wanted to be a part of.

Genesis Rodriguez: First of all, I love everything sci-fi, that’s where I should live always. At all times. Secondly, Jane’s a very strong, smart woman. I related to her a lot. She’s just dived into her career, she’s independent, but then this charming man comes along and sweeps her off her feet. And that’s very much what I feel like women still want, they still want a little bit of romance and excitement in their lives even though we’re very much career-driven and focused women. But she really is the hero of this show. She’s saving H.G. every episode time after time. It’s a great thing to be able to be the one to be the hero of the show, I guess. Silent hero. Quiet hero.

We caught up with Freddie Stroma (H.G. Wells) and EPs Williamson and Marcos Siega at last summer’s Comic-Con where they told us what to expect when the show catapults into our living rooms this Sunday.

Executive Producer Marcos Siega talks about season one and how H.G. Wells’ famous novels will tie in to the show:

Creator Kevin WilliamsonÂ gives us more insight in to season one and how the mythology will play in as the twists and turns unfold:

Star Freddie Stroma fills us in on HG Wells dreams for the future and how 2017 measures up:

Kevin echoes Freddie’s sentiments and tells us why now is the perfect time for a show like this:

Serial killing, time travel and love?! Marcos fills us in on the love story and as with any show with two hot male leads, the potential for a love triangle:

Kevin follows up by telling us why these two lovers are actually star-crossed, as well as what could be the potential end game:

From jolly old England to modern day New York, Freddie and Marcos give us a peek in to how HG adapts to his new surroundings:

Marcos gives us some insight in to how the show will compare to the 1979 film and how the cast is perfectly suited for the project:

The two-hour premiere of Time after Time debuts tomorrow night at 9/8c on ABC.