The Walking Dead “Hostiles and Calamities” 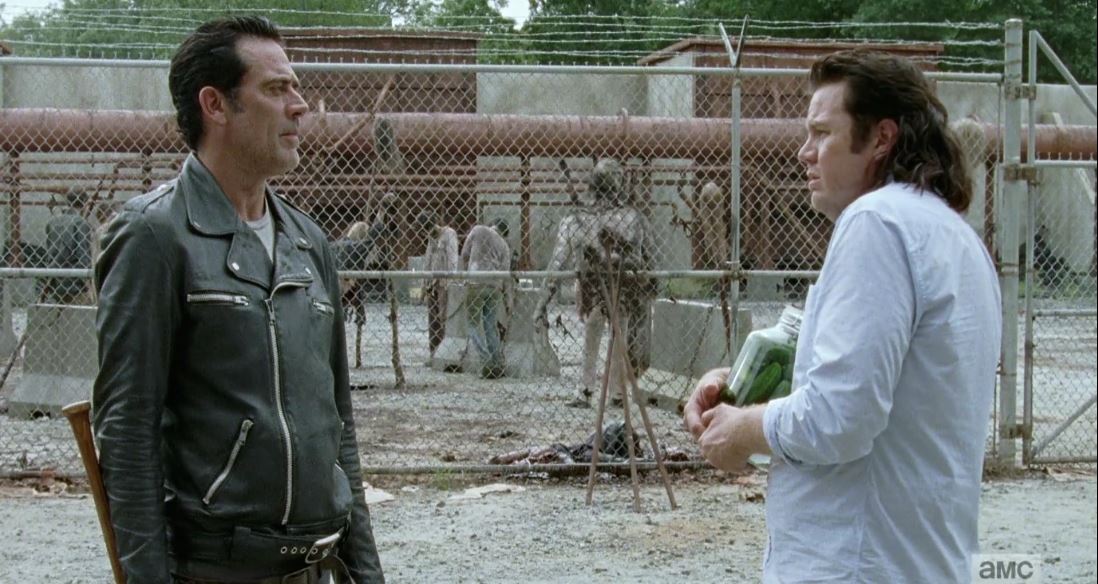 We need to talk about Eugene.

Eugene has been labeled a coward time and time again. However, there have been brief moments of selflessness that gave us hope he could eventually step up and be brave.

The Walking Dead Season 7 Episode 11, titled “Hostiles and Calamities,” led us to a fork in the road. Is Eugene about to turn on those who thought they could trust him?

After being taken prisoner by Negan, his introduction into the world of The Saviors was… not too bad actually. In a surprising turn, Eugene was treated to food, comfortable sleeping quarters, and video games.

This is certainly a drastic difference from how Daryl was treated. Negan is a smart guy for the most part. He can recognize Eugene is intelligent and sees the value in him.

Little does Negan know that Eugene isn’t all that he claims to be. Eugene spun the same narrative that he used on Abraham in order to survive.

Eugene is an opportunist. I don’t mean that in the sense of power. I mean it as a strategyÂ to stay alive.

That’s why I’m not sure where Eugene stands after this installment. Theoretically, Eugene could live very comfortably with The Saviors. But if his lies comes to light, he’ll be screwed.

On the other hand, he could be playing a long con. He gave very specific instructions for how best to keep the walkers upright and functional around the compound to keep people out.

Negan seemed downright thrilled by the plan, but it’s possible Eugene’s system could be fatal to the compound. Maybe Eugene thinks he can take down The Saviors from the inside out.

Eugene befriended some of Negan’s wives as they chatted, watched him playing video games, and conducted a science experiment for them. Eugene hadÂ little interest in the women sexually.Â He seemed very uncomfortable when one of the wives put her hand on his leg.

I had really hoped the women genuinely liked hanging out with Eugene. I’m sure they did on some level. It must be nice to hang out with a man who isn’t out to use them for his sexual pleasure.

However, Tanya and Frankie were trying toÂ use him for their benefit. They claimed Amber was miserable (which is very much true), and said they wanted Eugene to created two pills to end her misery.

To no one’s surprise, they actually wanted to use the pills on Negan. Eugene was savvy to their plot and refused their pleas.

The other main focus of the episode was Dwight. Sherry made a run for it after letting Daryl out to escape. Negan wanted Dwight to find her and bring her back.

The writers have done a stellar job at making Dwight a complicated and conflicted character. Unlike Negan, Dwight isn’t all evil.

HeÂ does horrible things in the name of Negan, but you can tell he’s miserable the entire time. That’s what makes Sherry’s letter so heartbreaking.

After going to the home they once shared, Dwight finds Sherry’s wedding rings and goodbye letter. It’s clear these two were once madly in love and would have done anything for each other.

The crazy thing is that they are still capable of loving each other in unexpected ways. Sherry’s letter revealed just how much it hurts to see the man he’s become, essentially because of her. She gave herself over to Negan to save Dwight’s life.

Even though she saved him, they were in hell. Living with The Saviors isn’t living, and she couldn’t stand by and watch Dwight slip further away from the man he once was.

I have no doubt that had Sherry been waiting for him at the house, Dwight would have run off with her. After all, he did show up with the pretzels and beer.

Still Dwight was able to do Sherry a kindness by pretending she was dead. Bringing her back to Negan would solidify himself as a coward.

Sadly for the doctor, Dwight pinned Daryl’s escape on him. He claimed Sherry told him how the doctor developed feelings for her and let Daryl out as a way to make her happy.

Negan doesn’t like anyone touching his property (i.e. his wives), so instead of simply using the hot iron on him, he threw the doctor into the furnace. Damn!

Eugene and Dwight are seemingly at opposite ends of the coward spectrum right now. However, it’s impossible to say where either man will be come the end of the season.

Check out a sneak peek of the next installment, titled “Say Yes.”

Game of Thrones “The Broken Man”