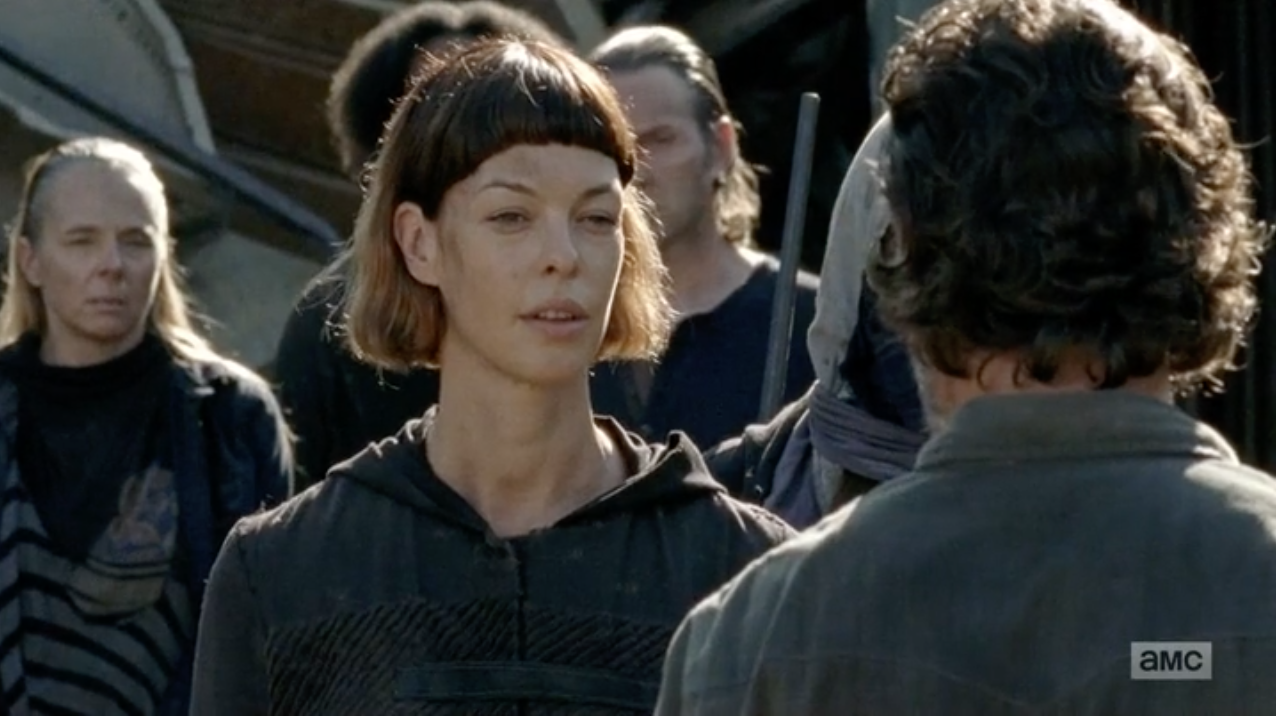 Has Rick finally found a group to help him defeat The Saviors?

The Walking Dead Season 7 Episode 10, titled “New Best Friends,” introduced us to another group that originated from the comics. While they haven’t been given an official name yet on the series, it’s clear they are The Scavengers.

Rick and Co. found themselves surrounded by The Scavengers who seemed out of this world… even in this zombie apocalypse. They are a collective that appearÂ militaristic and wear matching dark outfits.

Oh yeah, and they live underneath aÂ landfill. This group isÂ straight out of a dystopian YA novel, only with more greasy hair.

We quickly learned the leader of The Scavengers is a woman named Jadis. Once Rick came forward as the leader of his group, the negotiations began. Jadis asserted her group takes, but doesn’t bother. Gabriel and the supplies he took from Alexandria were now in her possession. It was up to Rick to buy back their freedom.

However, Rick made it clear they had nothing to offer. Everything they had belongs to The Saviors. Rick seemed assured his little speech about their groups joining up to defeat Negan would work. Instead, Jadis seemed amused and said no.

Why would this woman risk her group for a bunch of strangers. What would be the point?

GabrielÂ told Jadis that her group could add to their inventory because The Saviors have been taking everything. Gabriel was resolute that Rick could win againstÂ them.

Of course Jadis isn’t a fool. She wanted to put Rick to the test, and boy did she ever!

After being shoved down into a a trash pit, Rick came face to face with one of the coolest walkers we’ve seen yet. Rick was forced to fight for his life against a walker named Winslow covered in spikes.

Rick managed to take down Winslow, because of course he did. Aside from his impaled hand, Jadis found Rick worthy of partnering with.

Before offering their services in a war against The Saviors, Jadis wanted guns. Rick promised her they would return with what she required.

Normally I don’t get too excited anymore when we meet new groups, because there are way too many right now, but Jadis and The Scavengers are intriguing. They are unlike any other group we’ve come across, as they seem so far removed from the way the world was before the walkers took over.

What I find fascinating is that this group is led by a woman. I hate that this is something that I noticed, but female leaders are few and far between.

The Oceanside group doesn’t count because they are all women, and while Deanna was in charge of Alexandria at first, they weren’t exactly a formidable group at that time. Every other mixed gender group we have come across has been led by a man.

The Scavengers seem like a highly organized group, and the men, as far as we know, don’t seem to take issue with a woman at the top of their hierarchy. I am definitely intrigued to learn more.

Elsewhere in the episode, tensions between The Kingdom and The Saviors grew as Richard squared off with Jared. Ezekiel would have to be blind not to see where this is all heading. He can’t keep the members of his group safe for much longer. The Saviors are going to eventually strike.

Richard is starting to lose his mind over The Saviors.Â With Morgan and Ezekiel being no help, Daryl seemed to take to Richard’s plan to stop The Saviors.

Unfortunately, Richard’s plan included taking out some Saviors and making it look like a loner in the woods that Ezekiel cares about did it. Daryl quickly figured out that loner was Carol. Of course Daryl threatened Richard that if any harm should come to Carol, he would place the blame entirely on him.

Daryl and Carol’s reunion has been a long time coming. However, their conversation by the fireplace was frustrating.

Carol doesn’t want to be a killer anymore. We get it! Still, that doesn’t change the world they live in now. Carol’s recent journey into self-imposed isolation is so annoying.

I want badass Carol back. I am sick of watching her push away her family. This is the same crap we watched Morgan deal with, and it’s just not realistic. You can’t survive in this world without protecting your loved ones from those who are looking to hurt them.

Daryl’s reasons for lying to Carol about The Saviors retaliation are valid. He knew that if he told her what happened to Glenn and Abraham that she would want to fight. Daryl doesn’t want to put her in that position.

Still, as a viewer I found the scene maddening. They need her help, and she should know what happened to them.

After bidding Carol farewell, Daryl found time to bond with Shiva. When Morgan came into the room. Daryl explained how he found Carol but didn’t tell her about the people they lost.

Daryl insisted that Morgan must get The Kingdom to help them fight, but Morgan wouldn’t budge. Once again, I get Morgan’s moral stance, but his need for peace is going to get a lot of people killed. It’s only a matter of time.

Check out a preview for the next installment, titled “Hostilities and Calamities.”