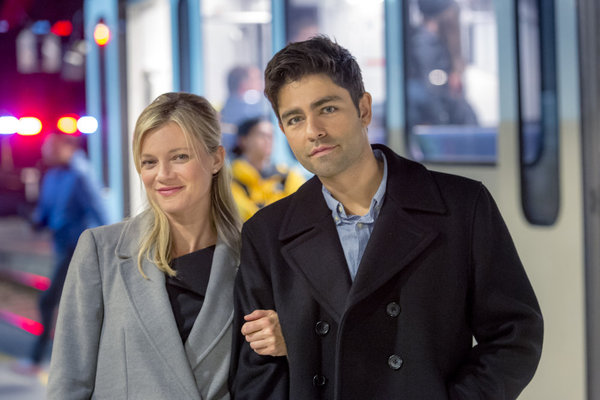 Amy Smart and Adrian Grenier make their Hallmark Channel debuts Valentine’s Day night with Love at First Glance, which follows a courtship through text messages and a little reverse engineered meeting of the other’s friends.

SmartÂ plays Mary, a newly-singleÂ strugglingÂ journalist who spies Grenier’s James across the way while on the ride home from being dumped. They share a sweet moment and thenÂ he gets off the train without his phone.

She’s unable to catch him, and lost and found is no help, so she works her way through his contacts to find out who he is, partly for a story she’s pitched and partly for herself. He’s working in Europe andÂ figures out thatÂ sheÂ has the phoneÂ and starts corresponding with her through textsÂ while she paints a secondhand picture of the kind, thoughtful child he was and man he is.

The setup means we don’t get Smart and Grenier together onscreen much, but instead follow Mary on a series of adventures that teach her as much aboutÂ James as herself. It’s a sweet twist. The cast also included Good Witch‘s Rhys Matthew Bond as a young James, Awkward‘s Jonathan BennettÂ as Mary’s BFF, Victor, and John Shea as James’s dad, Marshall.

Love at First Glance premieres Tuesday night at 8/7c on Hallmark Channel and repeats throughout the month. Here’s a sneak peek.

The Walking Dead "Rock in the Road"