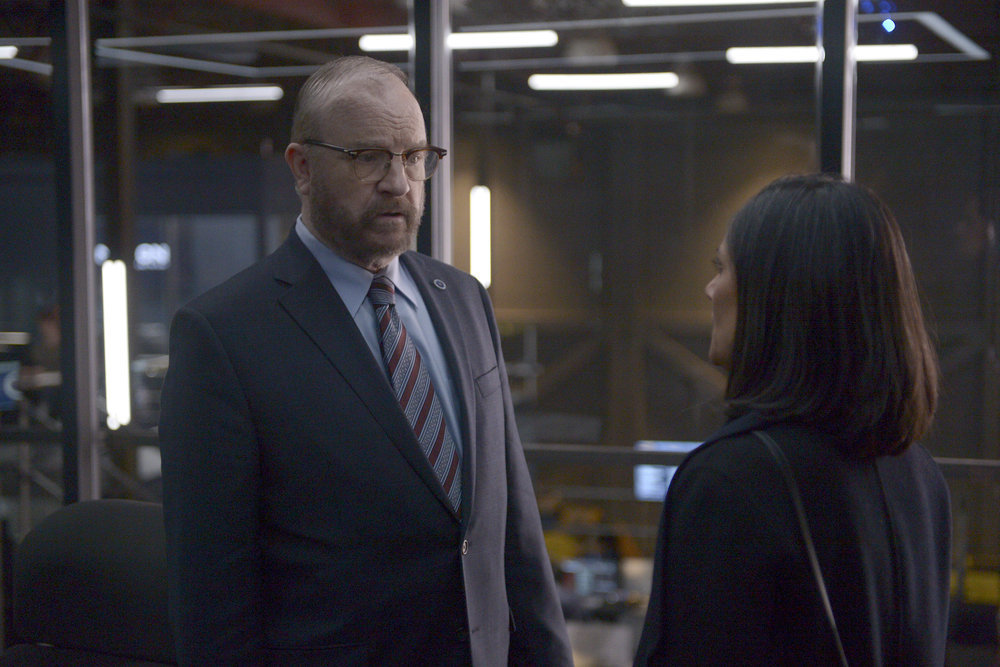 On NBC’s Timeless, the guy went back to 1983 to try to prevent the man who allegedly killed his wife from ever being born. But guess what? He did just that and saved two lives in the process. Two lives. Not three, which means someone else must have killed his wife. Was Jessica destined to die? The mystery continues but who knows when Wyatt will be able to tackle it considering he was led off in handcuffs after stealing the Lifeboat for his personal mission.

Meanwhile, Lucy finally confronted her dad, the man who is knee deep in all things Rittenhouse.

Did you hear him? He told LucyÂ that Rittenhouse is “your legacy and it’s nothing to be ashamed of. It’s a gift.”Â That has to be very scary for the historian who prides herself on fighting the good fight.

As for Rufus, he’s had to face a couple of things: Anthony’s dead. Just when Rufus’ mentor decided to go rogue and destroy the Mothership, heÂ becomes aÂ casualty of the explosion. Flynn and former Lifeboat pilot Emma, are nowhere to be found.

Plus, there’s the fact that his days of being a valuable and not in anyway expendable commodity are numbered. BecauseÂ Connor is training Rufus’ girlfriend to command the Lifeboat. And he’s doing it in the most surly and grumpy way possible. The minute Jiya knows what she’s doing — and can land that time machine gracefully and successfully — Rufus is going to need to watch out.

Connor Mason also needs to watch out. He knows he’s losing control and he’s not reacting to this fact in a cool, calm manner. AgentÂ Christopher doesn’t trust him at all. He has Rittenhouse bending his ear and making things difficult. This guy’s a wild card and that’s dangerous with only three episodes left in the first season of Timeless.

Which brings us to tonight’s episode. Supernatural fans are going to want to tune in if they haven’t already. In Season 12 of the CW series, Ghost Bobby’s nowhere to be found. Good thing Jim Beaver is able to materialize on Eric Kripke’s NBCÂ show. The co-creator of Timeless (along with Shawn Ryan) tweeted about Beaver’s three-episode appearance today:

Beaver’s not the only Supernatural alum appearing in “The Lost Generation.” Annie Wersching, who guest starred in the season two-episode, “Playthings,” and who also appeared in Kripke’s other NBC series,Â Revolution, once again guest stars as Emma, the time traveler stranded in the Wild West in “The Murder of Jesse James.” She’s nowÂ working alongside Flynn.

There’s also the Wyatt factor. What’s going to happen to him now that he’s burned a few million bridges with his stealing-the-Lifeboat stunt? Rufus and Lucy are going to have to time travel without him. What’s that going to look like?

There are some hints in the official NBC Synopsis for “The Lost Generation.”

Meanwhile, locked in an undisclosed location, a despondent Wyatt (Matt Lanter) gets a visit from Agent Christopher (Sakina Jaffrey), and the pair is left wondering if their enemies are closer than they realize.

The man who gets to embody Charles Lindbergh is Jesse Luken.Â On Syfy’s The Magicians, he was Mike, a minion of the Beast, the one who was involved with Eliot. Eliot ultimately had to kill his former lover, which messed him up big time. Luken has also starred on Glee, Star-crossed and Justified.