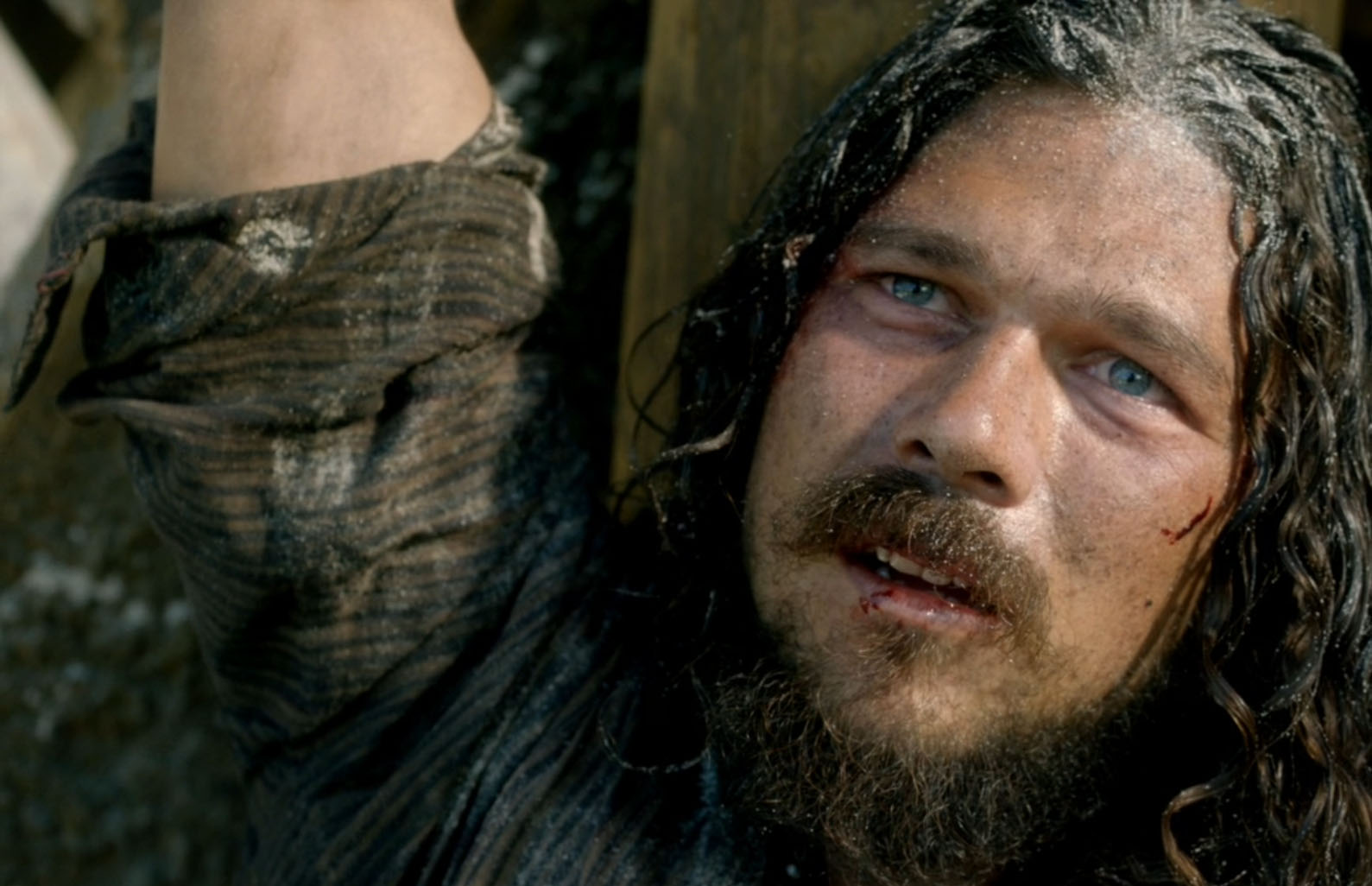 Hanging by a thread, the pirates try to regroup; though that proves difficult with more than 120 of their men captured, countless dead from battle, and no sign of John Silver. Flint’s impatience and distrust grows by the day, yet a quiet moment between he and Silver just before the battle shows how far their relationship has come. Even joking that he “hadn’t considered killing [Flint] in months.” His absence, when so much is on the line, is felt most by Flint because the Captain has now lost the intermediary and glue that holds these fractured groups together.

Silver has always been able to talk himself out of any situation — something that was made abundantly clear from the series premiere. However, as Black Sails has progressed, he’s developed an uncanny ability to talk others into bending to his will. The silver tongued devil has amassed more power than he ever thought possible, and with the hour at hand, well laid plans now find themselves out of reach.

The flashback of him and Madi in bed together shows, mentally, just how far behind he is. He seems to wrestle more with the different sides of himself than anything else. The evolution of his relationship to Flint has brought them to a place of genuine friendship, which is why Silver takes issue with Billy’s propaganda machine back on Nassau.

While Silver is isolated and finally letting the legend of his name take hold within himself, the fragile alliance between Flint, Billy, and Madi is crumbling under the weight of ego. After their attempt to take the Underhill plantation, Madi learns of a safeguard most effective that stops them in their tracks. Rodgers learns from his mistakes, and after taking such a loss at the end of the third season, he devised a plan to repel the very idea of another uprising. Already broken and desperate, their plan to acquire more men fails because the plantations have been split up. Families were all separated in such a way that should one plantation revolt, their wives, sisters, children, husbands at the remaining plantations would all be murdered.

An ingenious move that shows how serious Rogers is about keeping Nassau under “civilized” rule of law, despite he himself being abandoned by the crown. Having effectively cut off the pirate supply of new recruits, his opposition is rendered helpless and the few pirates who remain are forced to flee into the plantation fields to escape capture.

The Governor’s cunning must be appreciated because he now seems to always be two steps ahead of Flint; who for three seasons proved to be a master tactician. The chess game has gotten even more complicated after Billy actually ordered his men to fire upon Flint and his followers. Not only has the Governor stopped their advance from both the beach and the interior, his actions have now pushed the men past breaking points. And with no John Silver to ease tensions, have we finally seen an irreparable hole in our pirate contingent?

Silver may be out of commission, but he is never out of the fight. Who but Silver could find themselves captured (by Israel Hands (David Wilmot), former companion of Blackbeard) and weaponless one moment, then to wind up with a new ally shortly thereafter? This exchange between the two begs the question as to who really has the upper hand.

“Who are you that I ought to pay you any mind?”

“I’m no one, from no where, belonging to nothing. I’m a wretch like you. Yet mountains of gold have changed hands because I chose it. Thousands of men in Nassau are living in fear of my return because I decreed it. Hundreds of dead redcoats in a forest not far from here because I made it so. I am the reason grown men lie awake at night. I am a new beginning for Nassau. And you’d trade all of that for, what? 500 pieces?”

Here, yet another plan falls through as Max apparently solidifies her stand on the side of Governor. However, the introduction of Hands weaves yet another character from Treasure Island into the Black Sails narrative. Additions like Hands and Berringer provide more depth early in the season allowing for the a more complete and complex story to play out over the remaining eight episodes of the series.

How will Berringer’s villainy play into the fate of Nassau while the Governor is away? Will Hands transition from scavenger to a more integral role? With Silver up and moving once more, Flint and Madi now separated from Billy, and Blackbeard et al. in pursuit of Rogers, Nassau sits in limbo as its most powerful players all war amongst themselves.

Black Sails is back next week with “XXXI”. Tune in Sunday, February 11th, at 9/8c on Starz.

Nashville “I Can’t Get Over You to Save My Life”