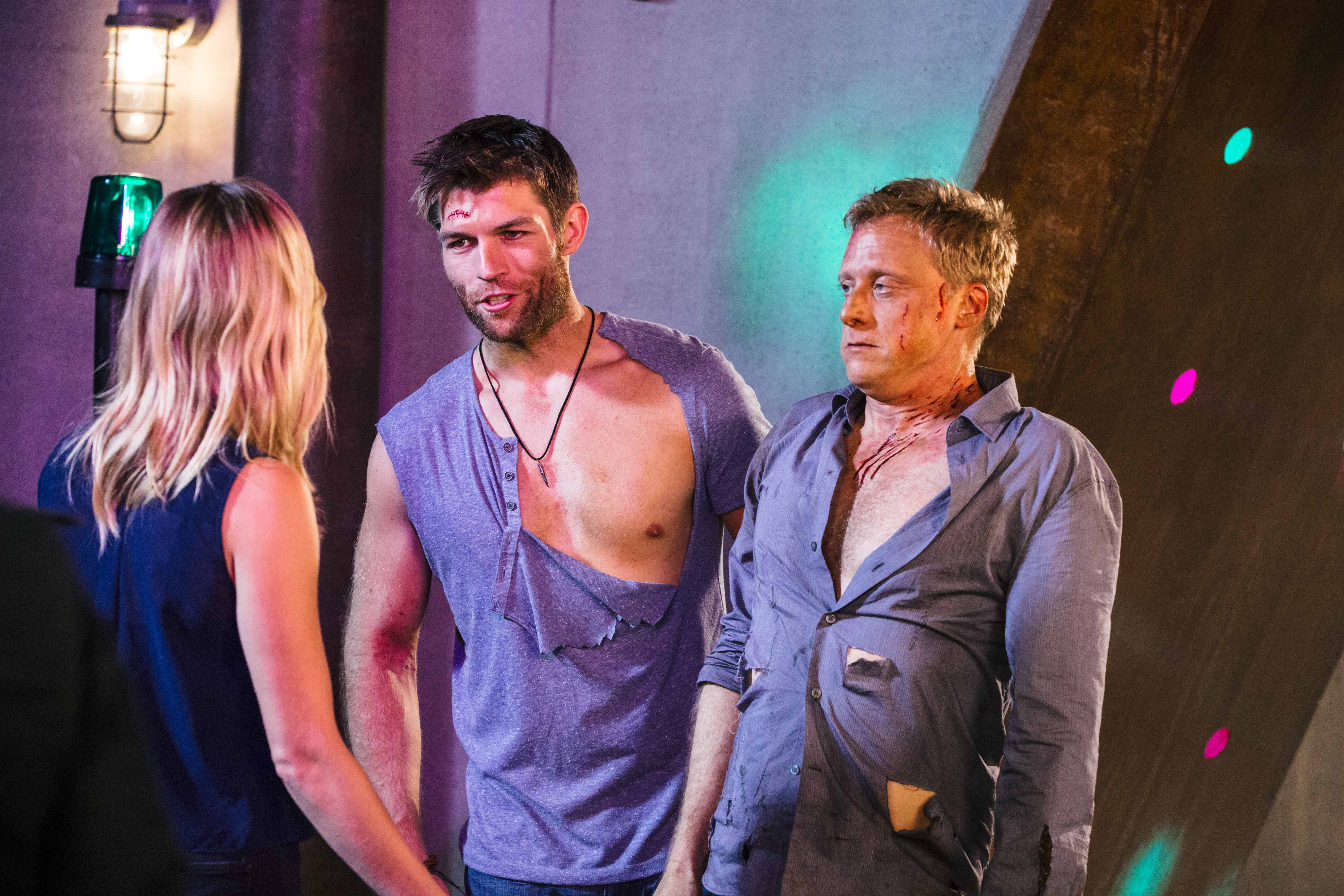 One of my favorite running gags over the course of Con Man Season 2 is the talk about how there’s a seemingly endless supply of Hemsworths out in the world. And that these rugged Aussie men are taking all of the jobs away from the American actors.

After all, Nathan Fillion’s Jack Moore was bumped for one of them. And now his Spectrum pal Wray Nerely (Alan Tudyk) is going mano a mano for the lead role in the new sure-to-be-a-hit procedural, Doctor Cop Lawyer. Wray’s nemesis: Girth Hemsworth, played by Spartacus and The Flash star Liam McIntyre.

The two even tackle that Obstacle Course of Doom the Shock-a-Con Talk-a-thon hosts Janet Carney and Rico Java kept talking about. They, thankfully, escaped from the danger zone with their lives in tact. Well, Wray earned himself a concussion, while Girth prevailed as the warrior since he helped his rival out.

The Moment of Goodness for this finale — and the season really — is that Finley picks Wray for the job. “You exude brokenness,” she says. Apparently, it’s just the right of brokenness and desperation the character needs. Given these parameters, it’s not a shock that Wray is way more broken than the very put together Girth. Girth doesn’t seem to have a flaw in sight.

The other reason Wray’s the perfect man for the job is that Finley abhors drama which means it’s not wise to get involved with her costar. For her, that’s not going to happen with Wray. She wants to date Girth. So it’s actually a win-win situation for the guys. Wray gets the job. Girth gets the girl.

With the news that he booked the lead role, a job that should go in a long way into getting him out of his sci-fi rut, Wray finds out the series starts shooting on Sept. 15. Because this is Wray, things never go easy for him. It just so happens Jack announces to the convention audience, who are there to witness the Spectrum reunion, that the movie version of Spectrum will start shooting — wait for it — Sept. 15.

This leads to some awkward moments where Wray chooses himself over the Spectrum reunion, the cast, the fandom. And more importantly, he chooses himself over Jack. He’s going to do Doctor Cop Lawyer. Jack is clearly not having this. He looks calm, but you can tell this is a problem.

A drunk Tiffany (Skyler Day), who up until this point looked (and acted) pretty comatose, makes the suggestion that they change the start date of the movie. This means Wray can probably do both.

But before the action cuts to black…Jack sends a text of doom…one that might send Wray back to rock bottom. JackÂ says he now wants to be Doctor Cop Lawyer. It’s a job that he never wanted before, but now that his friend has it, he wants it. But can he get it?

This cliffhanger sets up a third season where it’s no longer Wray vs. any given Hemsworth. We might be seeing Moore vs. Nerely. This conflict has been bubbling up all season long. Jack was happy to put Wray up for the job as Doctor Cop Lawyer as long as it meant he’d also do his part to prop up the Spectrum movie. But now that Wray is the star and all Jack has is this reunion?

Hmmm…I hope we find out about a third season soon. And that it has as many great guest stars as it did this season. An impending Spectrum movie means we’ll get to see more of the cast that includes Amy Acker, Liza Lapira and Henry Rollins. It was so great to see them — in all their creepy glory — in Season 2. It was also fun to see Casper Van Dien as Wray’s personal bartender/drink server. The Starship Trooper references were wonderful. Did the image of Van Dien change to Dina Meyer at one point? I think that was her.

I’m also pretty sure that was Orphan Black‘s Kristian Bruun as the stage manager guy who took over for a talked out and exhausted Janet Carney during the Shock-a-Con Talk-a-Thon.

You can catch the second season of the Alan Tudyk / Nathan Fillion / PJ Haarsma series, Con Man, on Comic-Con HQ.

Tuned In Exclusive: This Is Us Composer Siddhartha Khosla on the Evolution of the Show's Sound and More

Once Upon a Time “Breaking Glass”

Grief, Gun Control & the Fitzgerald Grant Show, Scandal “The State of the Union”