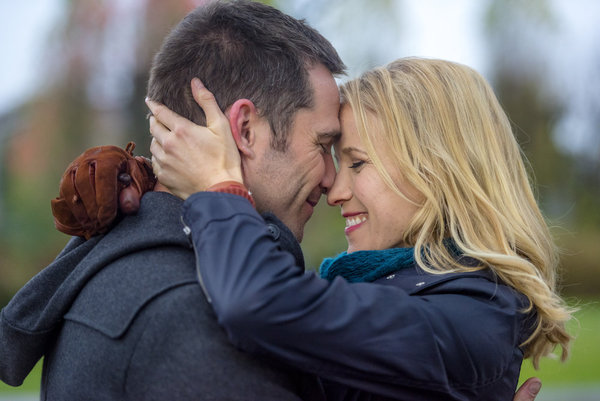 At a certain point, some networks just start trolling us. Case in point, Hallmark Channel brings us the delightful Luke Macfarlane Saturday night, with a side of puppies. How is that fair, y’all? Just two months after we had the treat of him in another Christmas film, The Mistletoe Promise, Macfarlane returns for Birthday Wish, part of what I call the network’s recurring wish fulfillment/deferment films (Lucky in Love, A Wish Come True, and the recent A Wish for Christmas).

Jessy Schram, who was last on Hallmark in 2015’s Harvest Moon, stars as Gwen Turner, a TV commercial director whose life is planned out in lists (another common Hallmark theme–The Wish List and last month’s Christmas List) that includes a marriage proposal by her 30th birthday. She thinks she’s on track for that with her longtime boyfriend, Alex (Framed for Murder‘s Marcus Rosner), a local weatherman who’s a little too self-obsessed, until her birthday comes and goes without a ring.

While she’s struggling to process that, she starts working more frequently with a new advertising creative director, Dave (Macfarlane), who’s funny and charming and kind and all the things it never occurs to Alex to be. The morning after the disastrous not-proposal, the universe gives her a nudge with a peek at her life ten years ahead, and she’s extremely flustered to find a future with Dave and not Alex. That sets in motion a series of personal reflections about “If not this, then…” as she spends more time with Dave and less time with Alex and realizes that maybe that prescient glimpse wasn’t so far-fetched.

Director Peter DeLuise is always, always so good at these. This time out, he directs a script by frequent Hallmark writer Julie Sherman Wolfe. There’s a lovely camaraderie among all of the cast, which includes David Lewis as Gwen’s colleague and the head of her work tribe, Bruce, and Yvonne Chapman as her BFF, Mia. Barbara Pollard, who co-starred with Schram in Harvest Moon, plays Gwen’s mom, Katherine.

Y’all know that Macfarlane is one of mine, so he’s always welcome on my TV, and even better, I enjoyed his character. Here, he plays a good guy who’s not looking to upend his new friend’s life but is sort of unable to not do that when he feels something more than collegial friendship. Schram is very good, too, playing someone who’s so laser-focused on one path that the left-field suggestion otherwise throws her way off her game, until she finally takes a step back, with some help from the cosmos, her mom, and new and old friends.

Birthday Wish premieres Saturday night at 9/8c on Hallmark Channel and repeats throughout the month. Here’s a sneak peek.

Everyone Has Something to Learn, Bull "Teacher's Pet"