The Vampire Diaries “Detoured on Some Random Backwoods Path to Hell” 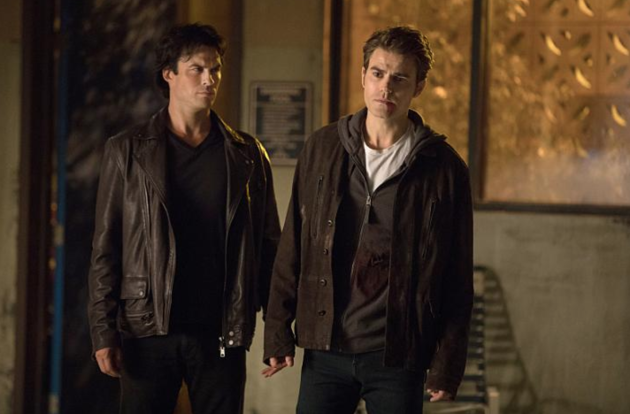 What an emotional episode of The Vampire Diaries we got this week — and Paul Wesley happened to direct it. Stefan and Caroline were on the rocks, Enzo almost died again and the twins were kidnapped. However, while the episode was emotional, I did have some issues. It again laid the groundwork for episodes in the future, but how we are getting to the bigger storylines is taking too long and not fulfilling. Letâ€™s dig in.

First up:Â Bonnie and Enzo. This episode puts Enzoâ€™s life in danger for about the sixth time. I get that this is the final season so they really could kill off any character at anytime but enough is enough. Enzo is the new Tyler, don’t you think? Tyler left every season but always came back. Now, Tyler is really dead and that death fell flat because it didnâ€™t mean as much. The same thing is happening to Enzo. Every other episode, Bonnie and Enzo have an emotional scene where she thinks he is going to die but then he doesnâ€™t. If Enzo does actually die at some point this season, it will feel cheapened to me.

One of the plots that didnâ€™t pay off in the end was the twins’ involvement with the sirens. I was so excited that the existence of the twins would play into the Devil/Siren storyline this season but this amounted to nothing. Seline did kidnap the twins with the purpose of trading the twinsâ€™ souls for Seline and Sybilâ€™s. While Selineâ€™s intention was to propose the twins to Cade in 10 years, her timeline was pushed up because of Sybil.

Damon is very intrigued about the ability to get out of Hell by working for Cade and then trading your soul for someone else. This brings about a plan that Sybil and Damon create. Damon wants to present Stefan and his life to Cade, meaning the Salvatore brothers would be servants to Cade in exchange for immortality. One would assume that Damonâ€™s plan is do this for some time and then trade his and Stefanâ€™s life and be free from Hell.

Basically, the plot of the last few episodes –Â Seline being very interested in the twins and teaching them magic — ended with nothing. They were safely returned to their parents. Now, I know without the twins being kidnapped, Stefan would never have accepted the deal to be Cadeâ€™s servant but I was so looking forward to the twins playing a larger role this season. Iâ€™m still hopeful they will but with Caroline telling Ric that he needs to take the twins away from her and vampires makes me think that my hope may be misplaced.

The episode ended with Ric and Matt attempting to kill Damon. Technically, they did kill him; they staked him in the heart. But this was after the deal with Cade so he already has immortality on his side. What was frustrating about this scene was that the episode ended with Damon turning blue and it appearing that the life was be drained from him. Why? We know he is not going to be killed (at least not this early) so this seemed like a waste of time as well, especially when we see him alive in the preview.

I know it seems like Iâ€™m bashing the show in this review but I would call it constructive criticism. I loved the last couple of episodes so this episode felt like a let down. Iâ€™m still very excited for the rest of this season because Sybil is interesting and Cade as the devil sounds like the perfect last Big Bad.

The Rundown
-The speech Ric told to Seline about hunting her down and killing her was probably some of the best work Matt Davis has done in some time.
-There was more to the Enzo storyline but I just canâ€™t put forth any effort to discuss it. The show has never really found a proper place for this character since he became a series regular.
-Iâ€™m still holding out hope that Caroline will move to The Originals after this season and Stefan having to leave Caroline could be the first catalyst for this to happen.

The Vampire Diaries airs Fridays at 8/7c on the CW.

Once Upon a Time “Souls of the Departed”