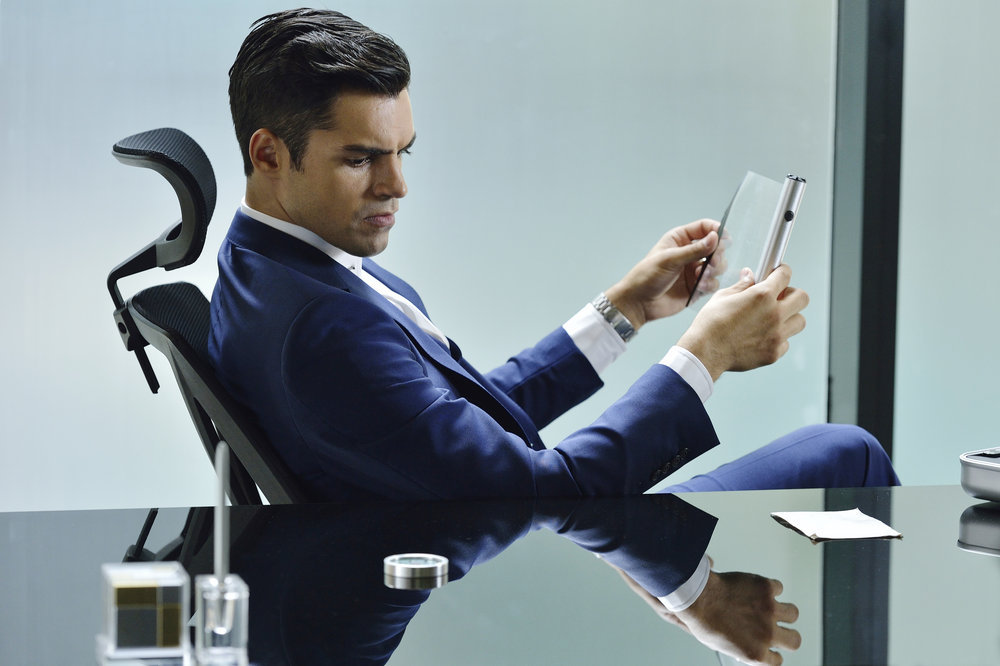 It’s been about 15 months since casting on the Incorporated pilot was announced, and Wednesday night, Syfy finally launchesÂ the first season of the drama seriesÂ withÂ a dual-network (with USA) premiere.

The series is another take on a dystopian future–this time, 2074–where the haves are allowed to walk semi-freely among the have nots, but the have nots are confined to a much grittier existence and very specifically locked outside the gilded walls.

Sean Teale plays Ben, a rising corporate exec inside the walled metropolis who’s playing the game, down toÂ Laura (Allison Miller), the woman heÂ married, except that it’s all a ruse forÂ a secret agenda tied to his past, back before he was Ben.

His story is further complicated by his personal ties to Elizabeth Krauss (Julia Ormond), the head of the company that’s calling most, if not all, of the shots for how they live, andÂ Theo (Eddie Ramos), a young man living on the edge ofÂ a life of crime outside the city.Â Ben’s beholden to keep an eye him on for reasons that play out over the first season.

The cast also includes Dennis Haysbert as Krauss’s enforcer, Julian, andÂ (my) Ian Tracey as Terrence,Â the less-than-reputable businessman that Theo aligns himself to when a theft goes sideways.

It’s a slick-looking show with an interesting take on the crushing suffocation that comes with maintaining the order of a seemingly perfect life, especially when you are consciously aware of your elevated status and you choose to engage with the rest of the struggling population as a strange sort of release. As I watched, I was most reminded of the 1997 film, Gattaca.

Fans who liked Teale in Reign but wanted more of him than we got from Conde’s storyline won’t be disappointed.Â  He has a full-fleshed out arc here as a man trying to maintain one existence while retaining a loyalty to his past that quickly becomes dangerous when he realizes he can’t keep them separate.

Y’all know I can always watch Tracey, and after the sudden cancellation of Witches of East End, it’s nice to have Ormond back in a weekly role.

Incorporated premieres in tandem on Syfy and USA Wednesday night and thenÂ airs Wednesdays at 10/9c on Syfy. Here are a few sneak peeks plus the entire pilot if you just can’t wait.

Vikings' Katheryn Winnick Previews 5 Scenes to Expect in Season 4B