Dancing with the Stars “Season 23 The Semifinals” 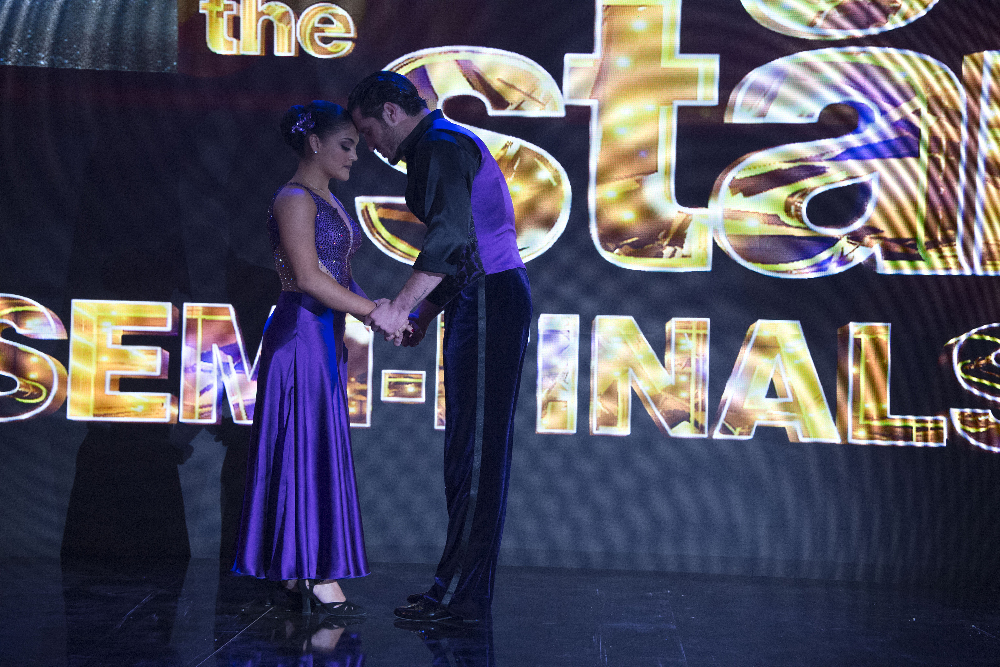 It’s semifinals time on ABC’s Dancing with the Stars. Can you believe it? Come to think of it, I think I say that every season!

Each couple has to perform two dances this week. One is the famous trio round! Everyone brought their A game because all five finalists wanted to go to the finals so badly. Unfortunately, someone was going home. Who was it?

Letâ€™s see how our couples did:

Sharna came back which made everyone happy! James blindfolded her at the beginning of the dance. That’s what you call total trust. After last weekâ€™s mistake, James wanted to return with a vengeance. And you know what? He did. One thing, though. I happened to agree with Carrie Ann. There were minor (and minute) mistakes, but when he held himself over Carrie on a chair at the end? It was total brilliance.

What I loved about this dance was it showed her struggle as a little person but how she always overcame everything. She has defied the odds. Once again, I agreed with Carrie Ann. It was beautiful and each movement was perfection.

As Len would say, this is a proper Quickstep. In the beginning, it was a bit off. But once they got in to it, the two of them were flawless. Jana has been a great dancer from the beginning, but she has improved so much since Week 1. We all know she and Gleb have off-the-charts chemistry. Will it be enough to take them to the Finals?

I think Calvin is another person who has come so far. Unfortunately, with his Tango, he seemed to make some mistakes and parts of it were a bit awkward, to be honest. I personally didnâ€™t like the beginning with the avant-garde wall and the hands grabbing at them. It just didnâ€™t work. While his lines were very good, the mistakes were too great.

Laurie and Val came out with an explosive, passionate, emotional dance that anyone would have been proud of. She cried her eyes out after it was all over, which made me get teary for her. The content was amazing and the fact she did that dance the way she did it shows the powerhouse that Laurie is.

Jenna was the obvious choice to complete the trio since she filled in for Sharna while she was recovering. The partnership that the three of these people have is incredible and it was almost an advantage for them. Considering this man almost died 18 months ago, it is an incredible feat that he dances the way he does.

Terra makes me so happy. This is a girl that when she dances you forget she is a little person. The reason is because she dances so big and goes for it ever single time. She had fun with this trio that also featured Artem Chigvintsev. I agreed with Carrie Ann (yet again) that Terra slayed the Tango.

Of course, Alan was the best choice for the third dancer since he helped out when Gleb was hurt. There was quite a power that came out of Jana that no one had seen before. Gleb put a lot of content in the choreography. As I was watching, I felt like something was off, but that obviously was just me. Jana has chemistry with both these men and it is hot!

Best friends Lindsay and Witney were together again! And they got to do some amazing tricks because of Calvinâ€™s strength. The one with the both of them at the same time — it was pretty fantastic. The routineÂ was fun and you could see the pure joy on Calvinâ€™s face.

Of course when you have the brothers together you can expect magic! And Laurie fit right in with them as the little sister. It was powerful and it told a story. Laurie is in it to win it!

Now for the elimination announcement. The couples that were safe: Laurie & Val, James & Sharna, and Jana & Gleb. The two couples in jeopardy were Calvin & Lindsay and Terra & Sasha.

The couple asked to leaveÂ the ballroom was Terra & Sasha. And she got two perfect scores tonight! This meant Calvin & Lindsay advance.

Iâ€™m sad Terra wonâ€™t be there to compete, but at least she ended her Dancing with the Stars run on a high note.

Tom: â€œApart from the accent that was a killer Sharna impression.â€
Tom: â€œYou are better than him!â€
Erin: â€œWere those fans just in the way?â€
Tom: â€œCarrie Ann did you bring tissues for all of us?â€
James: â€œWelcome to our trio. Wait, what!â€
Julianne: â€œThatâ€™s the hottest pit crew, I ever saw!â€
Tom: â€œIâ€™ve never seen tattoos looks so not at home on Sasha.â€
Tom: â€œBy the way, for the holidays, a book of metaphors by Bruno will be the perfect stocking stuffers.â€
Erin: â€œCalvin and the double mint twins, give me a break!â€

Who will win the Mirror Ball trophy? We’re about to find out next week. And bonus: Len will be back and all will be well with the world! This is a close race and anything can happen. You better vote!