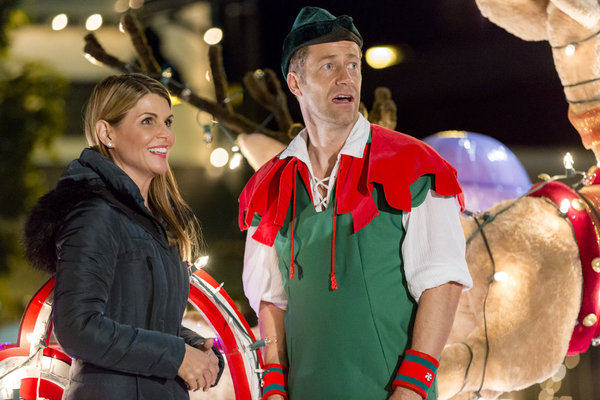 We can all use a little cheer right about now, and Hallmark Channel, Hallmark Movies & Mysteries, and UP Television have already started rolling our their 2016 crop of holiday movies. Click on the links above for the full rundown of newbies. Here are theÂ November titlesÂ that caught our eye with folks we’ve known and loved around TV Goodness for a while.

Y’all know where we stand on Colin Ferguson from way back, so we love that he’s been added to the movie rotation after his stint on Cedar Cove. Here he stars opposite Lori Loughlin in a tale of a TV personality who retreats to a small town to repair her image after an on-air gaffe, which pairs her with herÂ with a long ago ex-boyfriend.

Two more When Calls the Heart regulars also have movies this month. First up, Erin Krakow stars with Niall Matter and Wendie MalickÂ in a story of a young woman who was orphaned as a young girl by her single mother’s death, never learning the identity of her father. New clues take her to New England, where she enlists the help of a local man in findingÂ the truth about her dad.

Daniel Lissing stars opposite Jessica Lowndes in a romance about a faux couple who might be the real thing when a spontaneous admission requires them to spend time together in the run up to a Christmas wedding. Based on the novella by Denise Hunter.

Dean Cain returns to Hallmark (after Operation Cupcake) starring opposite Melissa Joan Hart in another film tied to TV broadcasting, this time in a story about two anchors competing for a coveted promotion who are asked to find the perfect Christmas story.

Thanksgiving night, Alicia Witt and Gabriel Hogan reteam after 2014’s Christmas at Cartwright’s, which follows a woman’s mission to have a storybook ChristmasÂ in a snow-covered cottage, ticking off a bucket list of classic holiday traditions, when suddenly it all doesn’t goÂ as planned. Susan Hogan (Gabriel’s mom) also stars–she starred withÂ Witt inÂ 2013’s A Very Merry Mix-Up.

Bitten‘s Greyston Holt stars with Cindy Busby (Cedar Cove) and Christopher Russell (last year’s Merry Matrimony andÂ recently on Van Helsing) in a story about new beginnings after a woman’s destructive puppy causes her to lose her boyfriend, her apartment, and her job. A change of scenery does the trick until old ties come calling.

Kristin Davis and Eric McCormack come together in their first film for Hallmark in a spin on A Christmas Carol. Upon her untimely death, workaholic Eve MorganÂ finds herself tethered to her guardian angel (Shirley MacLaine) and learning to become a Christmas angel in Heaven and working her first assignment–helping a struggling singer use his musical gifts to heal old family wounds.

Niall Matter logs a second holiday film, this time for UP. Leah Renee (Love by the Book) plays a champion figure skater rehabbing after an injury who strikes a romance with a local man who’s more than he seems.

Oliver Hudson makes his Hallmark debut opposite Candace Cameron Bure in a time-travel tale about a WWII era nurse transported to 2016, where she meets a man who helps her discover that the bonds of family and the true meaning of Christmas are timeless. Tom Skerritt and Brooke Nevin also star.

TheÂ Christmas Secret‘s John Reardon returns for another holday film, this time with Mena Suvari. She plays an ADA single mom whose Christmas is derailed by the arrival of her estranged retired police officer dad (James Brolin) and his dog. Reardon plays a friend of her dad.

Check back in December for a rundown of more new holiday titles!

Mid-Season Preview: Lights Out and Off the Map