Dancing with the Stars “Season 23 Week 9” aka Showstoppers Night 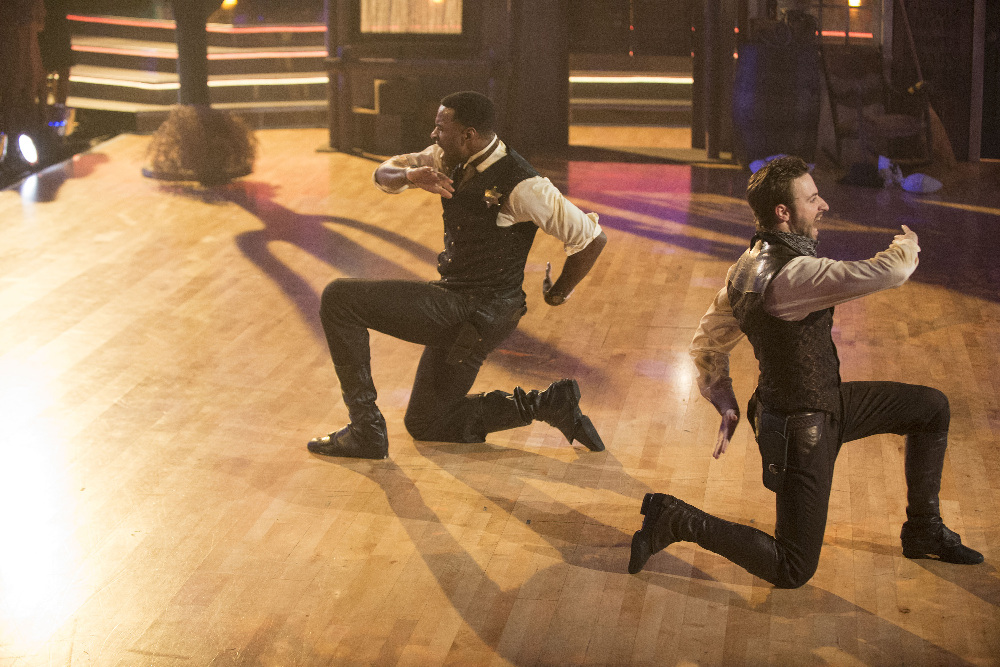 On ABC’s Dancing with the Stars, it wasn’t just Showstopper Night, it was also the Team Up Challenge. The semifinals are next week, so everyÂ pair knew they had to step up and work hard in rehearsals.

One of Broadway’s biggest superstars appeared as guest judge this week: Idina Menzel. You know her. On the stage the Tony winner’s brought down the house in Rent, Wicked and If/Then. She also voiced Elsa in Frozen, which is responsible for one whopper of a showstopper: “Let it Go.”

Did the dancers’ hard work pay off? Let’s see how our couples did:

I thought Marilu and Derek did very well. Although truth be told, Mark Ballas sang a little off key with his Jersey Boys castmates, so that was a bit distracting.

Marilu is very inspiring. She and and Derek have a nice bond. She has struggled with herself in the competition but this time around you could tell she just enjoyed herself.

With help from singer Leona Lewis, Calvin was smooth on the dance floor. He is a really good sport considering he dressed up in a Cats outfit during the week. (His former teammates Iâ€™m sure enjoyed that!) I agree with Carrie Ann — they were a bit ahead of the music. Otherwise, they had lovely lines and worked as a team.

Sharna’s still injured so that left James to dance with Jenna Johnson once again. Even though he messed up in the middle of the dance, he’s still a great dancer. While it’s clear that it’s difficult for James to not have Sharna by his side, he’s doing a fantastic job with Jenna.

Terra struggled with the physicality of her routine during rehearsal. But when it came time for the real thing, she worked it! Actually, this was one of my favorite dances of the evening. She shines when she dances and, as a result, she earned her highest scores of the season. Bravo!

Gleb injured himself during rehearsal. He had some trouble with his knee. This caused Jana to freak out thinking she wouldn’t be able to dance with her partner. After all, he has been her rock all season long. In the end, he dancedÂ and all of Janaâ€™s emotions were completely in her body. I feel like I say it every week. Jana and Gleb have an incredible partnership.

Laurie’s dancing as well or better than any of the pros! Her Argentine Tango was beyond perfect 10s. She was so worried about being sexy but she made it happen because of her work ethic. Val has done an outstanding job making Laurie a better performer. This was the first time she used her power as a gymnast in the dance. Thereâ€™s a reason this little lady has a Gold Medal!

The Team Up Challenge

Itâ€™s always nice when a bromance develops! The last two male celebs in the competition, Calvin and James really were a fantastic match. There were some slight mistakes in timing but, overall, it was very entertaining.

This dance was beyond cute! It turns out, Terra and Marilu have a great chemistry, too. There were so many types of dance included in this Jazz routine. They really utilized the height differences as an advantage.

I thought these two teams really came together and danced with all their heart. As Idina noted, they were magical. In fact, they were so magical, the judges deemed them perfect!

After a great night of performances, everyone seemed to forget a couple had to be sent packing.

This means Marilu & Derek as well as Jana & Gleb were in jeopardy.

The couple asked to leave the dance floor: Marilu and Derek. Jana and Gleb are in the semifinals.

Tom: â€œItâ€™s dangerous out here.â€
Tom: â€œI admire the heck out of you for dressing like a cat.â€
Idina: â€œAm I talking out of my butt?â€
Erin: â€œI mean Holiday Barbie and Megatron.â€
Carrie Ann: â€œNot everyone can rock a green outfit.â€
Laurie: â€œItâ€™s kind of like youâ€™re wiping peanut butter off of him?â€
Tom: â€œWhile you were watching, I was licking the frosting off of my suit.â€
Tom: â€œCan I have that giggle as a ring tone?”

Next week is the Semifinals. The teams are going to have to pull out all the stops to get to the Finals and earn the Mirror Ball Trophy. Make sure you vote! It’s important.

Aftermath Preview: "What the Thunder Said"