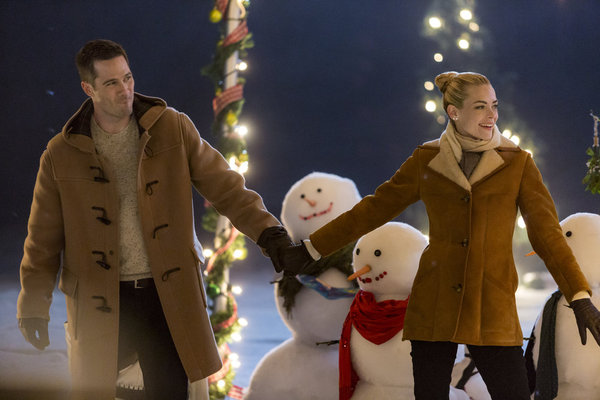 Saturday night, Luke Macfarlane returns to Hallmark Channel’s Christmas movie lineup for the second year in a row with The Mistletoe Promise, based on the book by Richard Paul Evans and co-starring Hart of Dixie‘s Jaime King in her first film for the network. This morning, I jumped on the phone with Macfarlane for a quick chat about the film and his packed project roster.

In The Mistletoe Promise, Macfarlane plays Nick, a Christmas-phobic family law attorney who strikes a pact with fellow phobe Elise (King), who’s trapped in a combative business partnership with her ex-husband that always escalates at the holidays. What begins as a congenial idea to help each other grows into something more as each rediscovers something they’d thought they lost, because, well, Hallmark Channel.

Macfarlane is happy to be in the rotation of talent the network calls on for their movies. “I’ve become a bit of a go-to guy for Hallmark. They’re always very lovely to me, and [the movies are] always fun to make,” he says. “I read the script and said, ‘This one’s funny. Sign me up!’ I had a very busy year, and my mom is more excited about my Hallmark movies than everything I do.”

Fore fans of the novel, he says it’s a bit lighter in tone. “I only heard about the book afterward,” he explains. “We depart from the book in a lot of ways. The book is darker, I’ve been told.”

Unlike last year’s Christmas Land, which found the cast shooting in an early winter in Utah, this film shot in the summer in Vancouver, so the cast was sweltering in their coats and hats. “It was hot, and we’re wearing jackets and trying not to sweat,” says Macfarlane. “I tend to sweat a lot anyway. When we did the ice skating scene, it was in a cold building, so it was like, ‘Oh, thank God.”

Most viewers recognize Macfarlane from his day job on Killjoys, one of our favorites here at TV Goodness. The second season, which concluded in August, expanded D’avin’s role into the larger Level Six mythology. “I didn’t know where he was going. Aaron Ashmore had specifically asked to get information [on Season 2] and I had specifically asked not to,” he recalls.

“Michelle [Lovretta] asked this year [what we wanted to know]. I didn’t know anything about [last year] and I think I will continue not to know. That’s the way I work. I like to be a little bit blind. That could change.”

“I think [in Season 2, D’avin] kind of figured out for himself and the team, ‘This is where I’m needed and this is where I’m useful.’ I think that’s a universal journey. That was exciting. And I loved doing all the fight scenes and I hope to keep doing that.”

He also enjoyed the arc with Sabine (No Tomorrow‘s Tori Anderson) that started casual and light and went somewhere unexpected. “In this amazing sleight of hand, she takes control and is the person in control,” he points out. “I loved working with Tori. It’s actually a testament to our casting that they get these wonderful actors.”

This past summer, The Night Shift fans were treated to Macfarlane’s return in a storyline that had Drew and Rick expanding their family. “They had wanted [me to do] more episodes, and I said, ‘I can’t because of Mercy Street,’ so I flew down on one weekend and we did two episodes,” he recalls.

“That’s the only way we could make it work. It was a bit of a bummer. I’d like to do more. I definitely expressed interest in going back if they get picked up. We’ll wait and see. I love working on that show.”

In January, PBS will roll out the second season of Mercy Street, and The Chaplain will get a mystery of his own. “They gave me some really good stuff this year,” he shares. “The Chaplain has some demons. I got to do a little bit of the stunt choreography I like so much, as The Chaplain. I’ll also tease that there’s water involved.”

This fall, Macfarlane worked alongside a who’s who of Hollywood history to shoot Rock, Paper, Scissors [formerly Rock, Paper, Dead] for Fright Night master Tom Holland. “In an effort to keep my year as confusing as possible. I had to round it off by playing a killer,” he laughs.

“It’s an amazing project. It has Victor Miller, who wrote the original Friday the 13th, and the hair and makeup people are legends in the business. It’s almost more a psychological thriller, so it’s this really interesting psychological thing. I had a blast. I adore Tom. We got along really well. It was truly a positive experience.” [Updated 5/31/19: The movie will land on DVD and Blu-ray on 7/23/19.]

Macfarlane goes back in front of the camera for Season 3 of Killjoys in January, which will return on Syfy next summer. Mercy Street begins Season 2 on January 22nd on PBS.