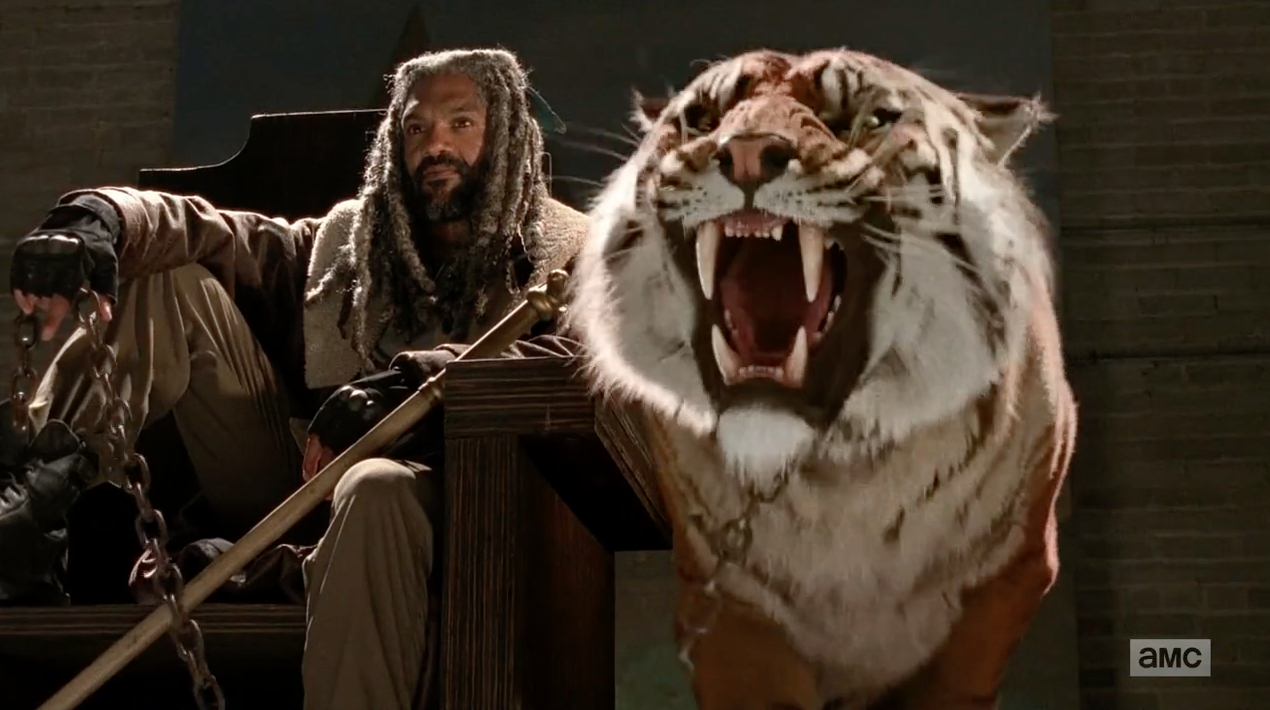 After a brutal start to the season, The Walking Dead took the time toÂ remind us all that there is still good in the world. “The Well” was the perfect follow-up after an episode filled with despair and death. In this installment, we were shown that hope is not completely lost. Morgan and Carol were introduced to The Kingdom, King Ezekiel… and his tiger, Shiva.

The episode began as Morgan and Carol (still wounded) were being led by the mysterious men in armor back to their people. As Carol awoke, she was mystified by everything inside The Kingdom. The look on her face as Morgan wheeled her in front of Ezekiel and Shiva was priceless.

Ezekiel spoke like he was performing Shakespeare, and Carol seemed both amused and annoyed by his persona. Carol immediately turned on her Suzy-homemaker act, but quickly dropped it once outside alone with Morgan. This place was a fantasy, and she wanted out.

Morgan seemed less anxious to leave. I’ve come to realize that Morgan is much more adaptable than a lot of the other characters on the show. He tends to be neutral and doesn’t really judge someone’s leadership style as long as everyone is happy. Ezekiel appeared to take a quick liking to Morgan, already bringing him along on secret runs outside the compound.

Ezekiel and a select group of his people went out to retrieve wild pigs who had eaten walkers. They were to be transported elsewhere. We eventually learned Ezekiel needed to deliver those pigs to Negan’s men. Despite The Kingdom being a peaceful place, Ezekiel is only allowed to maintain a sense of security by keeping his arrangement with The Saviors a secret.

Ezekiel also tasked Morgan with training Ben, a young man in The Kingdom, the ways of aikido. I liked seeing Morgan in this mentor role. He lost his son, and this is probably the first chance he’s gotten to act like a father figure again.

Despite speaking with some members of The Kingdom, Carol still planned on making her exit in the middle of the night. However, on her way out, she ran right into Ezekiel. She continued using her innocent act, by Ezekiel was quick to call her out on her bullshit.

After telling his right-hand man, Jerry, to leave them be, Ezekiel quickly dropped his Shakespearean dialogue and spoke honestly. Carol admitted she thought The Kingdom was a joke. This place isn’t real. What’s behind the walls is the real world.

Ezekiel then went on to explain how he came to be the leader of this group. How he needed to act the part in order for people to feel secure. His rise to King status was due to a lot of talk over how he acquired Shiva. While his people believe he wrestled Shiva into submission, the reality is that he was a zookeeper who had saved Shiva’s life before and after the apocalypse. She became loyal and wouldn’t dare harm him.

I wasn’t sure how I felt at first about Ezekiel revealing his backstory so quickly, but upon reflection, I realized it was the right move. He’s a larger than life presence (partly due to the tiger), so we needed to see that he wasn’t delusional.

In a way, Ezekiel is no different than every other leader we’ve met. They put on a show for their followers and their enemies. Hell, everything about Negan is a performance. He doesn’t act like a psycho for the hell of it. He acts like a psycho to send a message.

EzekielÂ wears a mask just like Carol does. He was able to see through her and knew he needed to turn off his act in order to connect with her. Â He also trusted that Carol would keep his secret. I can see his persona backfiring if his people find out about The Saviors or his past, but in the meantime, he’s lying so he can protect everyone. I can understand that logic.

Despite his honesty, Carol still didn’t want to stay. Also, she couldn’t for the life of her understand why he cared where she went. It’s simple: because it makes him feel good to care. Still, Morgan escorted Carol to an abandoned house she had come across earlier. They came to an understanding and parted ways.

After killing a walker inside the house and starting a fire, Carol heard a knock at the door. It was none other than Ezekiel and Shiva coming by with some fruit. So it seems Ezekiel still plans on staying close to Carol, even if she doesn’t want to live inside The Kingdom.

While I was eager to see what happened to the group after Glenn’s and Abraham’s tragic deaths, I was so happy to have a reprieve from the sadness. Ezekiel’s introduction was a reminder that goodness still exists, and the worldÂ can still be a beautiful place.

Check out a sneak peek of the next installment titled “The Cell.”

Dancing with the Stars "Season 23 Week 8"

It's a "Monster" Reveal on Lucifer

The Following “The Poet’s Fire”