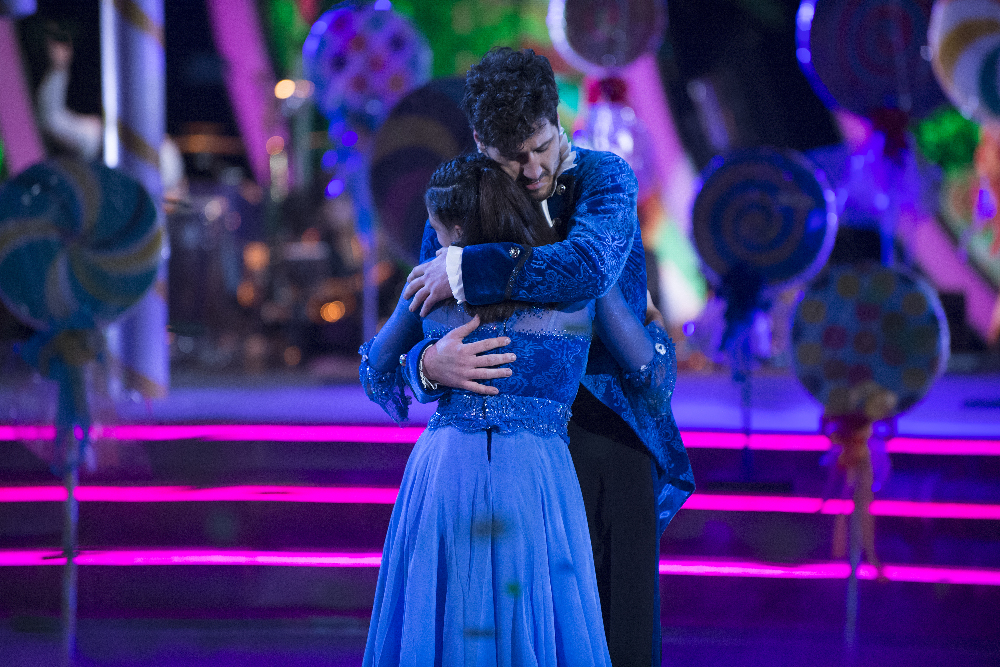 After losing Maureen McCormick and Artem Chigvintsev at the end of last week’s Dancing with the Stars, the competition moved closer to the finale. Monday night was Halloween and the cast didnâ€™t disappoint with their costumes. Even though Len Goodman returned to the judges panel last episode, he was absent for this Immunity/America’s Choice Dance-Off week. In fact, we won’t see him again until the finale. Boo!

Time to break down the dances:

I really enjoy Terra. Sasha has been the perfect partner for her. She works hard and it shows. I think that the scores could have been higher, but I think the judges want her to dig deep and push even further.

This was absolutely a fantastic dance. There are no words to describe it. Actually, here are a couple: stunning and beautiful. Even Val cried! Laurie’s dancing is on par with any professional. If Len had been present, even he would have given her a 10. In the eyes of the Carrie Ann, Julianne and Bruno, Hernandez was simply perfection.

I think Marilu is a lovely dancer but she gets in her own way. There were some small mistakes. As Julianne said, she needs to stop second-guessing herself. This is what she has to fix to get to the finals. I think she needs to trust not only herself but also Derek.

Calvin and Lindsay danced well. There was something I didnâ€™t love about it but I’mÂ not sure what it is. The dancing was on point so I canâ€™t really say anything else. He is proving that with hard work, anything can happen.

Cheryl was super hard on Ryan this week in rehearsal. She basically made a dance boot camp for him. They worked on his posture, which he still struggled with. However he did dance better than last week.

It was very fun, high energy and a lot of splits. However, I didnâ€™t feel it to be a true Jazz routine. Then again Gleb admitted that he had never choreographed Jazz. I think after the red hot sexy Argentine Tango Jana and Gleb have to figure out the best way to use their chemistry.

Sharna got hurt very badly last week and her doctor told her that if she does any more damage she would have to get a complete knee replacement. So as sad as it is, James had to continue on with Jenna Johnson as his coach. Well, those two came out and owned that dance floor. James showed he is the real deal with or without Sharna. He received perfect 10s as a result.

There was a 3-way tie for 1st place. The couple that had the highest cumulative scores would get immunity. James & Jenna did it! This added five points to their scores.

The couples were chosen based on their rankings. Each team that wins the dance-off, would get three extra points.

Laurie and Val chose first and they challenged Calvin & Lindsay. Calvin and Lindsay chose to do the Jive.

Finally, it came down to Marilu & Derek vs. Ryan & Cheryl. They would each have to perform the Cha Cha.

While both pairs did great, I thought Laurie and Val were stronger. Apparently America and the judges did too, because Laurie & Val won!

Jana and Gleb remained sexy and Terra & Sasha were fantastic.

Much like in their earlier routine, Marilu & Derek made a few mistakes. Meanwhile, Ryan & Cheryl were good.

So it came down to Ryan & Cheryl and Terra & Sasha.

The couple leaving the dance floor: Ryan & Cheryl. That means Terra & Sasha are safe. That was a close one!

Tom: â€œA new dance craze that I was unaware of because of all the cat videos.â€
Tom: â€œYouâ€™re hammered at home arenâ€™t you?â€

Julianne: â€œPlease keep calling yourself the Prince of Darkness or whatever that was.â€
Tom: â€œWhat is it about that couple in the cauldron Jacuzzi that is really creepy tonight?â€
Erin: â€œYou know it is a good night when Bruno calls you bendy.â€

Erin: â€œI wonder what Bruno would have done if Tom had taken his shirt off.â€
Tom: â€œI will be taking off my shirt on love handles monthly.â€

Did the right couple go home on Halloween Night? I think so.

The Walking Dead "The Well"

Face Off “Flights of Fantasy”

Once Upon a Time “Think Lovely Thoughts”