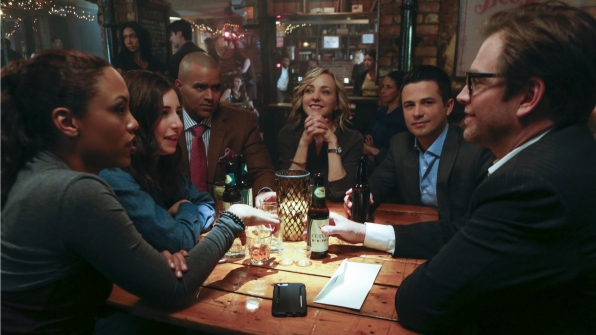 “There was a time when I did cases for money,” Dr. Bull confesses to his client this week. Said client, Richard Fleer (Zach Appelman, Sleepy Hollow) is questioning why anyone would turn down the huge payment his late fiancÃ©e’s parents were willing to pay to guarantee his conviction for her murder in order to take on his pro bono case instead. In fact, Bull’s interest in Richard’s case is actually instigated by the grieving parents’ invitation to sign onto the prosecution’s team as well as the district attorney’s seemingly insurmountable evidence – including a videotaped confession – against the young, blue collar line cook who had met and fallen in love with the daughter of a millionaire.

Marissa is initially confused by his reaction. “Most people hear a man confess to murder and they think ‘GUILTY’,” she points out to him,”You hear a man confess, and you give up a fortune to represent him.” She’s not the only person who thinks Richard’s confession is pretty damning evidence. When pressed, both Cable and Danny feel the the same way and Bull recognizes that destroying the credibility of the confession will be the key to winning the case.

In order to run the game plan, he needs to get Richard’s public defender, Isaac Chambers (Jeremy Shamos, BrainDead) to buy in and give up his initial strategy of making the case about class and money, which isn’t exactly an easy task, but Isaac allows his equality rant to be put off until the case is won.Â “Save your speech until you’re on those courthouse steps,” Bull advises,”with your vindicated client by your side.” Oh, does our hero know how to talk to people, or does he?

This episode pulls from the pattern of the early parts of this season (possibly because this case has a lot of story to tell) and we don’t get to see the usual opening teaser “person on the street” multi-screen interviews which usually set the theme for the show. As the action unfolds, we figure out the nature of “truth” is the crux of the case. Does a confession made under duress remain as “true” as any confession? Under what circumstances is lying understandable? Do we always want to know what is true or just believe what is easy? The theme is elegantly echoed on a lighter note in the banter around Chunk’s new love interest and whether he wants to know what Cable has dug up on him.

Also new for this episode, the jurors for this case need to be screened on their “CoCo” or “coercion coefficient,” how easily they can be swayed by various marketing, questioning, or pressure tactics. During jury selection, they manage to keep the CoCo high on nine of the twelve jurors (and take time out for a little sparkly Marissa/Bull/Cable banter regarding walking off bridges, catching falling damsels, and the inevitability of physics, respectively).

The victim’s parents, the Evertons (Parker Stevenson, Hardy Boys/Baywatch and Suzzanne Douglas, The Parent ‘Hood) are extremely displeased to see Bull obviously assisting Richard’s case in court. Confronting him outside, Bull tries to assure them that he wants and will get justice for their daughter, Layla (Kelcy Griffin, Power), but father Gavin punches him out mid-sentence. Of course, Bull’s taken a punch before and we come back on the scene as he’s walking it off at TAC, with Marissa expressing concern and Benny poking fun.

Danny gets the heavy lifting here (and not the waitress kind like last week) and uncovers not only the true cause of Layla’s fatal head injury but key evidence missed at the scene by the police. When the jury finds Richard not guilty, thanks in large part to rather gray-zone antics in the eleventh hour involving trapping the jury in an elevator (remember, Bull is *not* a lawyer), Danny’s investigation leads the police to the real killer, Dominick (Keenan Jolliff, Daredevil) one of Richard’s friends who was working as a server at the fundraiser that night.

As usual, the closing scene brings the team together to share their victory together (and I love the fact that this team feels like they’d do the same when/if they were to ever lose one). The celebration is made sweeter when Danny arrives to let them know that Dominick confessed, redeeming Detective Murphy (Chance Kelly, Luke Cage) who had gone after Richard on Dominick’s false witness statement. Also, the Evertons were present at the station for the confession and gave Danny an envelope to pass on to Bull, containing the TAC fee in full as thanks for keeping his promise. The windfall is downplayed to a simple statement and a shared toast among the team which is fitting because this case was about the truth, not the money. As Bull told Richard earlier,”There was a time when I did cases for money… and I never want to have to do that again.”

Aftermath "A Clatter and a Chatter"

NYC, Superheroes and the New Man in the Suit, Person of Interest “Pretenders”