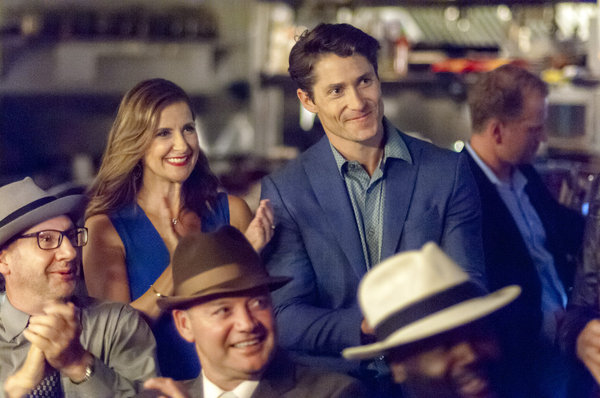 Back when Hallmark Channel was a wee baby network, they had a series of franchise films that included Mystery Woman, which starred Kellie Martin. She did a staggering 11 installments, playing a bookstore owner with a flair for solving mysteries, from 2003 to 2007, and then the moved on to series roles on Army Wives and one-off films like The Christmas Ornament and Hello, It’s Me. This Sunday, she’s back in mystery mode for Hallmark Movies & Mysteries in Hailey Dean: Murder, With Love, based on the Dean novels by CNN’s Nancy Grace.

It’s a return to familiar territory for Martin, but this time out her character comes at mysteries from the perspective of a former ADA who bailed out of the office and pursued a career as a therapist instead. This is the first film in what I believe is a planned series of movies.

Here’s the formal logline on what to expect: Hailey Dean is a bright, disciplined and acutely observant former prosecutor who has found a new way to help others when she becomes a therapist. Always motivated to get to the heart of the matter, Hailey suspects foul play when one of her patientsâ€™ parents tragically dies. Hailey finds herself invested in seeking justice and discovering the truth.

Eyewitness Preview: "Bless the Beast and the Children"

The Strain Preview: "Do Or Die"

Debris Preview: “Do You Know Icarus?”