Bull Shines Up His Halo in “Callisto” 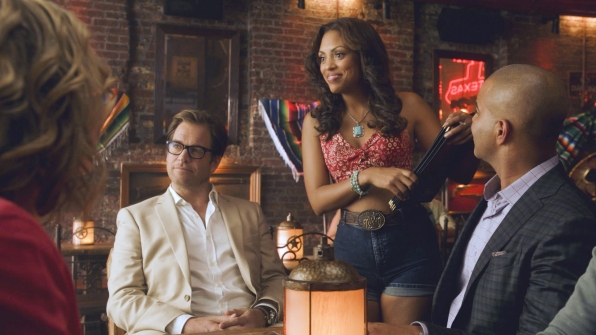 Hot on the heels of the great news that Bull has scored a full-season pick-up(!), we are treated to an episode that really shakes up the team and a case that puts them at every sort of disadvantage imaginable. In order to defend Kerry Ketchum (Barrett Doss, Person of Interest) who has created a drug that can save the lives of people suffering from Haemophilia B, Bull takes his team into the heart of his only “not a win” of his career.

So our intrepid hero is not infallibleÂ after all. In his younger, lone wolf days, our good Dr. Bull met his match in the town of Callisto, Texas, a town that’s made a business out of patent litigation and is “in the legal world,” Bull explains to Chunk,”located somewhere between the sixth and seventh circles of Hell.” The last time he went toe-to-toe in that town, the result was a “deep, personal, downward spiral” aftermath. Fun times.

Right away we know this episode isn’t going to follow the pattern we’ve become accustomed to. The team has to pack up the whole TAC headquarters and relocate to West Texas. And by team, we only mean Marissa, Benny, Chunk, and Bull. Danny is incommunicado “on special assignment” and Bull purposely leaves Cable behind needing her “on the outside”. Splitting up the team? What is Bull thinking?

He warns the team going in that they need to trust him on this case more than ever, that they are facing more than Errol Windemere (Sam McMurray, Devious Maids) the plaintive in the case, they are facing the entire mentality of a town where everyone knows everyone and everyone distrusts outsiders. They are, in his exact words,”an invading hostile force” in the eyes of the town and they must be prepared to be sabotaged at every turn in the case.

Although the team seems to think he’s perhaps gone a little overboard with his “I am your general and I am in full command” metaphor, they soon realize the truth of his words. They arrive in Callisto, only to find their hotel reservation cancelled, luggage lost (to be fair, Bull did explicitly tell Chunk “carry-on only”), no conference area, and the town basically screaming the opposing law firm’s name from every bench, banner, and stadium. Within minutes of arriving, the prosecutor (Jill Flint, The Good Wife) drives by to check them out and make it clear she and Bull have history.

Bull’s preparation borders on the paranoid and rightfully so. He has a homegrown lawyer, Merle “the Pearl” Deavers (Joe Tippett, The Blacklist) lined up to counter the town’s almighty law firm’s “halo” effect. He has all the TAC equipment shipped directly to Merle to prevent it being tampered with and Merle even provides a list of potential mirror jurors. He has sent Danny down ahead of the team undercover as “Courtney Jean”, the new Daisy-Dukes-wearing waitress at the town’s major watering hole. As for a work space, they’re sharing Merle’s barn with some chickens.

The challenges are numerous still. A tornado alarm shortens jury selection and the judge makes pretty arbitrary choices. The chosen jury continues to prefer the prosecutor’s halo to Merle’s. Said prosecutor, Diana Lindsay, also exploits Merle’s weakness for tequila and Bull’s weakness for her to put them each in uncomfortable positions. In Bull’s case, it involves a bottle of bourbon, a cow field, and failing to prevent “Callisto from catching him with [his] pants down” again. To top it all off, the barn headquarters gets burgled while they’re all makin’ like Texans do.

Somehow, it’s all part of Bull’s cunning plan. His notebook and the TAC research laptop is full of red herrings to keep Diana busy. His trueÂ strategyÂ is to simply put Kerry on the stand and have her tell her story, keeping the science talk as simple as apple pie, err… strudel. While successful, there are still hold outs on the jury (according to “Courtney Jean”s intel) so he pulls the pin on a Cable grenade and has her fabricate another tornado warning, sending everyone into the shelter where the acoustics are amazing.

Kerry and Windemere have a private talk while in the shelter (which everyone can hear) and it turns out he isn’t quite the “heartless, money-grubbing, old douche” she thought he was. When they return to the courtroom, where the jury has probably (but not definitely) shifted to Kerry’s side on the case, Windemere drops his action and the case is dismissed. This “not a win” sticks a little in Bull’s craw but his team teases him into accepting it as a “win…with an asterisk.”

The final scene really reinforces the message that has been clear from the start of this series. TAC doesn’t work because Bull is brilliant (which he is). It works because his brilliant mind realized after his first tussle in Callisto that “you can’t take on the world by yourself”. He needed Danny’s undercover skills, Chunk’s southern charm, Benny’s appetite for strudel, Marissa’s keen understanding of the process, and … well, *Cable* to do what he couldn’t do alone: turn the Callisto system against itself and win one for the defendant.

Dancing with the Stars "Season 23 Week 6" a.k.a. Latin Night

Lucifer is All About the "Lady Parts" This Week